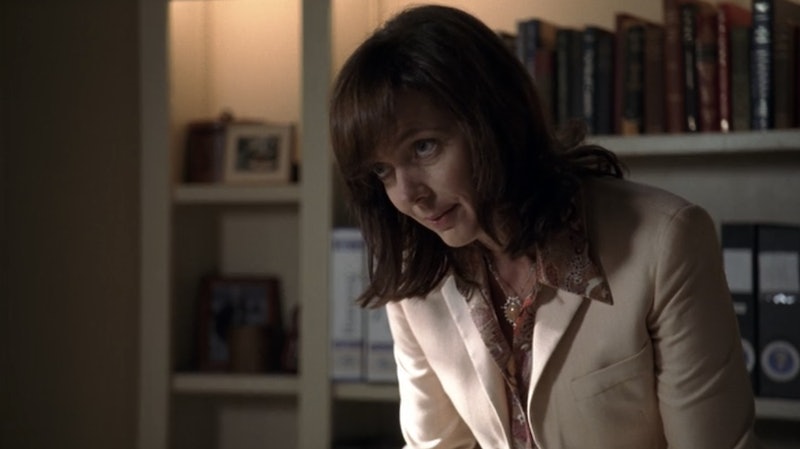 There's nothing quite like that transition from summer to fall. The air gets cooler, your wardrobe gets warmer, and your coffee order gets pumpkin spicier. It's the kind of magical switch that never gets old, much like a certain television show. Even though it's ostensibly about politics, somehow, The West Wing still describes your autumn feels perfectly. The Aaron Sorkin drama has been off the air since 2006, but that doesn't mean it isn't totally relevant when it comes to fall 2017. Whether you noticed it the first time around or not, the show actually has a lot to say about everything from the changing of the foliage to snuggling into that sweater you haven't broken out since last season to having an informal contest with yourself over how many apple cider-themed items you can consume.

The political drama somehow manages to capture all that and more in one tidy little package, without even trying. So take a look at these quotes from The West Wing — from all your favorite characters, naturally — and you'll be feeling like your best autumn self in no time. Whether it's C.J. Cregg saying she doesn't have time for your crap, or Toby Ziegler gleefully owning his reputation as a crab, these people know themselves, and they know what they like. And that's what your transition into fall this year is all about.

It's about feeling free to cancel plans, so you can spend time at home with your bestie Netflix, but at the same time, knowing you have it in you to rally for an out-of-state corn maze. Just like that perfectly crisp fall day, it simultaneously feels like it will last forever, but is over far too soon. So let this cast of characters help you squeeze every last drop out.

1. When You're Wearing Your New Fall Sweater & Nobody's Complimented You Yet

"I'll just walk around some more and see if I can get into a pick-up meeting." — Josh Lyman

Um, hey, guys? We have important business to discuss, and it's the leaf-patterned number I've been rocking all morning.

2. When You've Tried Everything On Starbucks' Seasonal Menu

And you better not let me hear "eggnog" come out of your mouth. That's a winter word.

3. When The Humidity Is Finally Dropping

It will, because it must, but live the dream while it's here.

4. When Your Local Bar Gets A Pumpkin Ale On Tap

It's the little things, baby.

5. When It's A Beautiful Crisp Day & Nothing Can Get You Down

Mrs. Landingham: "How are you, Josh?"

6. When Your Friend Tries To Tell You That Avocados Are A Summer Food

Bartlet: "We'll see you there."

Bartlet: "No, and you know why? Because you made fun of the guacamole."

Avocados are not a joke.

7. When You're Being Super Picky At The Pumpkin Patch

Josh: "This, right here, this is the reason why you have a reputation as a pain in the ass."

Pumpkin-carving is an art, and you must never apologize for that.

8. When You're Subsisting On Candy Corn & Your Friends Aren't Being Chill About It

Mrs. Landingham: "You're not getting enough roughage in your diet. You know I'm right about that."

Bartlet: "I know I'd like to beat you senseless with a head of cabbage, I know that for damn sure."

Had no idea they grew vegetables during harvest time, but this is great intel.

9. When You Stayed Up Way Too Late Watching Scary Movies & Forgot You Have Work In The Morning

"Can I have a couple of aspirin or a weapon of some kind to kill people with?" — President Bartlet

10. When You're Trying To Get Your Friends To Decide On A Group Costume

"Even when they're here in session, getting a hundred senators in line is still like trying to get cats to walk in a parade." — Leo McGarry

Can't we all just go as the Stranger Things cast again?

11. When Your Big Back-To-School Plans Get Away From You

Bartlet: "There was a while there I wanted to be a chemistry professor."

How did I—? But it was like, just the first day and now it's almost midterms already?

12. When You're Trying To Plan A Haunted House Excursion & Everyone's Being Noncommittal & Asking You Why

"'Cause it's next. 'Cause we came out of the cave and we looked over the hill and we saw fire. And we crossed the ocean and we pioneered the West and we took to the sky. The history of man is hung on a timeline of exploration, and this is what's next." — Sam Seaborn

13. When You Forget How Much More Sleep You Need As The Days Get Shorter

Leo: "You look bad. You're tired. You slept in the office. It's Friday. Go home."

Leo: "Because I think you're putting too much faith in the magical powers of a new shirt."

14. When Your Bed Becomes Your Desk

Charlie: "Aren't you supposed to be writing?"

15. When You Forgot To Get A New Coat Last Season When All The Sales Were On

Everybody makes mistakes. Yours are just particularly shivery right now.

16. When You're Going Through A Tough Time But You Know What You Need

Josh: "Just trying to get a little pizza in an uncivilized world."

17. When You're Saying Yes To The World

Abbey Bartlet: "C.J. and I are gonna get drunk. Come on."

Amy Gardner: "The First Lady just asked me to get boozy with her. You don't think I want to write a book one day?"

Slip on your ankle booties and get out there.

18. When It's Cuffing Season, But You're Loving That Single Life

I already have a boyfriend — his initials are PSL.

"I have wit, I have charm, I have brains, I have legs that go all the way down to the floor, my friend." — Amy Gardner

So what if we love fall?

19. When You Promise Your Friend to Save Her The Last Apple Cider Donut

"We will do what is hard. We will achieve what is great. This is a time for American heroes and we reach for the stars." — President Bartlet

You can start the slow clap whenever you're ready.

20. When Instagram Is Populated Solely By Couples Doing Couple-y Things

How did everyone in the world know to go apple-picking on the same day?

21. When Someone Tells You That The Next Season Is Winter

OK, so this isn't a quote as much as it is a lack of words. But we're feeling very attacked right now.

And there you go, now you're prepped and ready for any autumn-themed scenario that could possibly come your way. Thank Aaron Sorkin, and go live your best life.

More like this
The Best 'Grey's Anatomy' Intern Moments, From MAGIC to Glasses
By Grace Wehniainen
24 Years Ago, 'Friends' Dropped Its Most Underrated Ross & Rachel Episode
By Grace Wehniainen
The 'Skins' Cast Shared The Reunion We’ve Been Waiting For
By Sophie McEvoy
Netflix Reveals First Look At Wednesday In The 'Addams Family' Spinoff Series
By Bustle Editors
Get Even More From Bustle — Sign Up For The Newsletter