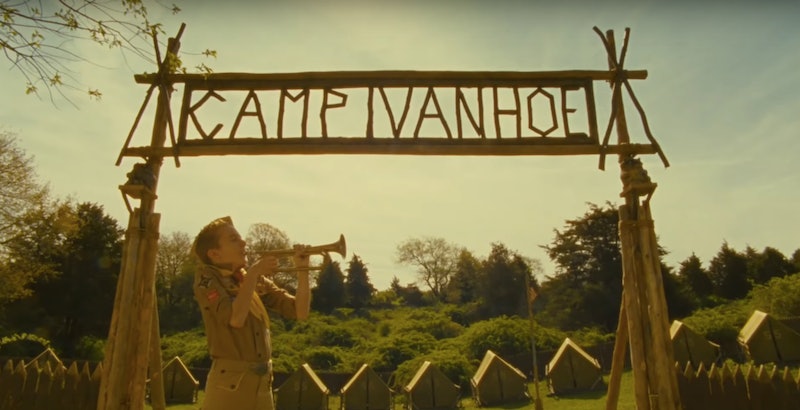 There's something about summer camp that makes it a go-to setting for movies and TV shows. Maybe it's because when you're away from home and feeling free, anything can happen: first love, meeting a long-lost twin, an alien invasion. But whether they're comedies, coming of age stories or horror, there are a ton of movies and shows about summer camp... or at least featuring a summer camp.

With summer approaching, you might want to watch a a few of these to get into the spirit of the season. Perhaps you were a camper yourself and you want to reminisce about your own days at camp. Or maybe you're just craving something nostalgic, in which case, summer camp adventures are a good call if you're a child of the '80s or '90s — camp movies and TV shows were all the rage. (If the Salute Your Shorts theme just popped into your head, feel free to scroll down now and sing along to the intro video.)

Regardless of why you're looking for something about camp — to watch yourself, to show the kids in your life, to remember whether the Olsen twins were meant to be playing actual twins in It Takes Two (they weren't) — here are 22 summer camp movies and shows for your perusing pleasure.

The Parent Trap isn't entirely set at a summer camp, but it is key to the story: Annie and Hallie have to meet at summer camp in order to change places and get their parents back together. Enjoy baby Lindsay Lohan's English accent.

And in the 1961 version, it's the same deal. Only this time, the twins' names are Susan and Sharon, played by Hayley Mills.

Sticking to the twins theme, It Takes Two stars actual twins Mary Kate and Ashley Olsen as... not twins. Nope, they just are two girls who meet by chance, look exactly the same, and try to make two people fall in love.

Salute Your Shorts is a series that ran for two seasons on Nickelodeon and is all about a group of kids at a camp called Camp Anawanna. If you ever caught the series, the kid playing the trumpet in the intro above will really take you back.

Bug Juice is a Disney Channel series that aired starting in the late '90s. Unlike Salute Your Shorts, this one is actually a reality show, with each season centered around a different camp in a different state. As the very literal theme song above says, "real kids, making friends, having fun."

This made-for-TV movie from 1990 features a who's who of '80s and '90s TV stars: Jennifer Aniston, Candace Cameron Bure, Danica McKellar, Jaleel White, and many others.

Heavyweights is about a "fat camp" being run by an evil counselor played by Ben Stiller. But the kids just want to have fun, so they seek revenge on him and eventually come out on top.

This 2008 Disney Channel movie stars the Jonas Brothers and Demi Lovato, and makes you realize how long ago 11 years really was — look how young everyone is!

In the Camp Rock sequel, the gang returns for another summer at Camp Rock, and this time, they have to compete against Camp Star.

A 2001 movie set 20 years earlier, Wet Hot American Summer is about a group of camp counselors and a bunch of wild antics. While it didn't do very well when it first came out, it became a cult classic and led to...

In 2015, Netflix released Wet Hot American Summer: First Day of Camp, a series that is a prequel to the original movie. And then that led to...

2017 brought another reunion. This time, the cast returned and made their way to 1991.

Two preteens fall in love and run away together, with one of them escaping from his troop at summer camp, who try to track him down.

14. The Sisterhood Of The Traveling Pants

The Sisterhood of the Traveling Pants is not about camp, but one of the girls does go to a soccer camp for her summer adventure and the pants do travel there, so it counts.

They might do a lot of regular babysitting during the school year, but as the movie shows, in the summer time, the Baby-Sitters Club have their sights set higher: a day camp for the kids they watch.

It's probably pretty clear to you that this one is not entirely about a summer camp — if it's not, watch the trailer — but, Wednesday and Pugsley do attend a summer camp in this sequel to The Addams Family.

Bunk'd has been running for three seasons on the Disney Channel and is a spinoff of a show called Jessie. In Bunk'd the main characters are kids who leave New York City life behind to attend a camp in Maine.

Unfortunately, the best clip available for this movie doesn't explain anything about the actual plot (though it does have a tiny Andrew Keegan), but Camp Nowhere is actually about a group of kids who make up a camp and trick their parents into sending them to it. The title makes sense now, right?

Yep, this one is just called Camp. It's about a theater camp... but the drama happens offstage. Zing! Fun fact: It was Anna Kendrick's first movie.

And there was a TV show called Camp, too. (No relation to Camp the movie.) This show, which aired for a season on NBC, centered around a summer camp director.

While Friday the 13th takes place at a camp, suffice it to say that you shouldn't watch this if you only are looking for a light and fun summer camp movie.

This new Netflix movie isn't out just yet, but it's landing on May 24. It involves a group of campers who come together during an alien invasion.

Some of these movies and shows might be harder to track down than others, but if you do watch the one of your choosing, enjoy your virtual time at summer camp!

More like this
Netflix Reveals First Look At Wednesday In The 'Addams Family' Spinoff Series
By Bustle Editors
A New 'And Just Like That' Table Read Pic Confirms A Key Character's Return
By Jack Irvin and Grace Wehniainen
What’s New On Netflix: Ana De Armas’ 'Blonde' & A Nick Kroll Special
By Arya Roshanian
A New Scooby-Doo Movie Confirmed Velma Is Gay & Twitter Is Pumped
By Radhika Menon
Get Even More From Bustle — Sign Up For The Newsletter