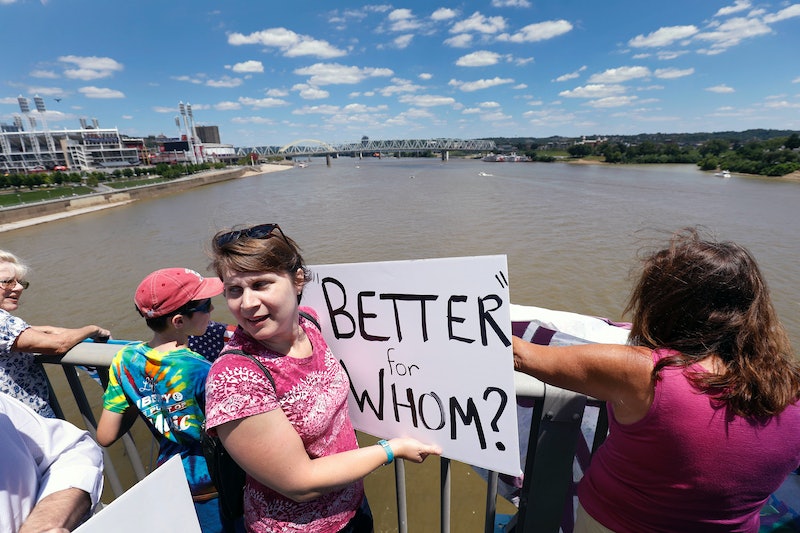 Since March 22, 2010, one day after the Affordable Healthcare Act, or Obamacare, passed, the GOP has been working toward removing it. Over seven years later, precious time that could be used to debate and pass legislation to better the lives of Americans, has been pushed aside to continue the fight against Obamacare. I know that I'm sick of it — and so is The Women's March. This week the organizers of The Women's March announced a rally this Saturday in partnership with Our Lives On The Line, a pro-Obamacare group that's working to increase action against the Republican health care bill.

The idea is to encourage supporters to "show up on a busy street corner" on Saturday and "make some noise" about the GOP bill. Instead of having one big march, this allows anyone, anywhere to get involved and take a stand. Interested in joining the movement this Saturday? You can see a list of locations here and, if none are nearby, you can organize your own local event with this form here.

The non-partisan Congressional Budget Office determined that the original senate bill to repeal and replace Obamacare would have cost 22 million people their healthcare. Even one person having healthcare taken away is unacceptable, but the GOP was happy to take it from 22 million — an atrocity. Then, after significant failures to do so, Mitch McConnell stated that the senate would instead vote only to repeal Obamacare, ignoring the 30 million people who would lose healthcare over the next decade.

We must stand up and protect the literal lives of each person living in America. Organize on Saturday as we fight for our basic right to have access to healthcare. Read on for creative sign ideas to bring to the healthcare march.