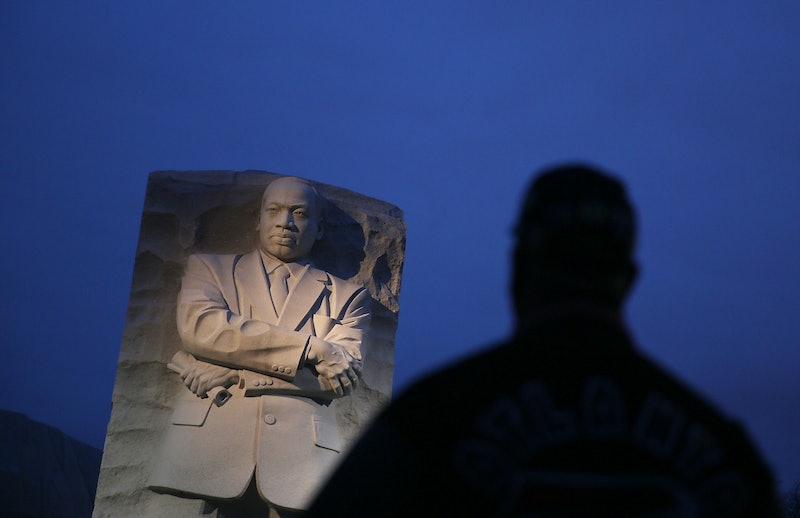 It's important to remember, as our first black president leaves office, that a new president who promises racism, sexism and xenophobia moves in. And on Monday, a day to celebrate Dr. Martin Luther King Jr., one of the most well-known civil rights leader in American history, Twitter did not forget that fact. Throughout the day, people posted dozens of MLK memes and tributes showing support for the leader and the legacy he left behind.

Martin Luther King Jr. Day is celebrated on the third Monday of January, in an attempt to be close to his birthday, Jan. 15. This year, the day kicked off with a breakfast in his honor headed by a speech by close friend and civil rights ally Rep. John Lewis, who explained how King personally impacted his life:

If it hadn't been for Martin Luther King Jr., I wouldn't be a member of the House of Representatives since 1987 ... he freed us he helped liberate us to make our nation a better place, to make our world a better place.

Lewis gave the speech amidst heat between himself and the next president, but avoided going down that rabbit hole and instead steered toward a message of hope:

Never give up, never give in. Stand up, speak up. When you see something that is not right, not fair, not just, you have a moral obligation to do something, to say something and not be quiet ... the scars and stains of racism are deeply embedded in American society.

The powerful words — and the tributes posted online — were an echo of the message of the most famous civil rights leader this country has known.

Hate Cannot Drive Out Hate, Only Love Can Do That ...

I've Been To The Mountaintop ...

The "Free At Last" Moment

The Letter From Birmingham Jail

Freedom Is Never Voluntarily Given By The Oppressor

Injustice Anywhere Is A Threat To Justice Everywhere

I Have Decided To Stick With Love ...

What Are You Doing For Others?

The Day We Become Silent

The Ultimate Measure Of A Man ...