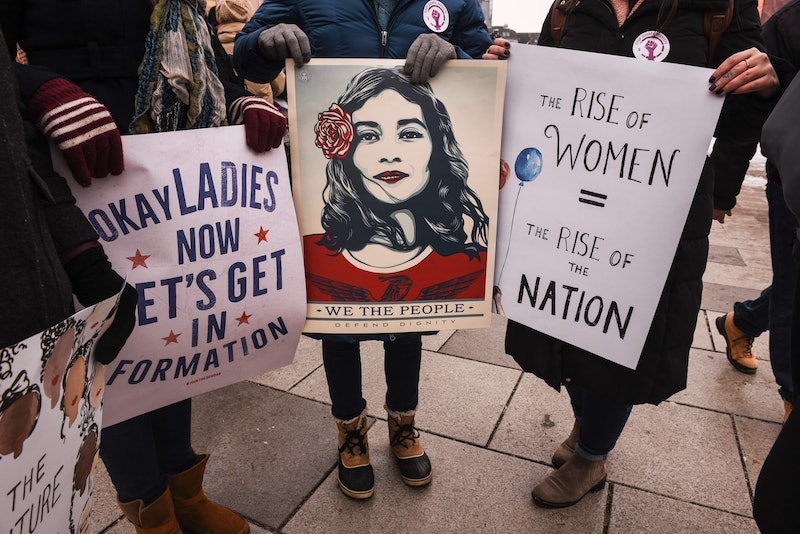 Although the official Women's March on Washington took place in America's capitol, hundreds of thousands of women banned together Saturday across both the nation and the world to march for their rights. Although some people seem to think that the march is a direct shot at President Donald Trump, the purpose as stated by the organizers is really to show the government that women's rights are just as important as men's. In that vein, many women have been spotted carrying signs of empowerment and feminism at the Women's March.

Even before the march began Saturday morning, women packed the train stations and buses in D.C. According to NBC Washington, the march organizers revised their estimated attendee count to around 500,000, which is 300,000 more than was originally expected. And more than 600 sister marches are taking place all over the world.

Rather than center upon the "not my president" rhetoric that has become a popular rallying cry, the Women's March is more focused on equality. A New York Woman's March organizer told Gothamist, "We're defending equality. It's not a bash session. We're standing against intolerance. So we're there the day after they're in office, saying, not just to [Trump], but to the whole administration, saying we're here, we're watching."

While there are certainly some participants who are specifically against Trump, the overall sentiment of the event is about standing up for the rights of the most vulnerable: women, immigrants, and the LGBT community. Here are some empowering and progressive signs from the marches that will get you motivated to stand up for women throughout the next four years.

5. Sorry For The Inconvenience

9. Women Won't Back Down

14. Boys Will Be Good Humans

22. A Woman's Place Is In The Revolution

28. Rage Against The Patriarchy

29. Legislate Your Own Body

The women marching around the world for their rights are inspiring, and so are the messages they carry with them.