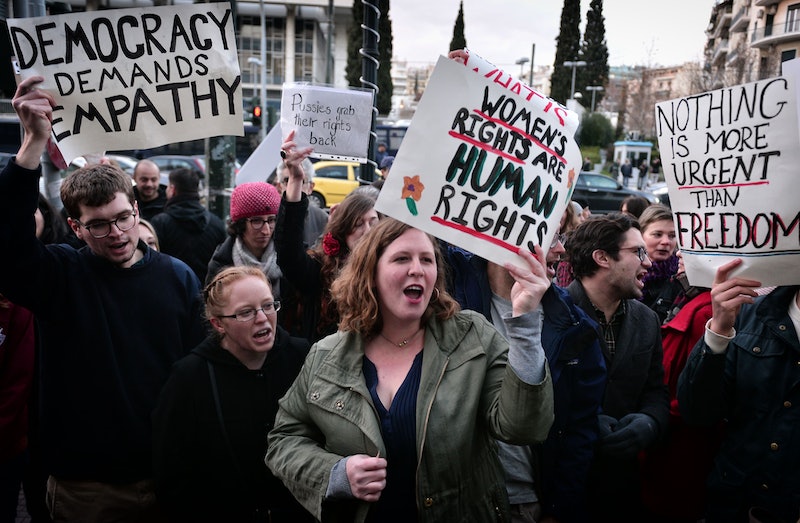 On Saturday, city streets, news broadcasts, and Instagram feeds filled with support for the Women's March on Washington and its sister events around the world. The events brought famous faces and average Americans together in support of women's rights and diverse communities just a day after the controversial inauguration of President Donald Trump. While the main event took place on the same grounds as the inauguration, in Washington, D.C., marches happened everywhere — and newspaper front pages celebrated the Women's March at home in the U.S. and abroad.

An estimated 500,000 people attended the official Women's March on Washington, but it seems that more than 2 million people participated across the country. In fact, events took place in every single U.S. state, from the snow-filled streets of Alaska to the sun-filled parks of Florida and everywhere in between. Beyond the U.S., marches were organized in foreign cities such as London, Mexico City, and Sydney. In each city that held an event, popular landmarks and downtown streets were filled with bright-colored signs, motivated speakers, and plenty of T-shirts bearing feminist sayings.

The action on Saturday inspired a deluge of social media posts and responses from lawmakers. But the message of female empowerment didn't begin or end on Saturday. As it turns out, planning, promoting, and pulling off the Women's March on Washington and in other cities led to some motivational and iconic newspaper front pages.

In Atlanta, some 60,000 people reportedly marched for women's rights.

The Baltimore Sun's front page directed readers to several Women's March stories on the inside pages.

To make march news even sweeter, The Boston Globe's lead image was reportedly shot by a female photographer.

By size and enthusiasm, crowds in Chicago appeared to rival those of other major cities.

According to The Cincinnati Enquirer, the local women's march drew thousands.

The Columbia Missourian's front page celebrated the Women's March in Columbia and local women who made the trek to D.C.

Schenectady's Daily Gazette showed scenes from yet another part of New York.

Like the Boston Globe, The Dallas Morning News reportedly featured the work of female journalists in tribute to Saturday's marches.

An aerial shot of downtown Denver showed the city's solidarity with women around the world.

Women's March coverage dominated Detroit's front page, with coverage of the new president and other headlines falling to inside pages.

Snow fell on Boise's women's march, but The Idaho Statesman reported that 5,000 people still turned out.

According to The Independent's front page, marchers in London carried signs with such messages as, "Dump Trump," and, "Choose love."

The Journal Gazette in Fort Wayne, Indiana, showed the feminist crowd outside the White House.

The Los Angeles Times' front-page image was as massive as the marches.

It's a good day when the headlines in New England include football and feminism.

Marchers in Miami were likely warmer than marchers in the nation's capital, but they were unified in message.

The Women's March made news all the way on other side of the world in the United Arab Emirates.

The scene in New York City showed that the future is definitely female.

In addition to the powerful lead photo and headlines, the U.K.-based Observer issued a scathing statement on Trump.

The front page in Providence, Rhode Island, was like something out of a feminist's scrapbook.

As the front page was emblazoned with women's march images, the Union-Tribune's editorial board was looking for personal stories.

Remember that image of the Capitol. It's going to be historic.

As the Scottish media put it, Saturday's marches drew the "women of the world."

From Minneapolis came an uplifting message: "We are here!"

In Ireland, an American flag and a scene from D.C. made front-page news.

Fittingly, D.C.'s own newspaper displayed images of crowds in the District and across the country.

Clearly, the news of Saturday's marches spread well beyond the District. Front pages from around the world chronicled the events, generating historic headlines and photographs. Thanks to marchers and the news headlines they inspired, Trump's first day in office was tumultuous, to say the least.