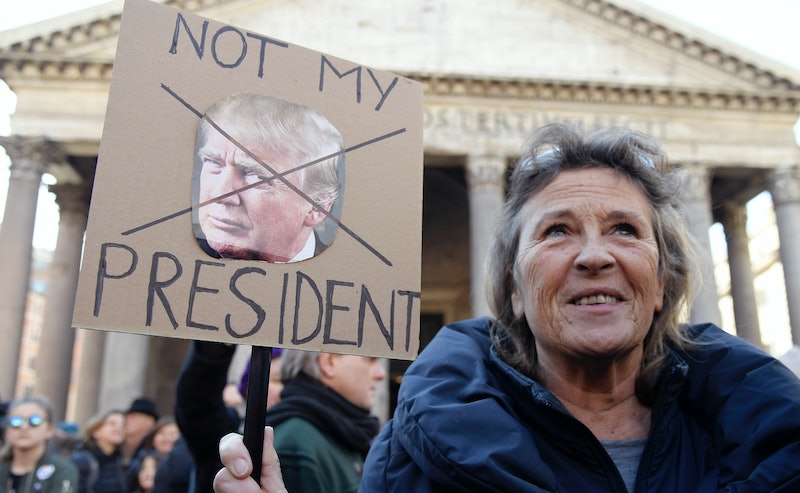 For anyone wondering if activism comes with an age limit, look no further than the Women's March on Washington. In hundreds of cities around the world Saturday, hundreds of thousands of protesters took to the streets to show the incoming White House administration they wouldn't stand for any attempt to roll back the rights of women or other marginalized groups. While each Women's March participant undoubtedly had their own individual reasons for marching, they might not have been there at all if it hadn't been for one retired grandmother. Yet older women's participation in the Women's March on Washington didn't end there. Older women were spotted marching for women's rights cities around the globe, proving that activism has no age limit.

Shortly after the election of Donald Trump, one grandmother took to Facebook with a simple idea. "I think we should march," Teresa Shook reportedly wrote in the political group Pantsuit Nation. Although Shook didn't know it at the time, her post – and the Facebook event page she later created – would evolve into one of the largest demonstrations planned around Trump's inauguration.

Here are 38 times older women at the Women's March proved activism has no age limit:

A new take on the Pink Ladies girl gang.

We Are The Majority

May I also point out her ingeniously DIYed snack bag.

The Couple That Demonstrates Together, Stays Together

When it comes to demanding equal rights, there's no such thing as retirement.

67-year-old Sen. Elizabeth Warren is a tireless advocate for women's rights in Congress.

This Grandma Is Fired Up

This grandma is fighting for peace.

At 66 years old, Sen. Patty Murray is committed to standing with women and marginalized communities.

This abuelita isn't having any of Trump's nonsense.

This woman is protesting at 90 years old. Needless to say, she's the perfect role model.

This marcher wasn't shy about sharing her opinion of the new president at the Women's March on Washington.

Even Great Grandmothers Showed Up

This great grandmother spent some quality time with her great granddaughter at the Women's March.

Fired Up, Ready To Go

Who knew two simple letters could hold so much meaning?

Nobody said being a nice woman meant you couldn't share your political opinion.

It's the younger generation that inspires this woman to march.

The losses these women have experienced are unimaginable, but they are so strong.

Women at the Women's March on Washington in Washington, D.C. are saying no more wire hangers.

At 70 years old, singer Cher proves age is nothing but a number.

This woman knows there are a multitude of ways to "make America great again."

A few wise words from a grandmother at the Women's March.

Women of all ages have been inspired by the Women's March on Washington to show up for women's rights.

Bundled Up & Ready To Go

Activism looks great at any age.

Nothing like spending quality time with grandma at a sister march.

This puts the potential challenges to come into perspective.

When they go low, this woman from Colorado can show you how to go high.

Let Her Drop Some History On You

Girls Day At The Women's March

Grandma and company are ready to voice their demands.

When Grandmothers Stop Being Polite

... and start getting real.

This woman is standing up for Planned Parenthood.

The president works for the people, all of them.

The All-Female Take On Mt. Rushmore

Another woman making history at the Women's March on Washington.

We Will Not Be Silenced

This group of women are fired up and ready to go.

Cheers to all the grandmothers turning their anger into action.

Who says you can't stop to snap a picture or two with your fellow marchers?

From young girls with dreams of being president to 100-year-olds looking to preserve the rights they fought hard to gain, the Women's March on Washington welcomed participants of all ages.

'I've Been Waiting For You'

Ninety, Nasty, & Not Giving Up

Nasty women of all ages unite!

This older woman doesn't want to see her granddaughter's reproductive rights rolled back.