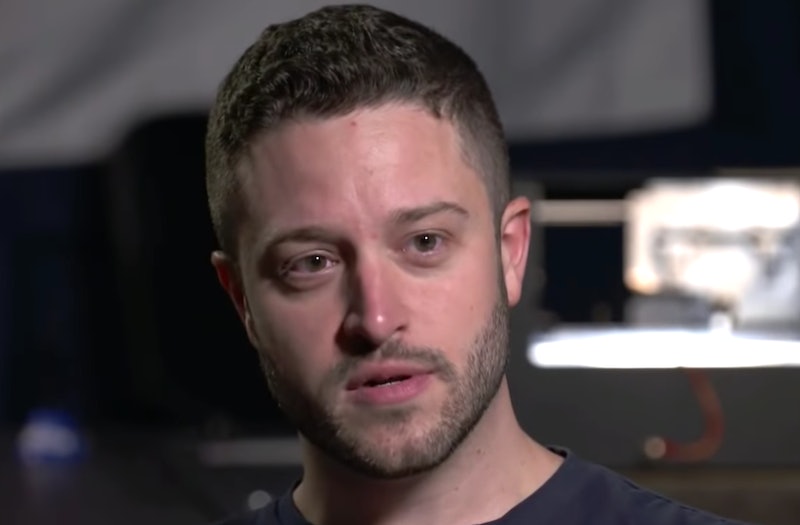 After being extradited back to the United States over the weekend, Second Amendment activist and 3D gun designer Cody Wilson will face sexual assault charges. Texas authorities allege that Wilson had sex with a 16-year-old girl and then left for Taiwan after police were notified about what happened. Wilson is being held in Houston and has not yet responded to the allegations. Bustle has reached out to representatives for Wilson for comment.

As of Sunday morning, Wilson is being held on $150,000 bail in Harris County Jail, according to Texas-based NPR affiliate KUT. He is accused of having sex with the girl at an Austin hotel after meeting her on the website SugarDaddyMeet.com, per The New York Times. He allegedly paid her $500 in cash, according to court documents obtained by The Times. After the alleged incident, the girl reportedly relayed the events to a counselor, who then contacted police.

One of the girl's friends told Wilson that the police had been notified, Austin Police Commander Troy Officer said in a press conference last week. According to Officer, Wilson then traveled to Taiwan, though it was not immediately clear whether his departure was an attempt to evade charges. However, according to Officer, the charge against Wilson is a second-degree felony, punishable by up to 20 years in prison if he's convicted.

Taiwan does not have an extradition treaty with the United States, though local authorities cooperated with the investigation, according to multiple reports. Wilson was arrested in Taiwan on Friday, according to USA Today, and then returned to Texas over the weekend. He is expected to eventually be transported from Houston to Austin, according to several reports.

Wilson rose to prominence as the founder of the company Defense Distributed, which has been embroiled in an effort to provide blueprints for 3D guns for free online. After a multi-year legal battle, a federal judge ruled in August that Defense Distributed could not post such blueprints for free online, after which Wilson said that he would mail the blueprints to customers instead. The sexual assault charges against Wilson are not directly related to the fight over 3D guns, but, according to USA Today, a conviction could ban Wilson from owning firearms in the future.

3D printed guns are controversial because they are untraceable, with many calling them "ghost guns." Though printing such guns would be costly, and would require access to high-tech 3D printers, they have proven to be incredibly popular, at least in concept. When Wilson first posted blueprints for them online back in 2012, for example, they were reportedly downloaded an estimated 100,000 times before the website was blocked under international exports law.

Over the summer, as courts considered yet again whether Wilson's company would be allowed to provide such blueprints to the public, opponents argued that they would make it easy for criminals to obtain their own untraceable firearms. Nineteen states ultimately sued the Trump administration in an effort to block the blueprints from being published. A federal judge blocked their publication at the end of August.

More like this
Chris Kaba's Family Continue Fight For Justice After Viewing Police Bodycam Footage
By Sophie McEvoy
After The Bling Ring, Nick Prugo Was Embroiled In Another Scandal
By Arya Roshanian
Mel B Speaks Out Against Domestic Violence In A Powerful Speech
By Sophie McEvoy
Women Around The World Are Cutting Their Hair In Solidarity With Mahsa Amini
By Darshita Goyal
Get Even More From Bustle — Sign Up For The Newsletter