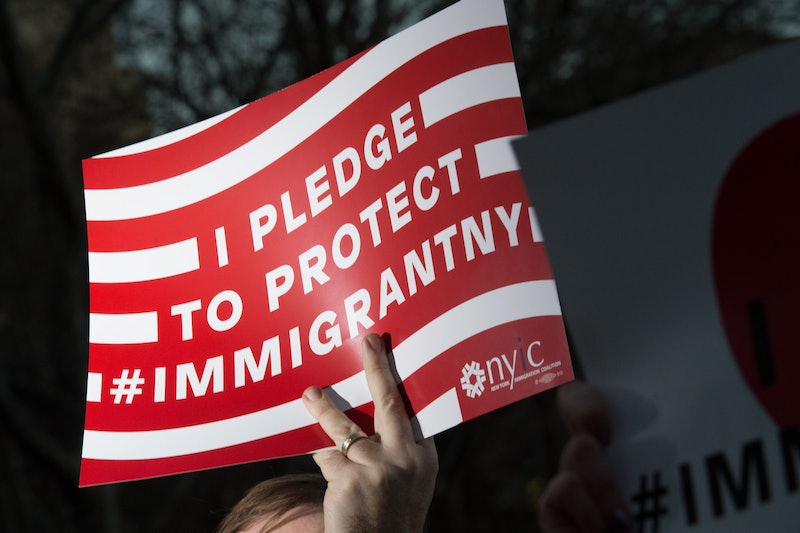 On Jan. 25, President Donald Trump signed executive orders related to the construction of a wall along the Mexican border and immigration at the Department of Homeland Security. But, thankfully, it's just not possible to build a wall without funding — at least not yet. This means you have some time to protest Trump's famous United States-Mexico border wall, so that his campaign promise doesn't become a reality. And chances are, you won't be the only one resisting the anti-immigration package. According to a recent Pew Research Center poll, only 39 percent of Americans support building a border wall. It's safe to say, then, that its construction isn't in the majority's interest.

Those who agree with Trump's statement on ABC News that "A nation without borders is not a nation" should consider the fact that millions of taxpayers will have to shell out money to build it. If funding for the wall is approved, it will likely cost billions of dollars. One study from MIT pegs the cost to be between $27 billion and $40 billion, while a study by research and investment firm Bernstein cites a lower figure of $15 billion to $25 billion, NPR reported. Of course, if Trump decides he would rather build a fence, it'll likely cost $3.5 million a mile, according to NPR. But considering the border is approximately 2,000 miles long, building a fence would still be quite expensive. Here's how to exercise your American right to free speech and protest Trump's border decision.

Our country was technically founded with a separation of powers, meaning that Congress decides whether to spend taxpayer money on a border wall. So now is the time to contact your representatives and make sure they know you're against the wall. If you don't have your congressperson on speed dial, you can check out this directory of representatives. There are also plenty of free apps and websites out there that you can use to get the information, keep track of what's going on in the legislative branch, and even get scripts for what to say to your representative when you make that call.

Organizations that support the rights of immigrants will need all the help they can get in the coming months to fight the wall. Here's a list that includes some pro-immigrant non-profits and here's another list of border advocacy groups you can get involved with. If you don't have money to donate, you can donate your time, and vice-versa.

Since news broke that Trump signed the executive orders, people around the country have been protesting his decision. You can find protests and marches near you through social media, such as events advertised on Facebook and Twitter. By demonstrating to your representatives that you will not stand for the wall, you'll make them more likely to vote against funding it. You'll also be standing in solidarity with immigrants.

Sanctuary cities shelter undocumented immigrants by not enforcing federal immigration laws. Trump has attacked sanctuary cities by signing an executive order to "strip federal grant money from the sanctuary states and cities that harbor illegal immigrants," press secretary Sean Spicer told CNN. If your city is a sanctuary city, let your city representatives know you would like it to stay that way, whether through phone calls, protests, or petitions.

If you don't think making your voice heard on the border wall issue will make a difference, consider that your strongest tool when it comes to influencing your representative's decisions is your vote. If many people make it clear that they won't vote for someone who supports building a wall, that politician is less likely to put their hopes of being reelected in jeopardy by going against the public's views. Here's to making sure our politicians are working to further our interests.