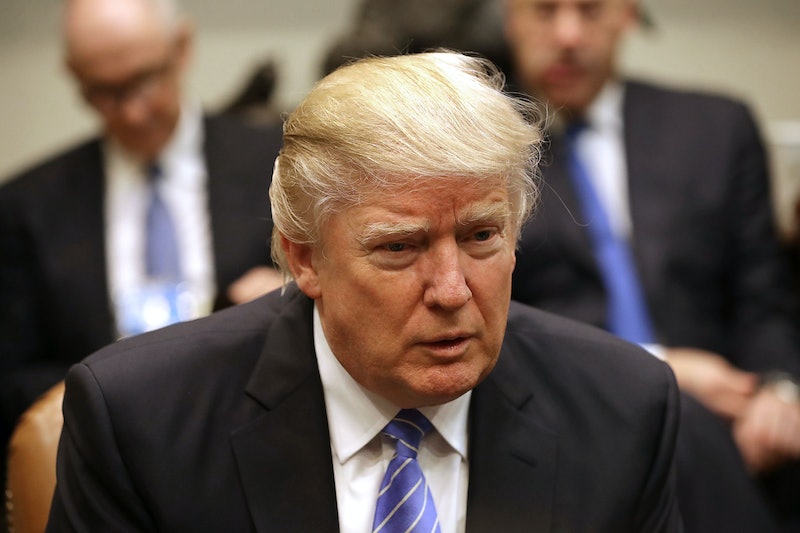 Since he became president days ago, Donald Trump and his team have already opted to remove the civil rights, climate change, disabilities, and LGBT pages from the official White House website. Trump has also signed an executive order reaffirming his commitment to dismantle Obamacare, and executive orders on Israel, the economy, and immigration could be coming up next. As we try to prevent the Trump administration from taking away our basic rights, Saturday's Women's Marches offered one form of resistance; signing White House petitions could be another.

A petition is not, of course, the only way to fight for concrete change. However, it can serve as a direct line to the White House, and we must do our best to get elected officials' attention on the issues we care about. So, listed below are some petitions you should consider signing.

This petition demands that Trump resolve his conflicts of interest in one of two ways: either by divesting his financial and business holdings, or having these holdings placed in a truly blind trust. As of early Monday afternoon, this petition had 77,609 signatures, which means it's not too far from achieving the 100,000 signature goal.

This petition urges the Trump administration to reinstate the official pages for all of these issues on the White House website and thereby prioritize "the rights of all Americans and our climate by re-enacting policies that address all of the aforementioned issues." Although these pages were archived on the Obama White House site, the fact that they vanished shortly after Trump's inauguration is an indication of the new administration's priorities. As of early Monday afternoon, this petition only had 196 of the necessary 100,000 signatures, so it could use a lot of support.

Do Not Defund The NEA Or NEH

This petition protests Trump's rumored decision to defund the National Endowment for the Arts and the National Endowment for the Humanities. The petition states that "funding for the national endowments are a minuscule portion — 0.004% (!) — of the nearly $4 trillion federal budget." Therefore, the petition urges the Trump administration to reconsider this possibility, because defunding the NEA and NEH would prevent artists and educators from securing necessary grants. This petition currently has 384 signatures, so it needs many more to get to 100,000.

Although Trump once dismissed climate change as a hoax invented by China, this petition optimistically urges the Trump administration to invest in clean energy while simultaneously creating jobs and boosting the American economy. It only has 173 signatures so far, but given just how critical a threat climate change poses, it is important it accumulates more signatures as quickly as possible.

And A Non-White House Petition

The White House is not obligated to respond to this petition, but it is still important. CREDO Action launched a petition addressed to Senate Democrats, letting them know that Betsy DeVos is not qualified to be secretary of education. The petition, which has received 174,175 signatures out of the 200,000 it's aiming for, argues that appointing DeVos would put the Department of Education as well as the American public school system at risk.

These are just five of the many petitions circulating to resist Trump and his administration. These petitions are just the first step; we still have a lot of work to do.