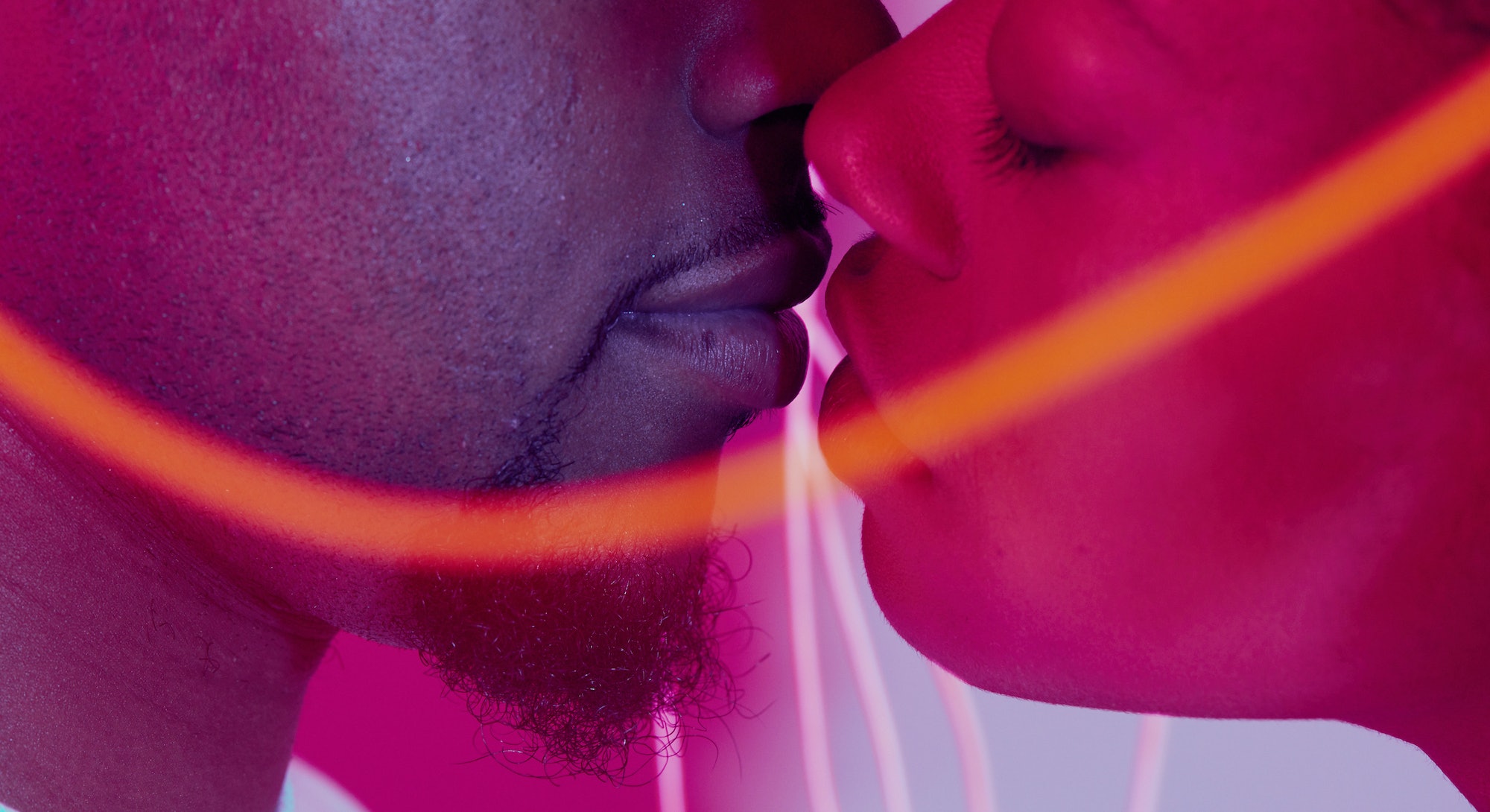 For the month of September, Bustle’s Sex TBH package is talking about sex, honestly. We’re delving into how women approach the things they’re taught to be shy or embarrassed about in the bedroom — and, in doing so, we're liberating people to live their best (sex) lives. Let’s do it.

Few things in life are more fun to talk about than sex — or more awkward. And while gabbing candidly about sex with your three closest girlfriends over quiche has become something of a pop culture cliche over the years (thanks, Sex and the City), there are some parts of your sex life you’d probably rather not discuss… ever. Because, let’s face it: while we’ve certainly made some strides toward removing the shame and stigma too often associated with matters of women's sexuality, talking about sex is still embarrassing sometimes, no matter how much of an open book you consider yourself to be. So what’s tripping us up the most? Bustle surveyed 500 women between the ages of 18 and 44 to find out what they’re most uncomfortable talking about when it comes to sex — and, well, there's a lot to unpack.

Even if you aren't comfortable divulging every juicy detail of your last hookup, experts say talking freely about your sex life can have some surprising benefits. "Having some friends to talk about your life with, including your sex life, is important," Rachel Needle, Psy.D., licensed psychologist and certified sex therapist in West Palm Beach, Florida, tells Bustle. "Talking about your sex life with some friends can help bring you closer together, ask questions and learn from each other, and build trust.”

The biggest thing we're not talking enough about? According to 22 percent of Bustle respondents, that would be anorgasmia, or inability to orgasm. It makes sense, too, that this is one issue so many women are eager to discuss; research shows anorgasmia affects between 10 to 15 percent of women, and other data reveals between 10 and 20 percent of women have never experienced an orgasm, ever. And when we talk about orgasms as if they are the ultimate goal of sex, we're often silencing women who physically aren't able to orgasm or orgasm easily by making them feel like the problem is them — and not the way we talk about sex in the first place.

Clearly, there are things we need to talk about — but unfortunately, that's where stuff starts to get complicated.

Sure, you talk to your friends about pretty much everything, but do you talk to them about sex? Almost half of Bustle readers said they try to keep the sex banter to a minimum — 44 percent said they "never" talk about sex with their friends, and 28 percent said they do occasionally, but only when they want advice. "I think it's more common to talk less [about sex] with our friends these days," Amy Levine, sex coach and founder of Ignite Your Pleasure, tells Bustle. "Here's why: We may not be sexually satisfied and if so, we don't want our friends to know what's really happening behind closed doors. Or, it could be that you want to keep your sex life with your partner private, rather than make your friends privy to intimate details."

But, even though 21 percent of women surveyed said they talk about sex with their friends "all the time," there are still certain topics that are completely off limits for some people.

Of course, that could be because chatting with your friends about the ins and outs of sex may lead to some actually solid advice. "The benefit of talking with a friend you trust is to have a source of support and possibly a fresh perspective if things aren't as satisfying as you wish they were," Levine tells Bustle. "Or, maybe you simply want to brag."

When it comes to having a satisfying and fulfilling sex life with your partner, most experts agree it's important to maintain open lines of communication. "[Couples with healthy sex lives] have awkward conversations," sexologist and relationship expert Dr. Nikki Goldstein tells Bustle. "Often people can have sex but are scared to talk about it out of fear that [they] might offend their partner or it might be awkward. In order to have a healthy sex life you need to have sometimes awkward conversations about what might not be working in the bedroom or what you want more or less of."

But while 31 percent of Bustle readers said "no topic is off limits" when it comes to talking to their partners about sex, the majority still have some clear reservations. Twelve percent report they are uncomfortable talking about their sex drive (or lack thereof), especially if it doesn't seem to match up with their partner's. Another 12 percent said they'd prefer not to discuss with their partners how many people they've slept with in the past, and 11 percent refuse to talk about sexual fantasies. Other off-the-table topics that came up (or rather, hardly ever come up)? Experimenting with sex toys with a partner, ability to orgasm, and masturbation.

Let's break that down a little bit, shall we? After all, talking to your partner about what's working for you, what's not working, and what you want to try next, can only improve your sex life in the long-run. These are the subjects that seem to be tripping women up the most — and why.

Using sex toys with a partner can be a game-changer, especially for women who aren't able to get off from just intercourse alone. New research shows that 36 percent of women need additional stimulation in order to reach orgasm, and sex toys can do just that. (Plus, they're fun to have around if you're looking to shake up routine.) And yet, almost half of the women Bustle surveyed said they never use toys with a partner, let alone talk about them. Another 14 percent said they'd like to use toys more often, but they're worried their partners wouldn't be quite so turned on by the idea.

The only way to truly know how your partner feels about bringing toys into the bedroom would be to ask them, but it's still a topic many women are afraid to even bring up. So why are we so freaked out about sex toys?

Women might be nervous talking about sex toys, but they're slightly more open when it comes to discussing their sexual fantasies — at least, they'll talk about it with their partners. While 25 percent of women said this is one thing they would never bring up with friends, 31 percent said they're willing to share their fantasies with their partners, especially if that means being able to experiment. Still, the fear of judgement lingers; 32 percent of women said they don't mind discussing their fantasies, but *only* if they think it's something their partner would be into, too. Another 23 percent would prefer to stay completely mum on the subject... indefinitely.

Sixteen percent of women have refrained from telling their partners their fantasies for fear of being judged, while 10 percent are more worried about flat-out rejection. Eighteen percent said they worry that disclosing a fantasy might make their partner think that their sex life isn't fulfilling enough on its own.

Research shows that regardless of what the fantasy actually is, couples who talk openly about them tend to have happier relationships overall — not to mention way better sex. "Discussing what you want to try is important so your sex life isn't routine, rather fun and pleasurable," Levine tells Bustle.

One thing women aren't afraid to speak up about? Orgasms — and why they're not having them. Nearly half of respondents told Bustle they would rather tell their partners the truth when they can't orgasm. It's a good strategy — talking about what's not working can help you get to the root of the problem, and then try to resolve it. "If you want to have a great sex life, communication is key," Levine says.

As for those who do fake it? Twenty-three percent of respondents said they'll do it sometimes, but try not to make a habit out of it. However, 15 percent said they're "extremely likely" to fake it so that their partners think they're enjoying themselves — and that's not the only reason why.

A full quarter of respondents said the reason they are most likely to fake an orgasm is because they're worried their partners would be "upset or disappointed" if they knew the truth. Additionally, 26 percent said they'll fake it to move things along; real or unreal, orgasms still tend to convey a message of finality, signaling that both parties' jobs are done here.

However, that's not entirely fair. According to a Cosmo survey, only 57 percent of women are regularly able to orgasm, and to assume that orgasms are the end-all be-all of sex discounts the needs of women who aren't able to orgasm easily — if at all. The first step toward closing the orgasm gap is to talk honestly about it.

Talking about sex doesn't have to be awkward, and there are ways to do it that will leave you feeling empowered, not embarrassed. For starters, be honest about what's on your mind. "Unless it's about what you need and want in the moment (a little to the left, harder, faster, I want to...), conversations are best out of bed and to make it a teachable moment," Levine says. Her advice? "Watching a sexy show and sharing a fantasy, or bringing up a more challenging conversation over breakfast" can be exactly what you need to get the discussion flowing. You might not be able to solve everything all at once with a single conversation, but it's definitely a step in the right direction — and hey, at least it will get you in the habit of talking.