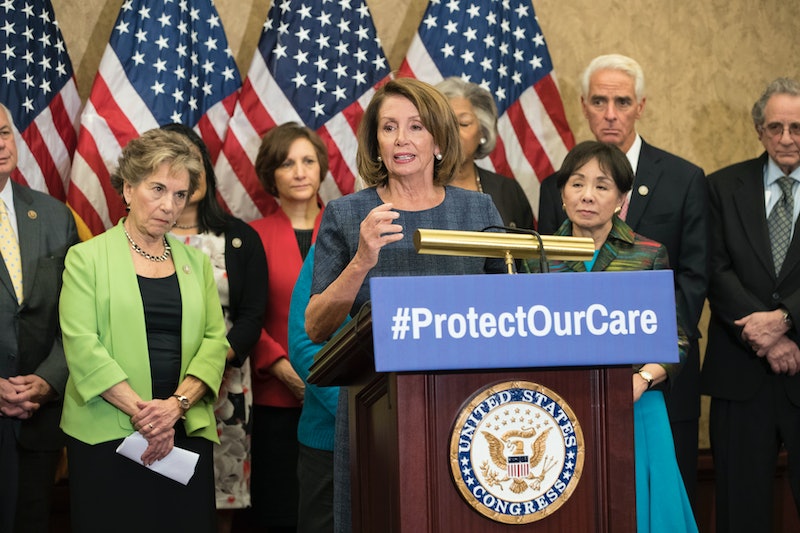 It's important to clarify that Wednesday night's vote did not pass any legislation, but rather, set the groundwork for healthcare legislation that will be voted on in the House on Friday. If passed, this piece of legislation will begin the work of replacing and dismantling the Affordable Care Act.

While there are hardworking Senate Democrats fighting for Obamacare and the ensured continuation of affordable healthcare options, many of the 20 million Americans insured through Obamacare are already expressing their concerns on the trending #SaveACA hashtag. The concerns expressed on the hashtag range from tweets outlining the potential loss of treatment for life-threatening illnesses, as well as widespread concerns about the stripping of preventative healthcare, and regular check-ups.

For those worried, during the Wednesday press conference, President-elect Donald Trump addressed his urgency towards the dismantling of the ACA. "It will be repeal and replace. It will be simultaneously," he said.

In response to both Trump's statements and the vote in Senate, many people have taken to the internet to express their personal concerns about the loss of ACA, and how for many, it could be a matter of life or death. Here are 51 people who want to #SaveACA, and their reasons for that stance:

1. This Woman Worried About Her Grandparents

It's worth noting that both grandparents worked in positions directly supporting their communities.

There is a whole strain of cancer advocacy dedicated to insurance, because of the way most companies treat survivors.

3. This Mother Of A Premature Child

This is coming from the same Senate members who claim to be pro-life.

4. This Woman Who Nearly Died While Uninsured

Unfortunately, it doesn't get better.

5. This Woman With A Pre-existing Condition

Even people currently covered by the workplace are speaking out, because they know the widespread implications.

6. This Woman And Her Family

In many cases, this will not only affect individuals, but their whole social networks.

7. This Woman Calling Out Trump's Silence

The question isn't whether or not Trump supports ACA, it's what his actual replacement plan is.

8. This Woman On Disability

What will happen to the livelihood of all the people about to be kicked off their insurance?

9. This Concerned Mother Of A Cancer Survivor

Again, how is this the beginning of a pro-life administration?

10. This Man Calling Out Republicans

This is worth considering.

There are so many uninsured jobs.

12. This Man Calling Out The Pro-Life Movement

It has already been said, again and again, that repealing Obamacare could be a matter of death for many.

13. This Daughter Of A Cancer Survivor

The ways the ACA has saved and helped cancer patients afford recovery should be at the forefront of the conversation.

Again, the overlap of working jobs that don't provide healthcare and having a pre-existing condition are strong.

15. This Woman Worried About Limited Coverage

Another example of how ACA has improved life quality for many.

16. This Woman Looking For Work

It's really hard to land insurance when you're in the lurch between jobs.

17. This Person Advocating For Kids In Cancer Treatment

It should be noted that he's definitely not as hot as the animated fox Robin Hood.

19. This Father And Husband

Familial concern is a consistent theme.

20. This Woman Correlating Health And Productivity

It's true though, when health declines, so does the ability to contribute to the economy.

21. The Pennsylvania Senator Advocating For His Constituents

The saddest part is that this one is from a month ago and even more relevant now.

22. This Man Concerned About Himself And His Neighbors

Whole communities will be affected.

23. This Woman Ready To Get Married For Health Insurance

Mental health coverage is such a huge issue.

26. This Woman Worried About Job Loss

Not only will people lose coverage, but people working ACA-related jobs will lose employment.

27. This Woman Requesting A Replacement Plan

People wouldn't be as concerned if there was a solid healthcare replacement plan available.

Amen to this sentiment.

29. A Reminder That The GOP Won't Lose Healthcare

It's easier to gut a system you've never been forced to rely on.

30. This Man Concerned About His Nephew

If a better healthcare plan is presented, people will likely get on board.

31. This Woman Threatening To Send Bills To Paul Ryan

This could become a new form of protest.

32. This Father Of An Autistic Son

This hashtag serves as evidence that many parents will be forced between a rock and a hard place if Obamacare is repealed.

33. This Woman Concerned About Her Meds

34. This Man Calling Out Journalists

Perhaps, the wording the question would require reframing. But the point still stands.

35. This Reminder To Call Your Reps

If you are personally feeling concerned, this is a solid form of action.

This applies to many (most) creative demographics.

37. This Woman Concerned About Hefty Premiums

Her previous premium was over twice as much as her ACA payments, and she is not alone.

It would require a whole different thread to delve into student loan debt.

39. This Woman With Chronic Asthma

There are so many people with chronic conditions who will be affected.

40. This Woman Concerned About Her Partner

41. This Woman Going Through Chemo

Where is the replacement?

The lack of affordable healthcare alternatives could also contribute to less innovation in the job market as a result.

Providing accessible healthcare should be a priority for politicians across the board.

44. This Man Concerned About Medication

The effects on mental health coverage are just one of the many possible detriments.

The dismantling of Obamacare could also affect small business owners on a large scale.

46. This Man Concerned About Deductibles

People will need to be moneyed to fight terminal diseases.

48. This Woman With Autoimmune Disorder

The ability to function on a daily basis could be threatened for many.

49. This Man Who Survived Heart Surgery

This thread is full of people who survived because of ACA.

It's crucial to stay loud and not give up.

51. This Woman Concerned About Hospital Funding

Now is a better time than ever to take action and call your representatives to protest the GOP repealing Obamacare, and keep sharing and exchanging stories with people in your community.