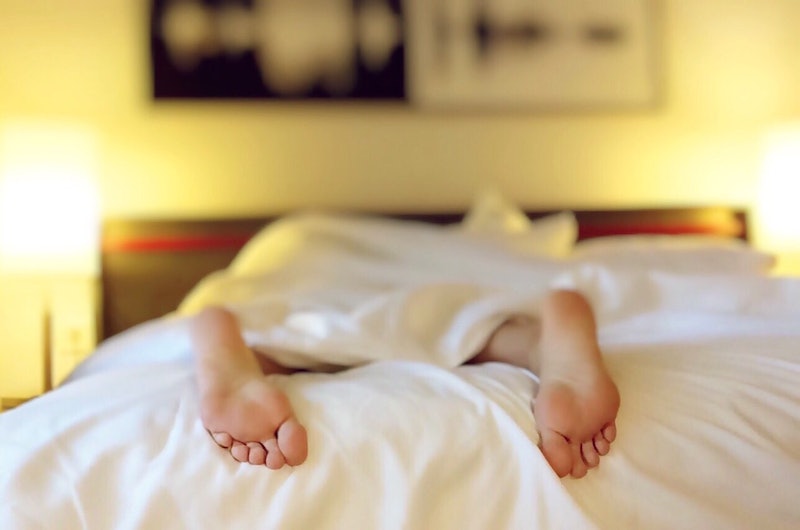 It's pretty obvious that drinking an espresso after dinner might keep you up for hours, but a protein bar after an evening workout? Not as clear. There are actually a few surprising sources of caffeine that could be messing with your sleep, without you even realizing it. And of course, if left unknown, it can mess with your health and well-being over time.

As a certified health coach, I work with people on figuring out which foods and drinks lift them up, giving sustainable energy and balance, and those that aren't tolerated as well. Caffeine seems to be tricky, as some people thrive off of it (not in the evening, typically), and others get too wired, have headaches, or have difficulties falling asleep. And what's more, sometimes this inability to sleep can come from a cup of coffee at 2 p.m. So, if that's bad, think about all those sneaky culprits lurking around that contain caffeine. Even just a little bit might mess with sleep patterns, and what's more, many of these sources actually contain a lot of caffeine, an amount comparable to a standard cup of coffee or a soda. Here are a few sneaky source of caffeine to be wary of.

A bite of chocolate cake at night might taste great, but you could regret it upon hitting the sheets. "Dark chocolate contains about 12 mg of caffeine per ounce, and you’ll find less in milk chocolate and other foods containing chocolate (but it’s still there!)," Allison Sidhu, managing editor of Foodal.com, tells Bustle. "Carob is a nutrient-rich alternative to chocolate that you may enjoy, and it contains no caffeine," Sidhu says.

"No one would suspect that some protein bars have caffeine in them but they do! Most of the time people think they're getting their energy from the protein but in actuality it's really the caffeine giving them that extra boost," says health coach Jenn, known as "NeuroticMommy" to Bustle. "However you'll still have that afternoon, after lunch crash once it wears off. Always check labels and be sure it says caffeine free if you're aiming to steer clear of it," NeuroticMommy says.

"Ice creams that say java or coffee do indeed have caffeine. Most people assume it's just the flavor but it comes with the whole sha-bang," says NeuroticMommy. Same goes for yogurts, so be wary before digging into a coffee flavored yogurt for an afternoon snack.

"Too much caffeine can cause headaches, but many pain relievers that you will find over the counter actually incorporate caffeine to ease the pain. Make sure to follow the instructions for pain relievers since they can have caffeine in them," says Dr. David Greuner of NYC Surgical Associates to Bustle.

Just because you swap a coke for a different type of soda, you'll be surprised to learn that you're still getting quite a bit of caffeine. According to Vanessa Rissetto, a nutritionist, to Bustle, non-cola sodas, like root beer, for instance, has 29 mg of caffeine per can.

Be wary of decaf orders. Decaf coffee should have 5 mg or less caffeine, but many places serve a cup that contains up to 32 mg, says Rissetto. Yikes.

More like this
On TikTok, Tinned Fish Date Night Is The Latest Viral Food Obsession
By Emma Carey
Why TikTok Is Obsessed With Caesar Salads Right Now
By Alexis Morillo
TikTok's Butter Board Might Be The New Cheese Plate
By Emma Carey
Deliveroo Is Selling Lotus Biscoff Cinnabons Now
By Darshita Goyal
Get Even More From Bustle — Sign Up For The Newsletter