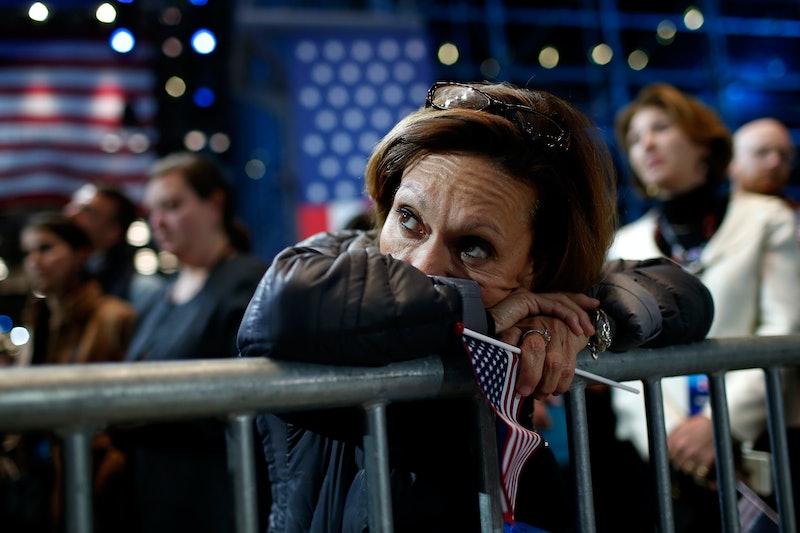 The day many Americans feared would never come has come: Donald Trump's inauguration as the 45th President of the United States. Against all odds, the real estate tycoon has ascended to the presidency, and America may well be entering one of its darker chapters. Then again, maybe it isn't. We won't be able to assess the full impact of Trump's presidency for a long, long time. Until that time comes, here are some little ways to cheer yourself up on Inauguration Day.

Although the United States votes in November, presidents aren't sworn in until January. That leaves an awkward two months or so in which Americans know who their next president will be, but are still governed by the previous one. For those of you who supported Hillary Clinton in the election, that purgatory has been a small blessing — a ten-week grace period in which you could get our bearings, process everything that had just happened, and prepare yourselves for the incoming administration without yet having to feel the effects of it.

It was nice when you had it, but that period is over. Trump is here for real this time. If that's still too much for you to process, you aren't alone, nor are you unjustified — honestly, it's still too much to process. The human brain wasn't built to comprehend things like a Trump presidency in mere days.

If it still feels like the inauguration is too soon, here are some small ways to cheer yourself up, or at least take your mind off of what's happening on Inauguration Day.

1. Plan For The Women's March Instead

The Women's March will be held the day after the inauguration, and it's going to be ginormous. Why not spend Inauguration Day planning for that instead? It will be a great opportunity to vent your frustration against Trump and, more importantly, organize with fellow travelers against him. And if you don't live in Washington D.C., don't worry — there are plenty of state marches you can go to instead.

Although the GOP supported Trump, there are a lot of things they don't agree on. There are already signs of tension between him and Congress on health care, and that almost certainly won't be the last of it. Trump may not be able to get all that much done as president, so there's reason to be at least a little hopeful.

The meme industry will suffer quite the loss with Biden leaving the White House. Thankfully, there's still a treasure trove of Biden memes, and they ain't going anywhere.

4. Have Brunch With A Friend

Ignoring politics completely for the day is also an option. If you just don't want to think about Trump for a day, grab a friend or two and have brunch instead. The country may have dealt itself a major setback by electing Trump, but we've still got brunch. They can't take that from us.

Not that you need an excuse. But it's still just as good as it ever was.

Thanks to popular protests, the plan to build a pipeline through the Standing Rock reservation was cancelled. Later, Obama commuted Chelsea Manning's prison sentence, again after longstanding protests. Four states raised the minimum wage on election night. These may seem like small victories, but remembering that there are still victories worth celebrating, and identifying them, will be crucial over the next four (?) years.

Get your friends together and share your worries with one another. You might be surprised by the solutions you come up with.

The inauguration will be upsetting, but it doesn't have to ruin your week. Finding ways to cheer yourself up will help you get through the day — and perhaps the next four years as well.