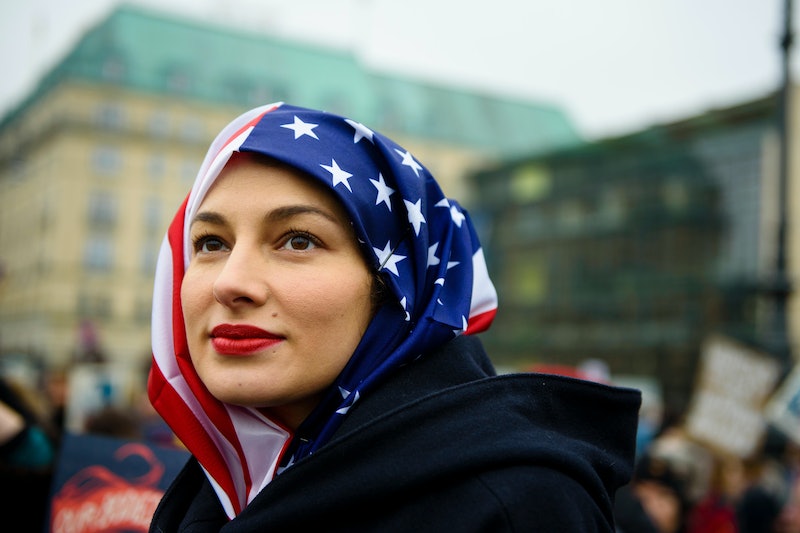 Less than a week has passed since Inauguration Day, and President Donald Trump is making his proposed ban on Muslims coming into the U.S. a reality. He is expected to sign executive orders banning the entry of refugees to the United States and blocking visas issued to people from seven countries—Syria, Iraq, Iran, Libya, Somalia, Sudan, and Yemen—according to Reuters.

And though his actions are shocking, during his campaign he proposed banning Syrian refugees and foreign Muslims, and creating a database to track Muslims in the U.S. After his election, reports of xenophobic and racist harassment went up throughout the country.

"Big day planned on NATIONAL SECURITY tomorrow," he tweeted on Tuesday. "Among many other things, we will build the wall!" The announcement comes just days after millions of people participated in worldwide Women's Marches, one of the visions of which is "recognizing that our vibrant and diverse communities are the strength of our country." With Trump's administration's priorities clearer than ever, now's a good time to show some support to those who will be battling U.S. islamophobia and anti-Arabism on the front lines. Here are just a few of those organizations fighting for equality.

Muslim Advocates is a legal advocacy organization that helps people learn about their rights and regularly takes on lawsuits challenging anti-Muslim discrimination and hate crimes in the United States. The organization also works to shape policy and legislation affecting the lives of Muslim Americans. In a recent blog post, Muslim Advocates President Farhana Khera reflected on what's in store for the organization's near future:

We know that our work in the next few years will be challenging and will require us to think our strategies anew. But we also know this: we must continue to fight for the soul of our nation. That begins with Americans of all faiths and backgrounds coming together and re-doubling our efforts to reject hate and bigotry in all its forms...Now, more than ever, we must ensure our judiciary plays its role as a vital check on the executive and legislative branches.

Learn more about how to support Muslim Advocates here.

The Muslim Public Affairs Council is a civil rights organization that advocates for Muslim Americans in local communities as well as nationally in Washington, D.C. Learn more about their work here.

The Council on American-Islamic Relations, or CAIR, is one of the most visible Muslim advocacy organization in the U.S. They have chapters in major cities across the country and, in addition to their civic work, they provide resources like pocket guides on legal rights, voter registration drives, and fellowship opportunities for Muslim Americans. Learn more about CAIR and how you can support them here.

Muslims for Progressive Values (MPV) is a religious organization that advocates for civil rights, secular government, and LGBTQI inclusion through media campaigns, marriage services, policy research, and more. Learn more about MPV and find the chapter nearest to you here.

The American-Arab Anti-Discrimination Committee (ADC) was founded in 1980 by Senator James Abourezk, the nation's first Senator of Arab descent. Since then, the organization has worked to fight discrimination against and profiling of Arab Americans, as well as advocate for immigration reform and the rights of people caught in U.S. prisons and immigration detention centers. As their recent tweets show, they don't intend to let Trump off without a fight. Learn more about ADC here.

The Islamic Networks Group (ING) is a nonprofit committed to spreading awareness and understanding of Islam through speakers bureaus, seminars and youth programs. Their work addresses the widespread misinformation that fuels islamophobia and attempts to stop it at organizational and institutional levels. Learn more about ING here.

The Muslim Legal Fund of America (MLFA) provides financial support for legal work defending Muslim Americans from discrimination and other forms of injustice through their associated nonprofit Constitutional Law Center for Muslims in America. Learn more about MLFA here.

Also, look into organizations working to protect the rights of Muslims in your local community and see what kind of support serves them best, whether it be donating or volunteering. There are organizations that have been fighting islamophobia and xenophobia in the U.S. since before Trump ever even thought of running for president, and they will continue after his presidency is over. If you haven't yet, it's time to show up for them.