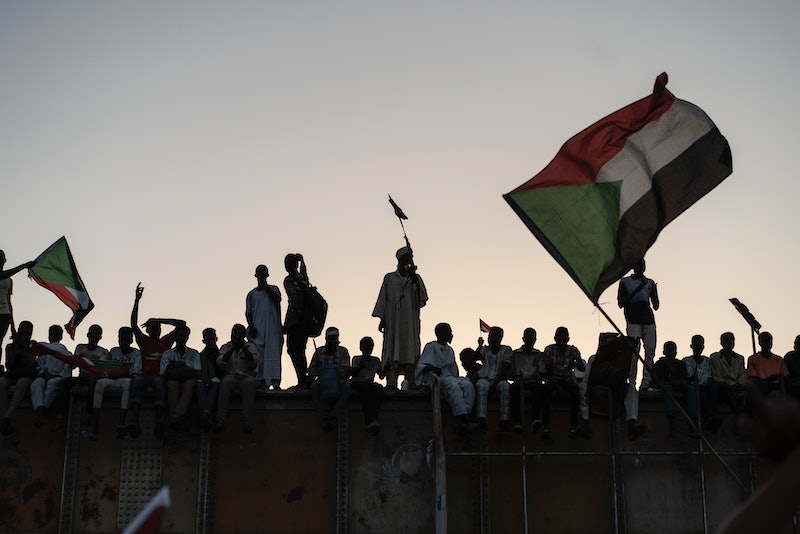 Social media profiles from Khartoum to New York City and beyond have gone blue to show solidarity with protestors killed in Sudan. The hashtag #BlueforSudan has proliferated after Mohammed Hashim Mattar, a 26-year-old democracy advocate, was killed by security forces last week, according to The Guardian. But there's more that you can do than just update your social media. Below are organizations working in Sudan to donate to during the ongoing tension following Democracy protests and subsequent violent military crackdown.

The #BlueforSudan movement grew beyond just Mattar's death. Mattar's friend explained how the movement grew to draw attention to all the deaths. "It’s his favorite color and it was his display picture on all his social media accounts. Then it started being for all martyrs," a friend told The Telegraph.

In total, a local doctor's group — tied to the protest movement — estimates that 112 people have been confirmed dead. The group, the Sudanese Doctors’ Committee, says another 40 people were found in the Nile River after a massacre at the tents of democracy protesters.

The survivors in Khartoum are also suffering. After the killings, the capital went on a collective strike, according to The Guardian, but it only lasted two days because citizens were suffering as a result and talks were promised, Reuters reported. Reports also suggest the same military force that killed the protesters is now patrolling the streets, even as Euronews reports that the ex-president Omar al-Bashir is being charged with corruption.

Even in these circumstances, there are organizations on the ground that you can donate to in order to help the people of Sudan.

More like this
6 Organizations Fighting Police Brutality That You Can Support Right Now
By Syeda Khaula Saad and JR Thorpe
How To Help Those Affected By The Turkey-Syria Earthquake
By El Hunt
Eurovision Has Been Given A Whole New Look Ahead Of Its Liverpool Debut
By Bustle UK
8 Charities To Donate To During Black History Month
By Alexis Morillo
Get Even More From Bustle — Sign Up For The Newsletter
From hair trends to relationship advice, our daily newsletter has everything you need to sound like a person who’s on TikTok, even if you aren’t.