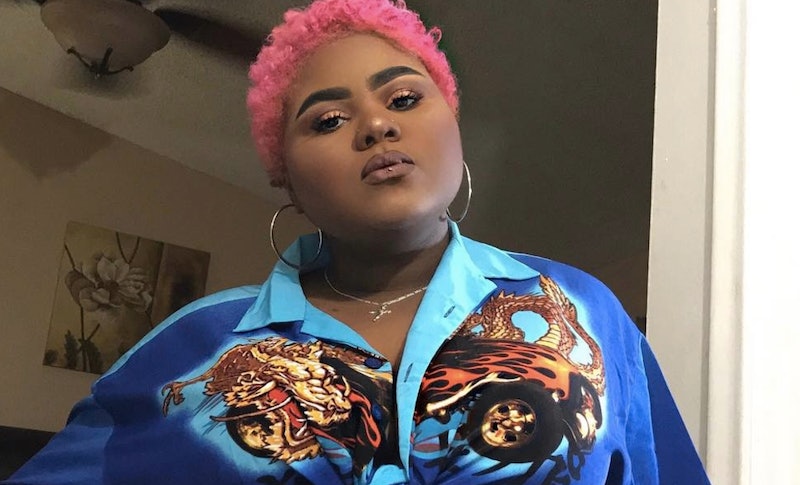 Hyper-femininity is a recurring theme within the wardrobes of many plus size women. Often, the babes in question genuinely prefer classically feminine wears (which is totally cool, of course). But for others, the sheer lack of masculine and androgynous plus size styles out there are a contributing factor to their girly-girl-friendly 'drobes, too.

Along with this void in the market unfortunately comes the notion that performing femininity via pinup dresses, red lipstick, or kitten heels is one quintessential way of "compensating" for one's fatness. Like, "I'm sorry I take up so much space, but look at how 'womanly' I am otherwise."

It takes a certain kind of boldness to rock masculine and androgynous threads when you're living in an already noticeable, already belittled body. Doing so is essentially adding to the list of reasons you stand out — and, subsequently, to the list of reasons other folks might signal you out on the pavement or via social media alike.

Nonetheless, these seven plus size angels persevere, regularly eschewing soft pastels and tulle skirts in exchange for hard blazers, boyish hats, or dapper waistcoats. Constructs surrounding what plus size women and femmes are "supposed" to wear are as far from their radars as they could be. For the below reasons and more, it's the masculine and androgynous looks that most empower them.

Once blogger, writer, and stylist Lydia Okello realized that self-expression is not a phenomenon reserved only for thin humans, she felt a lot freer to experiment with her wardrobe. "I used to think [masculine and androgynous style] wasn't for me," she tells Bustle. "I held the notion that only thin folks got to express themselves in that way for a very long time, and then I finally said 'f*ck it.' I can look just as cool and badass in something more 'androgynous.'"

Although finding these looks in her size might be more difficult than finding them in the straight size market, Okello doesn't give up. Fulfilled self-expression is worth any potential hassle.

For art historian and self-identified "femme dandy" Shannon of Rare Device, androgyny "means thinking about the gendered connotations of all the different things we do and put on our bodies, and finding joy and expression in playing with them in unexpected juxtapositions."

"I identify my style as 'femme dandy' because I'm interested in the historical lineages of both of those identities as heightened, deliberate performances of gender and as part of a queer history," Shannon tells Bustle. "Femme dandy also really encompasses the way I like to incorporate tailoring, texture, and pattern-mixing, an abundance of detail that feels true to the way I experience my fat body as full and abundant, too."

By experimenting with androgynous styles, Shannon not only plays with gender and queerness in ways that might still be considered "unexpected" for plus size women and femmes, but she creates a kind of metaphor for her perception of her body. "Full," "abundant," and certainly not something to hide.

Plus size style guru Stacey Louidor of Hantise de L'oubli recently cut off all her hair. "Part of the reason why I chose to do so was to play up my looks," she tells Bustle. "I've always been inspired by menswear. I would see androgynous people on Instagram and be truly captivated."

As a plus size babe, however, the pressure to perform as traditionally ladylike as possible used to hold her back. "I always felt that as a fat woman, I have to be hyper-feminine to be considered 'attractive' and 'put together.' It's what was expected of me," she adds. "I am naturally feminine, but that in no way stops me from incorporating more masc items into my wardrobe. It actually emboldens me."

"Blurring the lines of gendered structures" and experimenting with all facets of style is one way Louidor breaks the rules. It's one way she reminds herself, and perhaps others watching, that there's no reason she shouldn't keep hitting up the men's sections of stores for shirts and pants. It's a small act that brings her joy. It's also a small act that would likely go unnoticed if executed by someone physically smaller than her.

Julia McCrossin, the blogger behind Massculine Fatshion, has always preferred a masculine aesthetic. However, she tells Bustle, "It took me a long time to realize that I could wear men's clothing and adopt a masculine style while still identifying as a woman, yet keeping the aspects of a feminine aesthetic that I adore, especially jewelry."

Too often, gender identities are placed into sartorial boxes. Women are meant to wear this, while men are meant to wear that. For McCrossin, it was "discovering that I could find clothing in my size, and even at thrift store prices, [that] allowed me to focus on details and accouterments that turned the daily shirt and pants routine into an outfit," she adds. "Wearing the things I dreamed about growing up, and seeing that masculine image as my own, has been one of the most liberating things I've ever done."

Plus size fashion and lifestyle blogger Natalie of A Wheelbarrow Full Of Style doesn't limit herself to traditionally feminine, masculine, or androgynous wears. Instead, she plays around with everything, because why the hell shouldn't she?

"It was a little over a year ago that I started experimenting more with different styles, one of those being an androgynous look," she tells Bustle. "[Masculine] shirts [and] oversized coats have slowly made more of an appearance. I love how these pieces can also be used with other items in my wardrobe to create entirely different looks.''

Plus size fashion blogger and #AlternativeCurves founder Margot Meanie tells Bustle that she's never felt quite at home in her feminine body. "When I was young, I dreamed of having a flat chest," she adds. "My sister would poke fun at me saying that I probably really wanted boobs like Dolly Parton's."

After puberty, her chest "ballooned" even further. "I became ashamed of my body and how it could betray me," Meanie notes. "I often felt forced into feminine fashion because my body was SO ULTRA FEMININE. I think finding a way to deviate from that and dress androgynously, even with a large chest, has been tremendously rewarding to finally be the not-so-girly-girl I always wanted to be."

Photographer and writer Suma Jane Dark identifies as a "hard femme," so she loves to play up her hair and makeup alongside silhouettes that are more traditionally masculine. Besides the aspect of play, however, she notes that menswear (much like minimalist or androgynous styles) is often more, well, practical than womenswear.

"I have a lot of feelings about how gender impacts clothing," Dark tells Bustle. "Particularly that more androgynous/masc styles are often more comfortable, usually have cuts that [are] a bit less focused on 'hiding' my body, and more focused on just being solid — like a really good, basic T-shirt, instead of something with bizarre hems and fabric details that feel honestly body negative a lot of the time."

She personally shops ASOS' menswear line frequently ("they even have pieces in lace"). Comfort shouldn't be reserved for cis dudes, after all. Rocking androgynous and masculine wears as a hard femme is one way of reclaiming a slouchy yet luxurious vibe.

Regardless of whether their motivations are personal, political, or practical, what these seven babes have in common is the desire to see more openness and experimentation within plus size fashion.