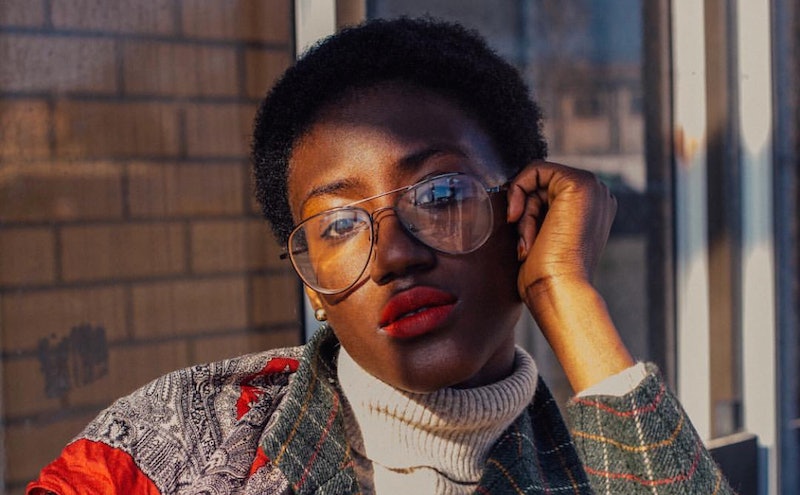 I hate the phrase, “it’s just hair.” Though hair alone can’t magically turn the U.S. Congress into a feminist dreamland or help me understand WTF mining for bitcoin is, it can be a key form of self-expression and self-empowerment — especially, I've found, in the queer community. To highlight this, I spoke with seven queer folks on their haircuts and how they've evolved since coming out. Whether buzzed, locked, braided, dyed, or au naturel, everyone who participated in the story would agree that no, it's not just hair.

I came out as queer about a year and-a-half ago and, despite being a relative newbie in this space, have already gone through some pretty dramatic hair transformations. While there's obviously no rainbow rulebook requirement that you have to immediately morph your hair to say, "Hi, I'm not straight," getting a close-cropped pixie felt right and true when I first started openly dating all over the spectrum.

Short hair helped me become more automatically read as queer, which was so validating for my identity early on (and also shoved the reality of straight passing privilege in my face). I've since dyed it platinum, back to brown, and am currently rocking a bob that feels just femme enough for me.

Being an out and active part of this community has brought some of the most amazing queer, trans, and gender non-conforming humans into my life. From IRL besties to new internet friends courtesy of Tinder and IG, I feel indescribably lucky to share their hair journeys with you.

Here's what seven queer folks have to say about the importance of their hairstyles.

I’ve since kept my hair on the alternative side using it as an expression of self and queerness, [and am] currently wearing a full-throttle mullet. I continue to bounce between teenage skater beeb and super femme business babe, and my hair makes shifting on that spectrum fluid.

I’m so damn charmed to have a hair space and a community that fosters the idea of queer visibility. Hair is so important. Queers are so important. I get to spend my days with both."

"My queer identity informs my hair in that it allows for a lot of fluidity and exploration. In 2012, I began experimenting and went from permed, straight hair (something I'd never really identified with, but was pressured to maintain) to locks dyed seven different colors. I felt like a mermaid and was expressing my freedom!

In 2016, I decided to cut all my locks away and now have an afro that's most 'me' for the moment. There are days where I pick it out to a full-blown feminine fro, and other times I add water so it can be lowered and shaped into something very masculine.

My hair is a representation of exactly how I am feeling at this time in my life and changes often — I don't wear it a certain way because I'm queer or African American or whatever society wants to box me in."

"It was 2011. I had just moved to Los Angeles and at 22, was rocking’ the same Tina Fey shoulder length haircut for nearly eight years. I [didn't consider cutting it] until a co-worker of mine saw me with it pulled back, stopped in her tracks and shouted, 'Did you cut your hair!? I love it.' The [encounter left] me wondering, maybe I should cut my hair short? I just moved to LA and have been hanging out with a lot of lesbians. Why not?! I’m going to do it. And the rest is herstory.

With every edgy new haircut came new confidence in my clothes and personality. Something about an alternative lifestyle hair cut makes you feel unique and different, strong and brave.

Our hair is a wonderful expression and symbolism for growth and change. I’m proud that I am different, unique, spunky, outgoing, and a little unpredictable— which is exactly how I see my ever-changing hair today."

"I [shaved] my head when I came out [as gender queer] at 22. I noticed changing my hair [also changed] the way I dressed. Things got much more simple. Instead of needing large statement pieces, I chose subtly cut articles that spoke a language more easily read by queer folks.

As I am settling into a solid decade of queer life, I've had simple variations of the same haircut for the last 5 years or so: very short with a slick of slightly longer hair curving from one corner of my head to the other. What's funny is that it totally puts me in the 'queer visuals' here in California [and] straight cis-men look straight through me but, for whatever reason, I'm hit on left and right by cis-guys if I happen to be in New York.

Through my non-profit, ProjectQ, I'm able to give many queer folks their coming out haircut. It is my absolute favorite part of what I do — a combination of the talent to work with all hair types with a blend of the skill to see queer folks for how they want to be seen. Some that haven't been able to look themselves in the mirror now have a love affair with the person in their reflection.

As the fight for the validity of our lives has come into question, so has the importance of our self care."

"I have red hair. It gets a lot of attention — always has. When I was nine, I cut it all off for the first time... perhaps in a hint of early queerness, but I genuinely wanted to look like Peter Pan. Then, I spent a super awkward year in 5th grade growing it back out. When I was moving through the world as a queer woman in college, I got an undercut at some point — queer flagging, for sure. My senior year, when I was identifying more and more as non-binary and gender queer, I cut it the rest of the way off.

To me, cutting my hair is one of the easiest and most immediate things I can do to signify where I am and how I’m moving through the world. Cutting it off was one of the earliest steps I took when transitioning — and it’s interesting that now that I feel solid in my gender, I sometimes feel like growing it back out again. That said, the day after the 2016 election, I woke up and immediately buzzed all of my hair off. It’s a very validating costume change."

"I don't think I ever really rocked a 'coming out' hair style that would be identifiable as such, because I've always had a pretty solidly femme identity. But I would say that my hair is definitely tied to my identity as a queer femme, particularly as it relates to my other professional life as an academic.

I feel like it is really important to present a strong femme identity when I teach, because I want my femme students to see someone hold a position of intellectual authority present in a way they can relate to.

There are very few high femme women in the academy, for obvious reasons (i.e., institutionalized sexism and misogyny) but I worry the message this sends to young femmes is that they can't become academics or intellectuals, and I use my own presentation as a way to contest and challenge that message."

"Cutting my hair was one event on the long timeline of coming out. I was 18 when I began coming out and 10 years later, in ways, I'm still making the journey. I cut my hair two-and-a-half years ago after thinking about it for half a decade.

In the time I've had my short hair cut, I've also seen my style change [and] now own a more masculine wardrobe. Five years ago, you would find me in a dress at a wedding. Now... not so much.

The shift has been slow, but I feel the haircut opened the doors. My cut and wardrobe make it obvious that I'm queer. They 'out' me all of the time and, most of the time, I'm very content with that.

While I don't have the privilege of passing in a straight world, I do have the luxury of people I'm attracted to and other LGBTQ folks knowing I'm queer by the looks of me. The short hair cut fits me at this time in my life perfectly.

If you, too, are on your own unique hair journey, remember that there are no rules. Whether you feel pulled to reach for dye, scissors, or nothing at all, that's perfect.

More like this
How To Buy Perfume Online & Avoid Buyer’s Regret
By Simedar Jackson
Marianna Hewitt’s Advice For Building A Personal Brand
By Taylor Jean Stephan
The Nail Color To Wear In 2023, According To Astrology
By Devon Abelman
A New Era Of Gentle Retinols Is Here
By Hannah Baxter
Get Even More From Bustle — Sign Up For The Newsletter
From hair trends to relationship advice, our daily newsletter has everything you need to sound like a person who’s on TikTok, even if you aren’t.