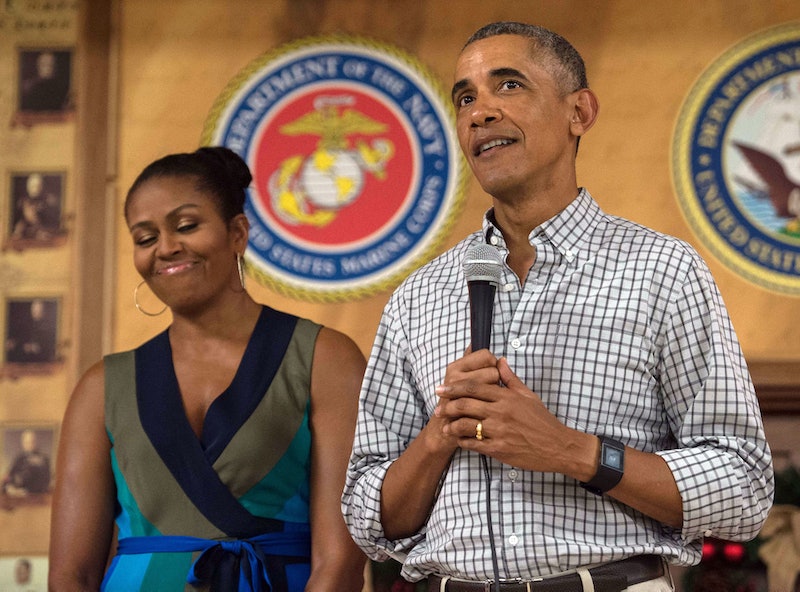 On Jan. 20, America will swear-in President-elect Donald Trump, saying goodbye to the Obamas as First Family. For millions, this transition will mark the end of an era, as the young couple who often seemed to define "suave" and "classy" leaves 1600 Pennsylvania after eight years of defining the presidency. More than just state figureheads, Barack and Michelle Obama were also a model of marriage, often willing to show their emotions (and sometimes, their goofy side), to the world on camera. Their candid moments and youthful vibes will undoubtedly be missed.

One of the most endearing aspects of the Obamas has been their willingness to go off script. Over his two terms in the Oval Office, Barack and Michelle Obama have regularly demonstrated their ability to wing it, to let loose, to joke or dance around, and somehow still steer clear of awkward territory. This is a gift; it is not present in all people, but neither is its enjoyment constrained to the Obamas alone. When they let the cameras capture how much they're enjoying themselves, everyone else can relax and get into the moment, too. So here are seven times the Obamas let down their guard, and let us in on their good times.

They Embraced The Kiss Cam

While Team USA faced off against Brazil in a 2012 pre-Olympic matchup, the infamous kiss cam zoomed in on the president and first lady. Their authentic and giggle-inducing smooch made the crowd go wild.

They Broke It Down To 'Thriller'

Who hasn't tried to replicate Michael Jackson's seminal moves from his hit single "Thriller?" What's best about the resulting 2016 duo dance here is how self-aware the Obamas are, acknowledging with cheeky grins that they can no more respectfully reproduce Jackson than anyone else.

They Also Got Their Groove On With Usher

President and Michelle Obama like to dance, and it seems that Usher has a special talent for getting them moving. In February, he had the whole crowd on their feet, only to repeat the same feat nine months later in November, at BET's Love and Happiness: An Obama Celebration concert.

Sasha and Malia must have had epic bedtime story hours, if the 2016 White House Easter Egg Roll is any indication of the Obamas' ability to tell a good tale. POTUS and FLOTUS brought out the gestures, the voices, and the drama.

Michelle Impersonates Her Husband To Perfection

Even though it was just Michelle Obama who appeared in September on the Late Show with Stephen Colbert, POTUS may as well have been there. That's how spot-on Obama's impression of her husband was, imagining him answering a question from Malia at the dinner table. The couple knows how to joke around with one another.

Every mother will understand the bewildered amusement of FLOTUS when her husband takes a crying baby from her arms, and said baby immediately stops balling. Michelle is both pleased, but also clearly shocked. The move earned President Obama a new name: baby whisperer.

This is the kind of intimate move not often seen in public: sweet, offhand, and indicative of genuine closeness. As the Obamas prepared to meet Chinese President Xi Jinping, FLOTUS made sure Obama's bowtie sat just so.

As the United States prepares to say goodbye to the Obamas, it's comforting to remember all the ways this presidential couple brought joy and love to one another, and to the country. Thank you to both Barack and Michelle Obama, for sharing your true selves with the rest of us.