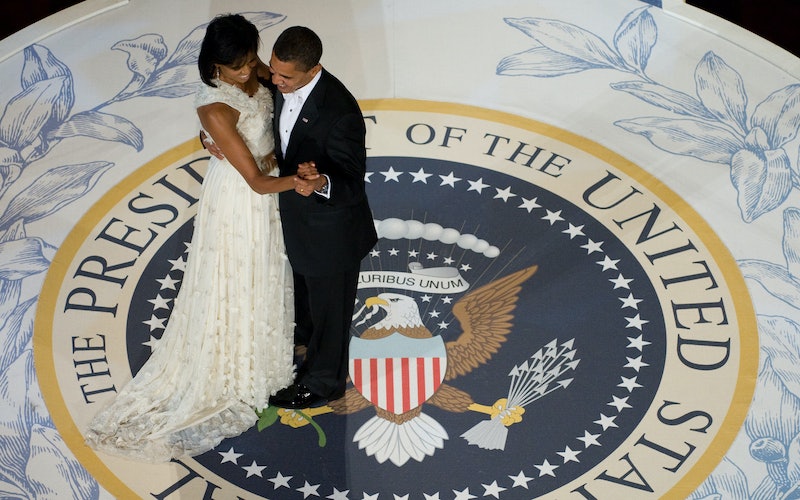 The Obamas' tenure in the White House is almost up, so now is a great time to reflect on the wisdom imparted over the last eight years. America has shone a spotlight on the Obama family for two terms now, and they have risen to the occasion with grace, poise, and charm. They're a true example of an American family who works hard, treats others with respect, and does what they believe is in the best interest of our country. Now is a great time to think about the little ways the Obamas have set a great example.

Whether it was personally or professionally, the Obamas kept their cool throughout the eight exhausting years in the White House, and showed Americans that they could persevere through rough times. Barack and Michelle appeared as a united front to the people, while showing us that their family time with their daughters was highly important in their life as well. They often spoke of family dinner time, and appeared at numerous events with Sasha and Malia in tow.

Besides that, the Obamas have also shown a great interest in furthering the future of our country in any way they know how. From Barack passing health care reform to Michelle encouraging healthy eating and exercise among kids, the pair have championed the health and happiness of Americans first and foremost. Here are just some of the ways you can channel the Obamas' efforts in your everyday life.

Remember That Michelle Wants You To Take The High Road

At the 2016 Democratic National Convention, Michelle delivered possibly her most memorable speech, wherein she said the now-famous line: "When they go low, we go high." It's a crucial point to remember when you're feeling helpless and beat down. In the future administration, there may be times where this seems impossible, but it's essential to keep the faith.

Have The Courage To Shape The Future Like Barack

In 2009, not that long after taking office, Barack spoke of the health care reform we now know as the Affordable Care Act. He spoke of the essential need to reform American care, and concluded his statements by saying, "We did not come to fear the future. We came here to shape it." It was an important statement then, and it's an important statement now that President-elect Donald Trump is set to take the White House.

Don't Forget To Have Fun And Make Some Puns

Each Thanksgiving, it's tradition that the president pardons a turkey. It's a silly custom, but one that under Obama became a charming event each year, and it wasn't complete without some amazing punny dad jokes.

Remember That Dancing Is Good Exercise

Whether Michelle was dancing with Ellen DeGeneres or the Obamas were getting their groove on with Usher, the first family did not shy away from busting a move the last eight years. And it was adorable.

Don't Be So Cynical

Even a president is probably going to get down and feel helpless sometimes. For someone who has experienced their fair share of political races and attacks thrown at them, it's probably easy to feel like everything and everyone is bad and out to get you. And if you give up and succumb to the cynicism, it's even worse. As Barack said during his first run for president in 2008, "Cynicism is a sorry kind of wisdom." He's right, and it's important to persevere instead of listening to the people trying to keep you down.

When Melania Trump appeared at the Republican National Convention and was accused of plagiarizing some of Michelle's 2012 DNC speech (Melania denied these claims), the first lady didn't let it get to her. When Stephen Colbert asked her if she had sympathy for Melania following the incident, all Michelle had to say was "Yeah, that was tough," followed by a smile. She didn't harp on the incident, or publicly chide Melania, which she easily could have done. Instead, she let it go.

Michelle talked to Oprah about being labeled an "angry black woman," saying "That was one of those things where you think 'Dang, you don't even know me.'" Michelle felt the label put on her during Barack's campaign, as well as after they entered the White House. But the First Lady has handled everything thrown at her with grace, even when confronted with racism, and that is truly exemplary.

Remember Your Partner In Life

Even if you're leading the country, your partner is still important. No one showed this more clearly than Barack and Michelle. The two made time to keep their marriage strong even through the presidency. They showed both their daughters and the country what a strong marriage looks like when both partners support each other.

The Obamas have imparted a lot of wisdom to America, and they will be fondly missed as our leaders.