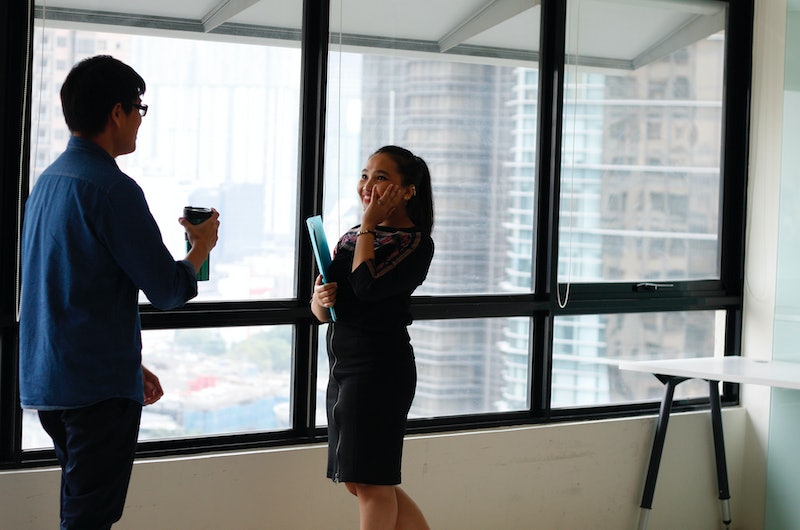 I have a deep horror of the word “networking.” Schmoozing with strangers with the hope of making professional connections is pretty much the definition of hell for me, and yet, I know I should do it. Because the truth is, awkward though it may be, networking does actually pay off. Just ask the millennial women who gave us their networking stories below.

Networking may be difficult and uncomfortable, but it’s one of the best ways to find a job. A 2010 survey of more than 59,000 people found that 41 percent said they’d gotten their jobs through networking — and that networking was a more effective route to a job than any other method, including internet job boards, agencies, and direct approaches to companies. A 2016 survey of a much smaller group (3,000 people) is even more surprising; it found that 85 percent of all jobs are acquired via networking in some form.

Needless to say, in this day and age, networking when you’re on the job hunt isn’t optional. And though the thought of attending a gathering full of strangers armed with business cards and handshakes may make you cringe, there are things you can do to make networking a little easier. “If you're new to networking, I'd recommend just going to as many events as you can,” Jennifer Yeko, rounder and recruiter at Ninjarecruiting, tells Bustle’s Amanda Chatel. “People are generally very friendly at events so just walk in with a smile on your face and look approachable.” Be sure to bring business cards with you, paste on a smile, and don’t stare at your phone the whole time. (Check out more networking tips here.)

Networking takes some practice, but you’ll find that a little effort can reap big rewards. Here are eight millennial women discussing how networking paid off for them.

I got an internship with someone who used to work at ESPN through networking. As someone who wanted to work in sports all through college, I knew this was a huge break! After completing my internship, and six more internships in college, that same person from ESPN started her own business and hired me. I would never have the job I have now if I didn't network for that initial internship.

I attended the Self-Employment in the Arts Conference (a conference for self-employed artists) as a college student and connected with a video production company whose seminar I had really enjoyed. The founder invited me to join him for lunch and after bonding over a love of travel, I made it a point to keep in touch every few months. I was determined to work with his company and after a year of constant contact, he emailed me out of the blue with my first freelance writing assignment! I then went on to help the company produce a short film series and have since found other clients through my work with them.

Networking paid off for me when another blogger that I met at a conference was able to connect me with a brand that I had been wanting to work with for a while. That connection turned into a long-term paid partnership.

My job as an outreach, social media, and fundraising coordinator with a local nonprofit led me to the connections that got me the executive director job. A member of that network was the former executive director of Mental Health America of Kentucky. She singled me out and encouraged me to apply for this position when she was leaving. She'd worked with me at a conference and we chatted about how and what needed to be done in the state at that time. I now run the oldest mental health advocacy organization in Kentucky, at only age 35.

Networking has paid off for me when switching to a new payroll company. If it wasn't for the amazing people I met through my local chamber of commerce I would not have been able to work out a better plan for the business I manage.

I have been running my own business for just over a year now and it’s been a huge and amazing learning experience. I was always scared sh*tless of so-called 'networking' but I started forcing myself to go when I started my business. I think the best thing that I got from networking was learning how to talk about my business quickly and concisely so that our story can be re-told easily, generating word of mouth. From the events I forced myself to go to I now have an amazing group of people around me that I can approach for advice with marketing, accounting, investment, etc. It's not always clear why a person was put in your way at first, but normally it becomes clear at a later date.

I can't think of a time that networking has not worked in my favor, but one of my favorite instances was at a JustFab event in New York. I attended with no real intention but to see in person what the company was about. While I was there, a style expert and I began chatting and by the end of the night I was booked to model on the 'TODAY Show,' which I still do occasionally.

When I first set out on my entrepreneurial journey, the idea of 'networking' scared the crap out of me because I was an extremely shy person. However, with limited resources for my industry (fashion) in the area I live, networking has become everything for me.

One prime example: I was introduced to a sales guy for a local magazine with a very small circulation that was just trying to get off the ground. Many told me don’t waste my time meeting with him; however, I am always game to hear someone out. I met with him and turns out he was college friends with a woman who had since become a well-known and published professor at FIT (Fashion Institute of Technology). He set up the introduction and she has now become a very solid mentor resource for me as I grow my business.

TL;DR: Networking may seem scary, but it's usually well worth the effort. You never know which connections you make now will prove to be valuable down the road later. And if the idea of mingling for an hour makes you nervous, just remember this — Netflix will always be waiting for you when you get home.