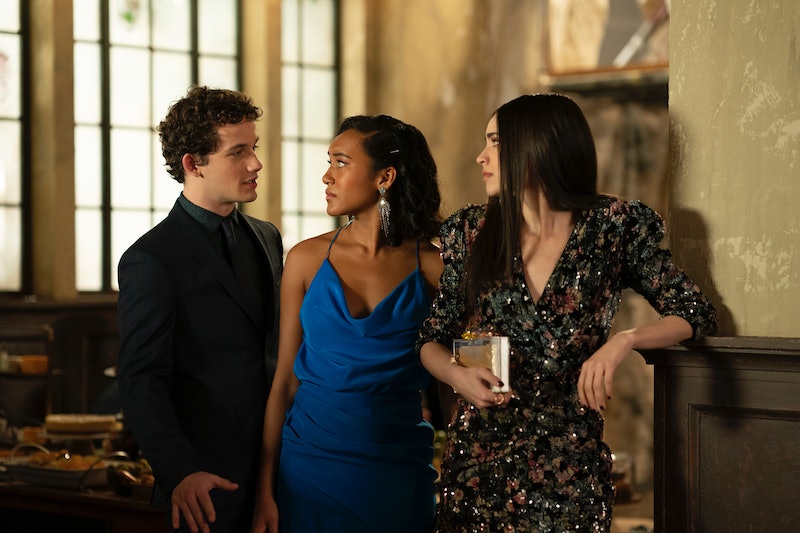 The first season of PLL: The Perfectionists is coming to a close, and in only a dozen or so episodes, it’s shown the same tendencies as its predecessor — hot young people, mysterious British strangers you shouldn’t trust, an omniscient, ever-present watcher, and Mona, continuously surprising everyone around her. There have been some revelations and answers so far, but questions about The Perfectionists Season 1 abound. There’s a lot to handle before we can move onto Season 2.

There’s no word quite yet on Season 2 of The Perfectionists — Freeform has gone so far as to renew favorites like The Bold Type and Siren, but they haven’t made a peep yet about The Perfectionists. So, the Season 1 finale could very well be the finale… forever. The show started with Alison trying to figure out the mystery of Taylor Hotchkiss, a Beacon Heights girl who reportedly died by suicide, and it’s just spun out into something bigger, something more nefarious, with twists and turns and adults that are just way too involved in the lives of the teenagers and young adults around them.

Last we saw of Alison and her group of Perfectionists, we found out that Taylor was actually the creator of Beacon Guard and she was able to pinpoint that Jeremy may have killed her brother. Have we not learned that British guys are not to be trusted? Remember Wren?

Those answers came in a timely fashion, but here are some more questions that need to be addressed into the Season 1 finale and (hopefully) Season 2.

Is Taylor Good Or Evil?

Taylor wants to solve her brother’s murder, and she built Beacon Guard because her father was murdered and she wanted to protect the people she loved. Well, sure. That could be true. Or Taylor could have killed her dad and brother and ran away so it made it look like someone was after her but in reality, she is the murderer. She is the bad person. Never trust a soul on any show by I. Marlene King.

As I said earlier, mysterious British guys are not to be trusted on these sorts of shows. Right now, it seems like Jeremy was the one to throw Nolan from the roof, but all that muttering and exclaiming about his life being over denotes somewhat of a guilty conscience from Jeremy. He doesn’t seem like the cold-blooded killer we’ve seen on other shows. Maybe there was a reason. Maybe it was blackmail. Either way, we need to know.

Can Mona Get Her Job Back?

The Perfectionists is rewriting their take on inappropriate faculty/student relationships in the Pretty Little Liars universe, because Ezra and Aria got married and yet Mason and Mona can’t play chess together. Totally unfair. Mona keeps people at Beacon Heights University safer than anyone knows — bad things will happen without her around.

We know he was murdered, but until we see a body, that doesn't mean he's really gone. The Pretty Little Liars universe is such that even if you do see a dead body, you shouldn’t be convinced that said person is dead. Daddy Hotchkiss is probably alive on an island somewhere hiding from his wife and kids and ready to make a surprise comeback or something.

What Will Happen To Dylan?

Dylan worked so hard to get where he is only to cheat at the last minute by submitting a recording that wasn't his. Sigh. It sounds like he’ll be expelled, but poor Dylan. Hopefully, he'll figure something out.

Will The Show Get Their Investigators Better Outfits?

Dana is a tough former FBI agent, but can we make her outfits cuter? Colors, maybe? Fewer structured blazers? Open to ideas.

Will Jeremy Rat Out The Perfectionists?

They shot him, claimed self-defense, and then figured out that he was alive (oops). Sounds like the Perfectionists should be scared of the story that Jeremy tells when he wakes up and is able to speak to the authorities.

Can Alison Fall In Love Again?

Her divorce with Emily is happening, but Alison deserves to be happy! Let’s find her a new fling. Casual works, too.

Knowing The Perfectionists, some answers will come from the finale — and some questions, too. Hopefully, a Season 2 can handle it all.

More like this
'Grey's Anatomy's New Intern Got Advice From Dr. Bailey Herself
By Grace Wehniainen
'The Rings Of Power' Episode 6 May Reveal Sauron’s Identity
By Grace Wehniainen
Caleb McLaughlin Details Racism From 'Stranger Things' Fans
By Radhika Menon
Glenda Cleveland Died 2 Decades After Trying To Turn In Neighbor Jeffery Dahmer
By Brad Witter
Get Even More From Bustle — Sign Up For The Newsletter