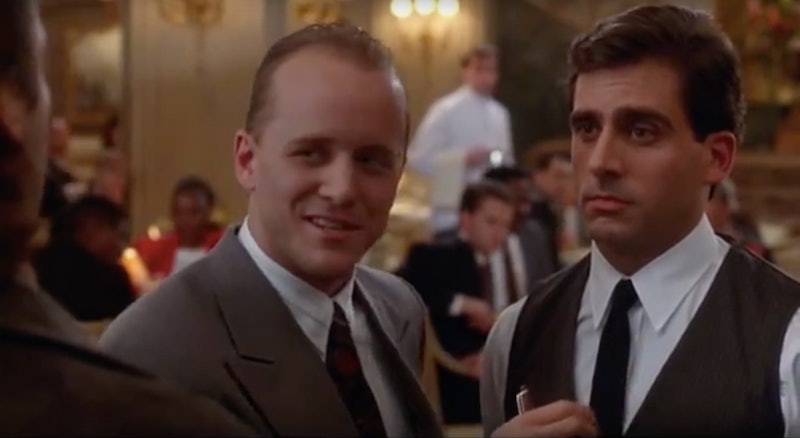 Every major star in Hollywood had to start somewhere. It's a rare actor who stumbles into a lead film or television role right away. If you rewatch some of your favorite 90s movies, you might spot stars with background roles. There are huge names who appeared in small ensemble roles, and some of them might surprise you. Whether it's James Franco and Jessica Alba as part of the nameless popular clique in Never Been Kissed or Milo Ventimiglia cleaning Laney Boggs house in She's All That, these roles prove that it takes hard work to strike it big. While appearing in a major blockbuster is nothing to sneeze at, it might shock you to see leading actors in the background. Often, they don't even have lines.

Every young actor dreams of landing a complex, career-changing role, but when just starting out in the industry, people are more likely to take any work they can to pay the rent. There are few out there who didn't start small, and if they're lucky, these small appearances don't get edited out entirely. Chris Messina and Adam Pally of The Mindy Project, for example, were both edited out of the first films they were ever cast in. The stars who did make the cut have hilarious audition stories to prove their careers haven't always been filled with Oscar-making moments. It can be kind of comforting to revisit the early careers of major stars and realize that, like many successful artists, they started out by just doing the work.

Here are some of stars who got their start in your favorite 90s movies.

In the days before Rory Gilmore, Alexis Bledel played another studious character. That was an unnamed boarding school attendee in Wes Anderson's Rushmore. In this nonspeaking role, Bledel sat next to Jason Schwartzman and looked ready to learn. It's not clear how she ended up in this indie film and she's never spoken on the matter, so one can only assume that she accidentally wandered off the Gilmore Girls set and sat in on this lecture by mistake.

Jason Segel's path to fame was unconventional, and he appeared in several small roles before he got his big break in Judd Apatow's Freaks and Geeks. The star showed up in the 1999 teen rom-com Can't Hardly Wait, where he played a major stoner talking about Velma from Scooby Doo. Since then, Segel starred in the sitcom How I Met Your mother, was the writer and star of his own film Forgetting Sarah Marshall, and gave a career-changing performance as David Foster Wallace in The End of the Tour.

James Franco and Jessica Alba have very different, but equally successful, acting careers. Franco has become a bizarre cultural icon, and his roles, from Allen Ginsberg to Tommy Wiseau, have reflected this. Jessica Alba became a well known actress, and businessperson, has starred in and produced major blockbusters. In 1999, these two were both just nameless members of South Glen High School's popular clique in Never Been Kissed.

Milo Ventimiglia in She's All That

The past couple years have been a true Milo Ventimigliassance. While his roles as Jess in Gilmore Girls and Peter Petrelli in Heroes were career-defining moments, this star dropped off the map for a moment. However, he's made a strong return in This is Us, where he stars Jack Pearson, otherwise known as America's No. 1 hot dad. In 1999 however, he too played a nameless popular. In one scene, Milo Ventimiglia shows up at Laney Bogg's door to clean her house.

Kristen Stewart in The Thirteenth Year

K-Stew has been in the business for a long time, and in 1999 she was a background extra in the Disney Channel original movie The Thirteenth Year. The actress shows up standing in line for the water fountain for a brief second. She was 9-years old, and nobody could have guessed that she would go on to lead the Twilight franchise and become an indie-movie sensation in her own right.

Okay, this might be cheating a bit since Amy Adams role in Drop Dead Gorgeous is pretty iconic. It was a small part, though, and the role of Leslie Miller was her film debut. The satirical movie about beauty pageants is a long way from Oscar-contending dramas that she is most well known for, but the role got her noticed by critics and lead to future comedy casting. Who could forget her time selling purses on The Office?

Ryan Reynolds in Sabrina the Teenage Witch: The Movie

Ryan Reynolds is one of the biggest stars of this era; he's been the lead in some of huge blockbusters, from superhero movies to romantic comedies. In 1996, he was wronging Sabrina the teenage witch in the show's first TV movie. It's clear from the start that Reynold's character is trouble, because his name is Seth and his tips are frosted.

Side note: Reynold's questionable hair choices aside, the fashion moments in this movie are the real star.

Renee Zellweger in Dazed and Confused

Richard Linklater's cult classic Dazed and Confused launched the careers of many stars including Matthew McConaughey, Parker Posey, and Ben Affleck. While these actors had major roles, Renee Zellweger can be spotted only in the background. She hazes underclassman and guzzles beer at an outdoor party, but doesn't have any lines of her own. She reportedly auditioned for a bigger part, but was only given ensemble. This didn't stop the Bridget Jones Diary star from becoming a major name in Hollywood.

Lots of actors in Hollywood wait tables to pay the bills, but Steve Carrell plays a waiter in John Hughes' 1991 dramedy Curly Sue. His character had a name, Tesio, but no lines. In 2017, he's not just well-known Michael Scott from The Office, one of the greatest comedic roles in television history, but is also an Oscar-nominated film actor.

It's crazy to see some of this decade's biggest stars getting their start in the background of 90s movies. Everyone on this list has continued on to a successful career, whether that means Oscar or Emmy awards, starring in major blockbusters, or becoming a cultural icon. Even so, before getting famous, most of these stars got their start taking roles that didn't even have lines. It's an important reminder even some of the most talented actors in Hollywood had to pay dues.