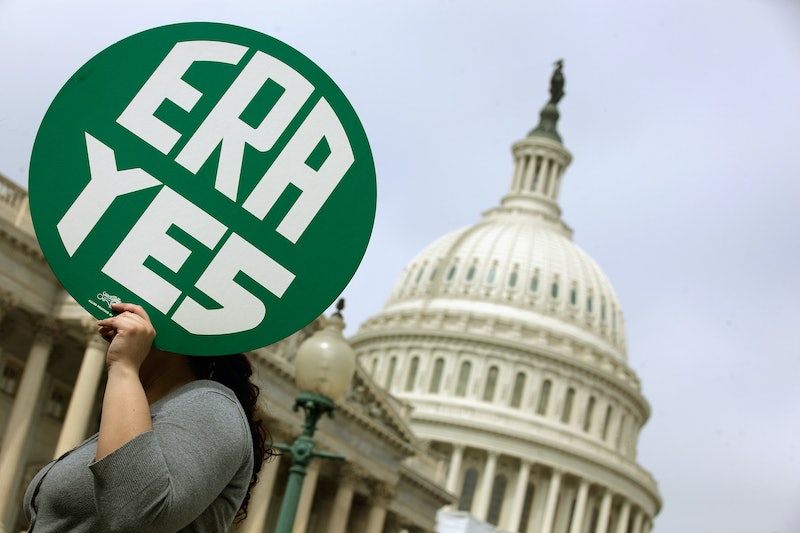 On Tuesday, the House Judiciary Committee held a hearing to discuss the Equal Rights Amendment, which aims to confirm something you probably thought was already established: the legal equality between men and women. Actresses and politicians alike appeared before the committee to point out just how unbelievable it is that this conversation is still taking place, centuries after the Constitution was first written. The Equal Rights Amendment hearing quotes from these activists serve as a critical reminder that, shockingly, women still don't have equal protection under the law in 2019.

The Equal Rights Amendment, also known as the ERA, was first proposed in 1923, but it didn't officially pass into law until 1972. Unfortunately, the bill was never ratified because it didn't receive the support of at least 38 states at the time. Ratification is a required process for any proposed change or amendment to the Constitution; at least 75% of states have to approve the change within a certain amount of time, otherwise the change is rendered inactive. That initial deadline passed in 1978.

Lawmakers face some central challenges in the push to ratify the ERA, once and for all. First, the House will have to pass H.J. Res. 35, which would restart the ratification process. Second, lawmakers will likely have to deal with a number of legal battles opponents might raise, including issues related to the ratification deadline, the impact of Supreme Court precedent through the years, and more. It's worth noting that there are pair of resolutions already introduced in the House and Senate — called H.J. Res 38 and S.J. Res. 6, respectively — that aim to remove the ratification deadline and renew consideration of the ERA.

According to CBS News, Rep. Carolyn Maloney introduced H.J. Res 35 in January. On Tuesday, Maloney said that the ERA Hearing, which was the first of its kind in 36 years, is proof of the power of a Democratic majority in Congress. Per CBS News, she said:

This hearing is long overdue. It's an example of what a Democratic majority in Congress means today. We have an extraordinary responsibility and opportunity to seize this moment.

Though Maloney is the sponsor of the ERA legislation in the House, there's sponsorship for a similar effort in the Senate, as well: Sen. Bob Menendez introduced S.J. Res. 15 on March 27. The resolution has the same goal of restarting the ratification process for the amendment.

Here are some of the key quotes from the ERA hearing that highlight why the government needs to ratify the amendment: