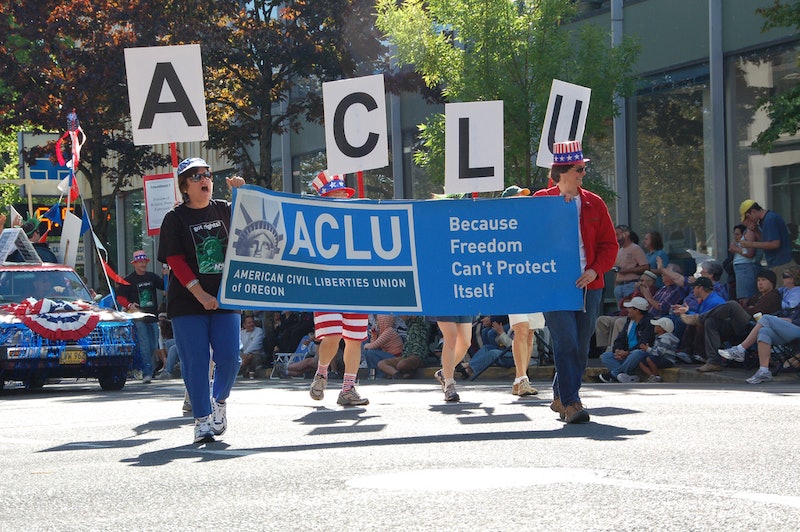 If the last few weeks have proven anything, it's that organized protests have power. This past weekend alone, the American Civil Liberties Union received $24 million in online donations. But while the ACLU has gotten major attention for good reason, there are numerous other organizations like the ACLU to donate to, too — and all of them will be essential in continuing to resist the questionable policies Donald Trump's administration has and will implement.

Shortly after Trump imposed a temporary immigration ban on seven countries that are comprised mainly of Muslims, the ACLU filed a lawsuit that led to a temporary stay, keeping several people from being deported from United States airports. (Thank goodness for judicial independence.) While the Department of Homeland Security released a statement in response saying that "President Trump's Executive Orders remain in place — prohibited travel will remain prohibited, and the U.S. government retains its right to revoke visas at any time if required for national security or public safety," as well as that it will "continue to enforce all of President Trump's Executive Orders in a manner that ensures the safety and security of the American people," the fact that the stay was granted was a huge win. (The DHS later clarified in a tweet on Sunday night, "We are & will remain in compliance with judicial orders. We are & will continue to enforce @POTUS's EO humanely and with professionalism.")

Trump's executive order temporarily bans all refugees from entering the United States for 120 days, places a general ban on all other people entering the country from those seven countries for 90 days, and bans Syrian refugees indefinitely to supposedly reduce the chances of a terrorist attack. And yet, none of the terrorists who attacked the World Trade Center on Sept. 11, 2001 came from any of the countries that he imposed the ban on — that's Iraq, Syria, Iran, Sudan, Libya, Somalia and Yemen. Trump also allegedly has business interests in the countries those terrorists did come from. When you think about what went into the selection process for signing that executive order, that's extremely alarming.

For several long hours after Trump's executive order, thousands of people protested outside of major city airports like John F. Kennedy International Airport in New York City, as well as in parks and other public spaces. But the American people have been protesting Trump's presidency ever since he stepped into the White House. Protests have come in the form of Women's Marches around the world, boycotts against Trump's inauguration, and donations to groups like Planned Parenthood and the ACLU.

Notably, this weekend's total donations to the ACLU are six times what the organization normally receives on average in a single year, according to the Washington Post. More than 356,000 people made contributions in an effort to continue supporting the lawyers at the ACLU who not only successfully argued against Trump's executive order, but constantly defends people's civil and human rights on a daily basis.

Now that the ACLU is at the forefront of the resistance movement against Trump's policies, it's important to support other organizations with similar missions. Here are nine groups that could use some green from your piggy bank: