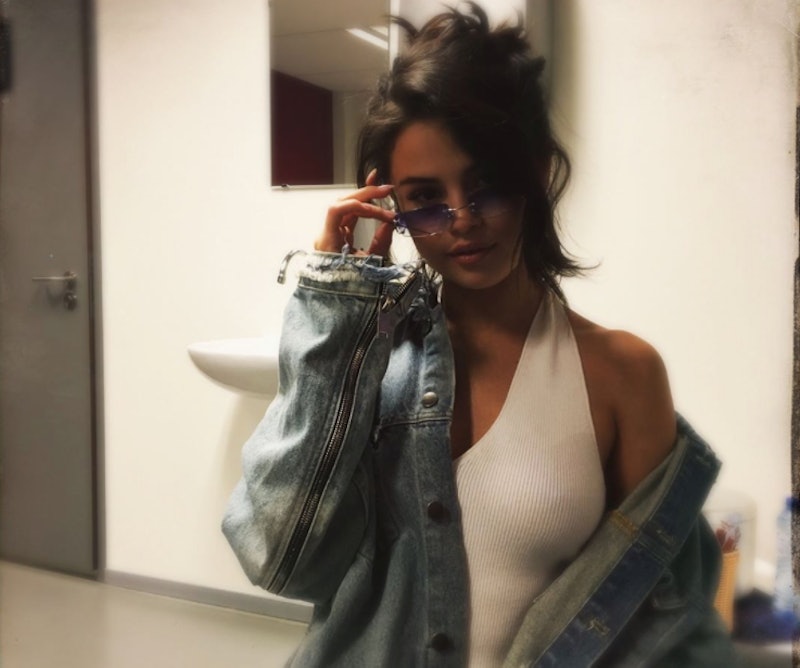 It seems as though the days of oversized bug-eye sunglasses are behind us. Just scroll through Instagram and you'll begin to notice a trend — celebs are rocking smaller, '90s-inspired sunglasses, instead of the large shades of years past.

This isn't exactly surprising to me considering almost every trend from the '90s has made a triumphant return to the fashion zeitgeist over the last few years. There are three basic characteristics that define this new wave of '90s-inspired sunglasses: They're small, they frequently feature colored lenses and they often have thick frames.

Perhaps one of the biggest proponents of the sunglasses trend is Selena Gomez, who has rocked several '90s-inspired sunnies for a variety of occasions. She's rocked an oval pair with red lenses, a slightly rectangular pair with ombre purple lenses, and a small black oval pair. Gomez is the queen of '90s sunnies.

She rocks these sunglasses like no other, convincing me that I need a small pair of sunglasses as well.

I'm actually pretty sure I had these exact sunglasses in seventh grade.

If only I knew these sunglasses were going to make a comeback, I would've saved mine. But we're in luck, because throwback '90s sunnies are popping up in all of your favorite stores, so you can get a pair (or three) for yourself just in time for summer.

1. This Simple Pair From Forever 21

2. These Oval Sunnies From Urban Outfitters

Give off serious Selena Gomez vibes in these red tinted shades.

These cat eye sunglasses are the perfect mix of modern and retro.

I would like the record to show that I am officially obsessed with these pink tinted sunglasses. So cute.

These check off all of the '90s boxes.

Doesn't get much more retro than this.

More like this
Serena Williams Looked Like Royalty In A Bodycon Velvet Dress
By Allie Fasanella
Genius T.J.Maxx Shopping Hacks For Sales On (Almost) Everything
By Kelsey Stiegman
10 Corsets That *Actually* Work For Big Boobs
By Bella Gerard
Androgynous Formal Wear That Will Make You Feel *So* Fancy
By Megan Lasher
Get Even More From Bustle — Sign Up For The Newsletter