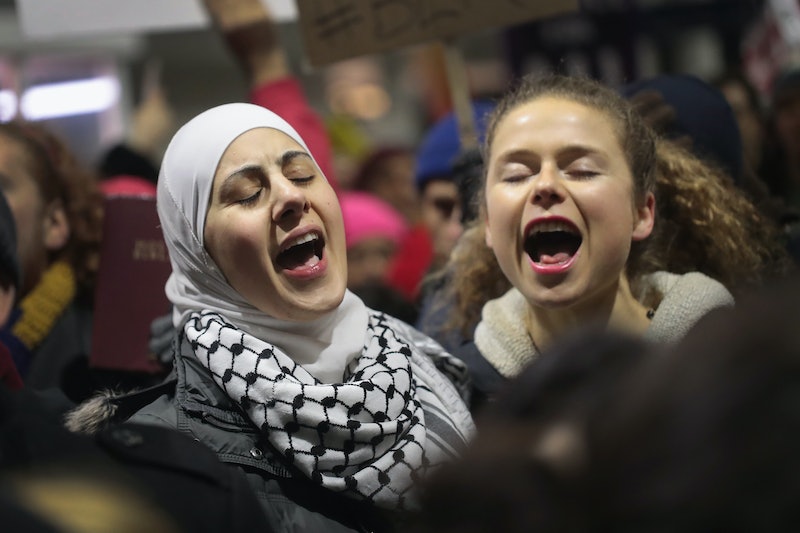 President Donald Trump's ban on refugees and immigrants struck a chord with the American public over the weekend. On Saturday, protests sprang up at airports nationwide, and on Sunday they spread to city centers, with more politicians joining in condemning the moves. If you want to make your voice heard — even if you weren't able to attend a protest — consider signing these nine petitions to oppose the immigration and refugee bans.

The brutal order shocked many. Any and all travelers from seven majority-Muslim countries were at first included in the order. That included permanent residents whose homes, jobs, and lives are based in the United States. Now an exception has been made for these green card holders after the ACLU won an emergency stay of the order, but the White House has insisted they will face increased scrutiny at the borders.

Even with the more limited ban, opposition isn't letting up. New York Sen. Chuck Schumer broke into tears Sunday addressing a crowd on the matter. "These orders go against what America has always been about. The orders make us less humanitarian, less safe, less American,” Schumer said at a press conference. “We’re demanding the president reverse these executive orders that go against what we are, everything we have always stood for."

If you agree, consider singing these nine petitions.

Consider signing this petition on the Muslim ban, as it's addressed directly to Trump himself. He may need to come to his senses on this one.

2) Tell The Supreme Court, Too

Since he may not listen and congressional Republicans aren't opposing this, generally speaking, tell SCOTUS directly. The ACLU has won a stay, but it's just temporary.

3) For Legislation, Paul Ryan Would Be Key

The House GOP would be the main obstacle for legislation overriding the executive order. Let Paul Ryan know how you feel.

4) Those With Visas Shouldn't Be Affected

Green card holders have already been given an exemption. Visa holders should too, and this petition calls on Trump to let them in.

5) We Really Owe The Interpreters

These are people who put their lives on the line for America. They should not be included in the ban either, as this petition points out.

6) Even The Brits Are Pissed

If you're a British citizen or dual national, consider asking Theresa May to condemn the Muslim ban. Another petition to Parliament asks legislators to block Trump from visiting the UK altogether in response.

7) Higher Education Has Skin In The Game

Many of the visa holders from these seven countries are studying here in the United States. This petition is specifically from the country's university communities.

If Trump wants to ban our neighbors from the U.S., why not ban Trump properties from something? This petition calls on Expedia to remove his hotels and resorts.

9) Madame Liberty Would Not Be Pleased

This petition is directed at the National Park Service. It asks that the Statue of Liberty's torch lights be turned off until the ban is repealed. That seems like a fitting recognition of this clear departure from American values.

These petitions are a great start. Now that you've signed all nine (Right? OK, eight if you're not British), take the next step by calling your senators, representative, and the White House. Let them know immigrants are welcome here.