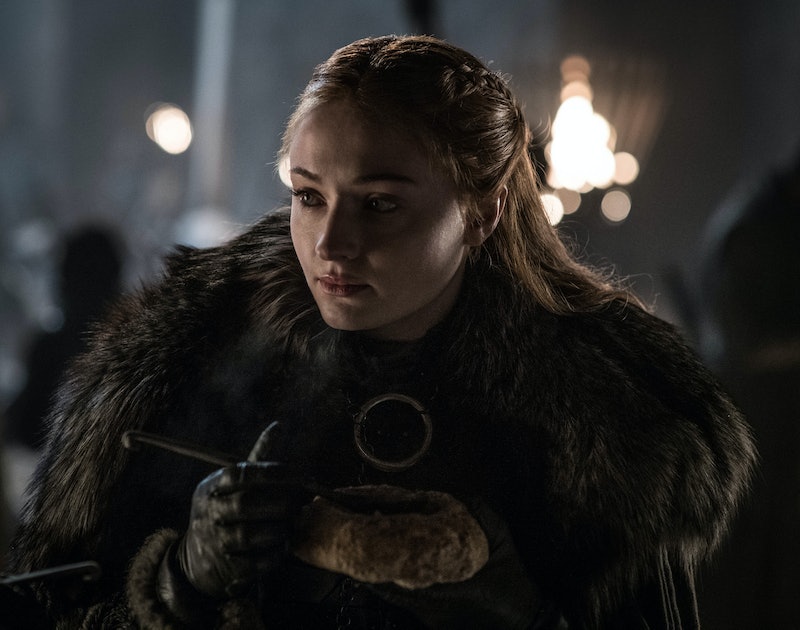 Spoilers ahead for Game of Thrones Season 8. As promised, the death count has been quite high in Game of Thrones Season 8. Let's review, shall we? In five episodes alone, we've lost brave soldiers like Ser Jorah and Lyanna Mormont, Jaime Lannister, Missandei, and The Hound. There have also been some welcome demises, like Euron Greyjoy, Cersei, The Mountain, and Qyburn. But while the numbers are dwindling, all signs point to Sansa surviving Game of Thrones.

The Stark girl has grown considerably in the past eight seasons from a spoiled girl eager to marry Prince Joffrey to a wise, bona fide woman. And while it's unclear whether Jon will take the Iron Throne, Daenerys will succeed, or a third possibility, audiences will know soon enough. However, many fans are hoping not only for Sansa's survival but that she'll become the next ruler of the Seven Kingdoms. After all, she's got a good head on her shoulders, she's from an honorable family, and she likely

With Jon leaving Sansa in charge of Winterfell, the Stark has gotten a chance to shine. And it seems like Sansa is doing a great job. Not only is she practical, but she's not cruel. As Sansa pointed out in Season 8, Episode 1, "When I ensured our stores would last through winter, I didn't account for Dothraki, Unsullied, and two full-grown dragons. What do dragons eat, anyway?" And although it was a jab at Dany, she made a valid point.

Furthermore, Reddit user _If_I_Could_Fly_ pointed out that in Season 8, Episode 2, both Sansa and Theon were sitting outside with the townspeople during the feast. "Yes, it's quite a minor little moment, but it goes to show how much Sansa changed. The snobby, weak, naive little girl is gone. The Lady of Winterfell sits with her people and eats the same grubby soup as everybody else."

She's Made It This Far

Seemingly against all odds, Sansa has survived this far in the story. Although she's been to hell and back, that she's still standing implies that the Stark will make it through Sunday's final showdown.

As 1stGradeNightmares admitted in the Game of Thrones subreddit, "[S]ince the beginning of Season 8 I was annoyed with the way Sansa reacted to Dany. I thought she was just being rotten. Now that I think about it, she was always the most qualified to spot a tyrant. She's been directly tortured by the worst of them... Cersei, Joffrey, Ramsay... she saw this coming a mile away. Feeling a new level of respect for Sansa today and kicking myself for missing the signs."

Since Sansa has Arya, Jon, and Bran on her side, the odds are in her favor. And although The Hound has died, she will likely have protection with her, as the acting Lady of Winterfell. And what's a dragon when you've got a highly trained assassin, a Three-Eyed Raven, and a former Lord Commander of the Night's Watch as siblings?

As evidenced in the Battle of Winterfell, Sansa was prepared to protect everyone in the crypt, even though she didn't even know how to wield a sword.

Although the Lannister is still Dany's Hand of the Queen, there's no way he's not going to resign after she torched King's Landing in the penultimate episode. And since Tyrion and Sansa used to be married, he may be inclined to take his ex-wife's side.

Sansa's Up In Winterfell

As far as we know, Sansa is still sitting pretty in the North, while Dany is still down in King's Landing. And unless there's a massive time jump in Episode 6 (which is not out of the question), one of these women will have to relocate in order to face off. And yes, the Dragon Queen could simply fly Drogon up to Winterfell, but would she really do that just to kill a handful of people?

Either Arya Or Jon Is Going To Take Dany Out

It's been well-documented that Arya was prophesied to kill people with brown, blue, and green eyes. And as Game of Thrones fan @Kassidykeech pointed out on Twitter, Dany has green eyes, too. Furthermore, it seems all but guaranteed now that either Dan or Jon is going to die in the Season 8 finale, and Jon has already died once, so...

She May Be The One Pulling The Strings

Whether or not this theory is true, it's certainly a compelling one. As madame_hussain laid out on Reddit, Sansa may be a lot more manipulative than she's been letting on. The post pointed out that the Stark has been mentored by two of the best schemers in Westeros — Littlefinger and Cersei — so it's not out of the realm of possibility that their sliminess could have rubbed off on her. If she really is that devious, then maybe she'll make it through this thing safe and sound. But if that's really the case, I'm not sure I'd want her to survive as a manipulator than die a martyr.

But whether or not Sansa survives Season 8, Episode 6, it's only a matter of time. But hopefully she does, because the Stark would make a great Queen in the North.