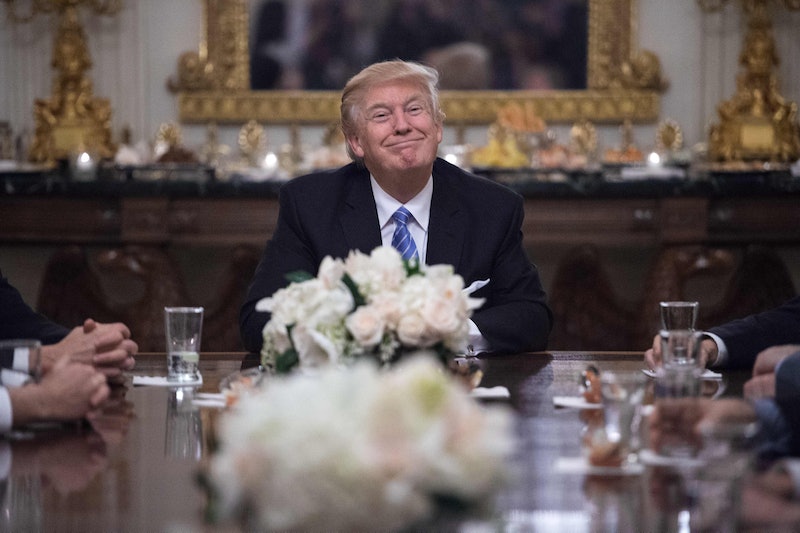 The newly inaugurated president hadn't even been in office for a full day, let alone a full week, before he started signing executive orders — and not good ones. Keeping track of the things Donald Trump has cut so far can get confusing, but it's important to stay aware of the ways America could change for the worse in the upcoming months.

Trump did promise to get rid of lots of Obama-era legislation, including the Affordable Care Act, long before he was elected. But many of his campaign promises were scary for people like me. The same is especially true for other young people, who are abruptly finding out that they may not be eligible for coverage under their parents' plans anymore, or that their contraception may no longer be covered by insurance providers either.

That's not to mention all of the people who believe in the science behind climate change, or those protesting against the Dakota Access Pipeline (including the Standing Rock Sioux tribe, on whose sacred lands the pipeline would be constructed). And free speech has even been impacted, strangely enough: Several U.S. departments were temporarily banned from social media. (Frankly, I wasn't aware the president had the power to do that, but I guess you learn something new every day.)

Here are some of the things Trump has tried to get rid of:

1. U.S. Involvement In The Trans-Pacific Partnership

The idea behind the Trans-Pacific Partnership was creating a market like that of the European Union, in this case for 12 nations bordering the Pacific Ocean. The TPP had plenty of opponents, many of which said it favored big business over sovereignty and domestic jobs, BBC News reported. Either way, all 12 countries needed to ratify the TPP for it to work. So far only Japan has ratified it, and with the United States pulling out of the partnership, the future of the TPP does not look good.

Trump framed letting the heads of government agencies not follow the requirements of Obamacare as "minimizing the economic burden" of the Affordable Care Act. The Senate voted 51 to 48 to begin the process of repealing Obamacare, and Trump’s executive order was basically an attempt to help that process along.

Lots of different aspects of Obamacare came under attack: contraceptive coverage; letting people up to age 26 stay on their parents’ plan; making sure gender doesn’t impact healthcare costs; and not being denied coverage based on pre-existing conditions, to name a few. Trump has declared that the Republican alternative plan to Obamacare will provide "insurance for everybody," while being "much less expensive and much better," The Washington Post reported. Still, he hasn't clarified the details of this plan.

At the end of his term, President Obama announced a cut to the annual mortgage insurance premium that borrowers of home loans backed by the government pay. The day Trump got into office, he signed an executive order on the subject, essentially saying "nope." According to the Department of Housing and Urban Development, this reduction has now been "suspended indefinitely." It would have saved borrowers an average of $500 each — and in 2015, more than 1.1 million borrowers used FHA loans, CNN Money reported.

It was already illegal to use federal money to pay for abortions, both within the United States and internationally, but with the Mexico City Policy, also known as the "Global Gag Rule," Trump is making sure organizations that provide abortion services or even talk about it being an option don’t get funding from the U.S. federal government. This will impact many international organizations, including International Planned Parenthood Federation, which stands to lose $100 million in funding over the next couple of years, its director of advocacy Alison Marshall told NPR.

Sanctuary cities don't enforce federal immigration laws, thus providing "sanctuaries" for undocumented immigrants. Trump's executive order is set to "strip federal grant money from the sanctuary states and cities that harbor illegal immigrants," press secretary Sean Spicer told CNN. Supposedly, the Office of Management and Budget will be collecting information on what federal grant money is already going to the sanctuary cities. The order was basically designed to intimidate lawmakers, but a lot of mayors of sanctuary cities have made it clear they will not be bending under the Trump administration’s threats.

Trump signed an order to put a freeze on hiring federal employees, the only exceptions being military personnel and critical public safety positions. Whether this ends up significantly affecting the federal workforce depends on a few factors, such as how long the hiring freeze goes on for, and whether Trump manages to get Congress to cooperate to downsize the number of civil service workers, POLITICO reported.

The Interior Department was also ordered to stay off social media for now. It’s kind of suspicious that this happened after the National Park Service retweeted images that highlighted how much smaller Trump’s inauguration crowd was than Obama’s. The NPS did eventually get to bring its account back, but only after deleting the tweets and apologizing. During a Tuesday briefing, Spicer claimed the Interior department "inappropriately violated their own social-media polices [and] there was guidance that was put out to the department to act in compliance with the rules that were set forth."

Still, not all NPS employees are down with the gag order. The Badlands NPS account tweeted about climate change even after the order, and a Twitter account, AltUsNatParkService, is supposedly run by rogue NPS employees in resistance to Trump’s NPS social media shutdown.

Obama had signed a halt on both the Keystone XL and Dakota Access oil pipelines. Despite protests by the Standing Rock tribe and other supporters of the NoDAPL cause, Trump reversed Obama’s halt on the construction. But hey, at least he signed another bill mandating the use of American steel on the pipelines...

Here's a useful read on the NoDAPL movement if you want to learn more about why people are protesting the oil pipelines.

Bad news for anyone who's into protecting the environment: Trump put a freeze on the Environmental Protection Agency's grants and contracts. Considering that the EPA awards more than $4 billion in grants and assistance to a wide range of people and establishments, this does not bode well. According to The Washington Post, employees in the agency's Office of Acquisition Management got the following email on Jan. 20:

New EPA administration has asked that all contract and grant awards be temporarily suspended, effective immediately. Until we receive further clarification, which we hope to have soon, please construe this to include task orders and work assignments.

That does not sound good.

It's also possible that the meanings of "true" and "false" has been taken away. Now we have something called "alternative facts," thanks to Kellyanne Conway and Spicer. I'm only kind of joking here.

Thankfully, there are still things we can do to try and bring back some of the things Trump has signed away. There are plenty of resources out there for those of you who want to do something, but don't know how. Here's a list of steps to organize against Trump; here's what to do after the Women's March; and here are 100 ways to fight back during the first 100 days of Trump's presidency. It's never too late to make a difference.