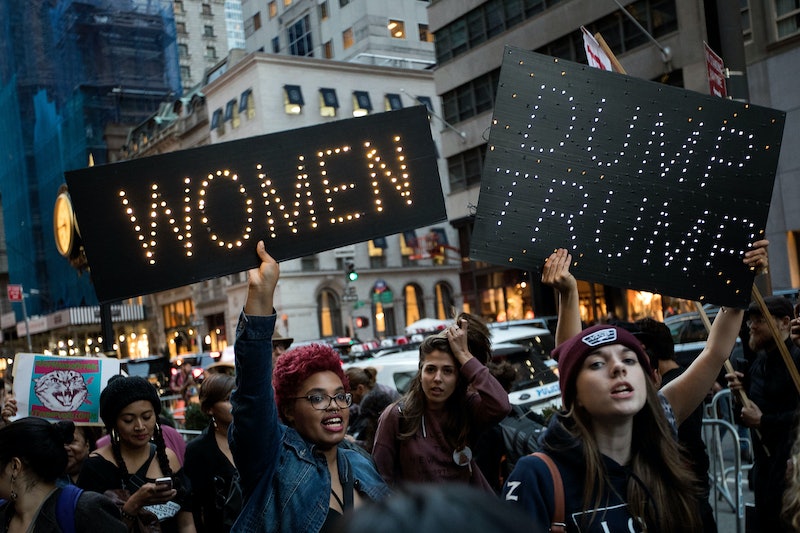 What started as a Facebook event has now become the largest anti-inauguration demonstration in U.S. history. With so many people gathered, it's no surprise that motivations for marching — for reproductive justice, a better future for the next generation, to protest violence against women— were shared amongst so many. However, the more eye-opening and unexpected reasons people participated in the Women's March began to trickle out, too.

USA Today reports that organizers estimated more than 500,000 people attended the Women's March on Washington. Another 250,000 are estimated to have marched in its Chicago satellite, according to NBC Chicago. Combine those and you'll get Los Angeles, where NBC estimates 750,000 are marching. Those are just three of the hundreds of affiliated marches that have taken place across the country on Jan. 21.

As the multitude of social media postings explaining why people are marching shows, there is no one best reason to get involved in political action and demonstrations. And in fact, it's the diversity of motivations that makes a movement stronger. Here are just some of the reasons for marching that will make you stop and think.

Marching To Make Up For The Past

The Humber College journalism department shared on Instagram the story of someone making up for lost time. The caption read:

J.P Good says he is marching on behalf of his wife who is currently marching in Pittsburg. He says that this is a great opportunity for him because he did not get to march in the 60s and 70s. "It's all about sending a message and to tell women that it's not a complete beat down here and we support them," he says.

One kid is marching in honor of women he will someday meet. Now that shows some forward thinking.

With the word out that Trump is intending to completely get rid of the National Endowment for the Humanities, liberal arts scholars need to really show up for their disciplines. And at least one Latin enthusiast did at a march.

Misogyny manifests itself in many ways in our society, including through the technology we use. It's a modern marvel and another inspiration to march.

Our new First Lady can check "inspiring people to march" off her checklist.

Because Of The New Normal

Lockdown drills are now routine in U.S. elementary schools. At least one person marched for a future without regular school gun violence in mind. Donald Trump has proposed that gun-free school zones be eliminated.

Comedian Barry Crimmins has a good reason for not heading to the march in his city. Instead he made the march accessible for someone else via dog sitting. That's a win-win right there.

To Honor An Under Celebrated Activist

Many people at the marches honored well-known suffragettes like Susan B. Anthony and activist-political thinkers like Gloria Steinem. At least one person, journalist Emily Hauser, used the march as a time to celebrate someone who isn't usually held up as a feminist hero.

Most known for learning to communicate with her teacher Anne Sullivan, Helen Keller was a deaf-blind woman who was so much more than her disability or her time in school. As an adult, Keller was an advocate for reproductive justice, amongst other activist work, and a founder of the American Civil Liberties Union.

As this tweet shows, the demonstrations have been so popular that, in some places, marching to the march was the easiest way to get there. That's extra dedication.

There are unlimited reasons so many people joined women's marches today. More than a few of them are not what you'd expect.