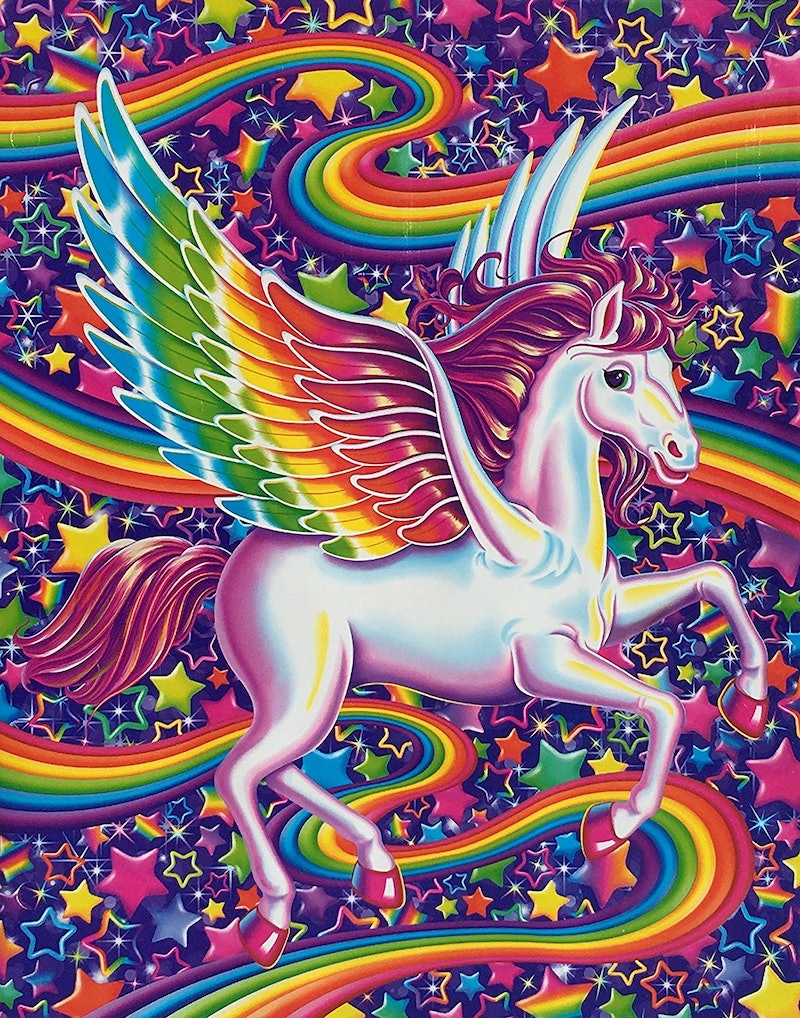 You probably already know that '90s culture has been making comeback in a big way for the last few years: Crystal Pepsi was briefly re-released in summer 2016; Full House was rebooted by Netflix and people inexplicably began wearing scrunchies again; just the other day, Kylie Jenner posted an Instagram photo of the most '90s food of all: Lunchables.

But if there's one thing that just screams 1996, it's the whole idea of Girl Power, popularized by brands and bands like Lisa Frank and the Spice Girls. But was Girl Power actually about making real political changes for women? Or was it all just clever marketing?

In the new book 90s Bitch, journalist Allison Yarrow examines the media, politics, trends, and culture of the decade through a feminist lens. In an excerpt from the book you can read below, she specifically analyzes how brands like Lisa Frank used the conspicuously inoffensive idea of "Girl Power" to capitalize upon girl spending power.

Although Girl Power was a natural successor to the loud, angry, and highly political Riot Grrrl movement, it "lacked teeth," writes Yarrow. "In other words, by the late '90s, the Riot Grrrl rebellion had been diluted and commercialized," she adds. "Ultimately, it ceased to be a rebellion at all, and instead became a full-on shopping spree."

How did this happen? Read the excerpt below to find out, and pick up a copy of 90s Bitch at your local bookstore for more:

By the mid-to-late '90s, the Riot Grrrl revolution had all but fizzled, while the troubles of girlhood, identified by researchers, persisted, if not intensified. Young women still struggled with body image, depression, and the specter of the perfect girl. Many still wanted to fulminate against the societal construction of girlhood, but they saw how women perceived as angry, manly, and difficult were summarily bitchified, so they opted to rebel by embracing girlhood but rejecting feminism. Exercising the right to be girly seemed like a logical path of self-actualization. Choice, after all, was a feminist plank. Moreover, plenty of girls weren’t ready to be the “women” their mothers’ generation told them they had to be once they turned eighteen.

Exercising the right to be girly seemed like a logical path of self-actualization. Choice, after all, was a feminist plank.

This was the backdrop against which Girl Power, a '90s mantra and marketing tool, rose to prominence. Riot Grrrl was never afraid to show its claws, but Girl Power, its successor movement, lacked teeth; it embraced the “girl” part but did away with everything else. In other words, by the late '90s, the Riot Grrrl rebellion had been diluted and commercialized. Ultimately, it ceased to be a rebellion at all, and instead became a full-on shopping spree. Where Riot Grrrl had used anger and disobedience to fight for social justice, Girl Power revered signifiers of girliness, especially those that could be purchased. Girl Power was such an effective marketing tool that girls growing up in the '90s, myself included, had no inkling of its origin as a protest movement. We thought the Spice Girls had invented it. To us, at the time, Girl Power appeared as an opportunity to delay womanhood and gain imagined parity with boys. It was “becoming a woman on a girl’s own terms,” according to the Los Angeles Times. Geri Halliwell, a.k.a. Ginger Spice, crystalized this strategy when she told a reporter that feminism needed weakening to become more palatable. “It’s about labeling. For me feminism is bra-burning lesbianism. It’s very unglamorous. I’d like to see it rebranded. We need to see a celebration of our femininity and softness,” she said.

Riot Grrrl was never afraid to show its claws, but Girl Power, its successor movement, lacked teeth; it embraced the “girl” part but did away with everything else.

Fashion trends like lace, bows, knee socks, pigtails, baby tees, baby-doll dresses, and Hello Kitty accessories emerged to celebrate the sexy little girl. Celebrities like Baby Spice, Gwen Stefani, and Drew Barrymore expertly surfed the Girl Power crest in these fashions and bleached-blonde hair, while reports cheered their helplessness and sweet personas. By presenting not as women but as girls, their success and social capital soared, as George Washington University English professor Gayle Wald wrote in her 1998 paper “Just a Girl? Rock Music, Feminism, and the Cultural Construction of Female Youth.” The “girlishly feminine persona” worn by Stefani and others “potentially furthers the notion assured within patriarchal society women acquire attention, approval and authority to the degree that they are willing to act like children,” Wald observed.

Instead of forcing change, Girl Power infantilized and sexually objectified its crusaders. But, as Wald foretold, the rewards for choosing the Girl Power path were great. And so, like a brigade of female Benjamin Buttons, grown women pursued the reversal of womanhood to girlhood through behavior and consumer choices.

Girl power was leveraged to sell. Major marketers like Coke, Toyota, Frito-Lay, and Sears “recognized the muscle of girl power,” and flocked to hook teen girls early. Market research in the '90s showed that younger demographics held tremendous purchasing power. Children ages four to 12 commanded nearly $15 billion in annual sales and influenced some $160 billion in household purchases, according to a 1994 study by Texas A&M University. Leading retailers began to market to a group too young to even secure a credit card. Some 40 percent of national marketers boasted kid-specific marketing strategies. Companies started conducting research to learn just what youngsters — and girls in particular — were spending their money on. It turned out, in 1997, teen girls spent $50 billion on things like clothes, jewelry, beauty products, entertainment, and food alone. As a CNN reporter put it: “You are looking at the future of retail, and it can barely see over the counter.”

Lisa Frank Inc. was known for school supplies and paper goods featuring kittens, bubbles, and unicorns in the colors of an exploded gumball machine. Lisa Frank understood Girl Power’s marketplace potential and devoted ample resources to capturing it. “It’s almost as if they had radar and were able to go into the minds of these young girls,” said one marketing expert on CNN in 1998. What began as paper goods carried in mall favorite Spencer Gifts grew into more costly items—sneakers, outerwear, CD-ROMs, and much more. “If a little girl uses it, chances are Lisa Frank makes it,” enthused the segment’s host.

Lisa Frank understood Girl Power’s marketplace potential and devoted ample resources to capturing it. “It’s almost as if they had radar and were able to go into the minds of these young girls,” said one marketing expert on CNN in 1998

The company might have been prescient, but it also did its homework. Lisa Frank Inc. planted product testers in elementary schools. The company recruited classrooms to focus-group experimental characters and fabrics. Lisa Frank created an online fan club and website. By 1998, Lisa Frank Inc. was banking $250 million a year by “catering exclusively to the whims of four- to 12-year-old girls,” according to one report. Company president James Green, who was also married to the founder and namesake, attributed the brand’s success to his wife being “the world’s greatest shopper” and “a little girl at heart.” But their methods weren’t always aboveboard. In 2001, the company agreed to pay a $30,000 fine for collecting personal information from children — such as their names, addresses, phone numbers, and favorite colors and seasons — without parental consent.

In 1994, Lisa Frank Inc. commissioned a study of eight- to 12-year-old girls’ purchasing preferences. Nearly half said the clothing section was their first stop in their favorite stores. Girls spent 41 percent of their money on clothes and shoes, 20 percent on magazines and books, 14 percent on makeup, 12 percent on jewelry, and 11 percent on school supplies. Green said the study was intended to help the company develop “product lines kids want, not just need.” By 1997, teen spending reached $122 billion. Girls shelled out the most for objects promising to enhance their appearance and their self-image.

Girl Power had morphed from rebellion into a miasma of consumer ideals. It became so embedded in American consumer culture that even antifeminist offenders began to claim it to move their products. One example is a Candie’s perfume ad featuring Sugar Ray’s Mark McGrath. He is staring lecherously at the camera while She’s All That star Jodi Lyn O’Keefe sits atop his computer monitor, which shows a rocket going off between her legs. The advertisement was so offensive Advertising Women of New York selected it as the most degrading, insulting, and reductive advertisement of the year. But Candie’s chairman Neil Cole claimed that the ad was all about Girl Power. A luxury watch brand used the idea to introduce young women to expensive timepieces. USA Today reported that a spate of new electronic toys created for girls empowered them. But instead of challenging girls, the toys and games allowed them to check horoscopes, “swap gossip,” and “pass notes” to one another.

Girl Power had morphed from rebellion into a miasma of consumer ideals. It became so embedded in American consumer culture that even antifeminist offenders began to claim it to move their products.

That Girl Power was co-opted to sell products didn’t surprise parents. The vast majority — 92 percent — said they were worried that kid-centered television advertising was making their children “too materialistic” and “turning them into chronic consumers,” according to one report. Some skeptics did push back on commodified Girl Power. “An ideology based on consumerism can never be a revolutionary social movement,” said North Carolina State University professor Amy McClure in a paper about Girl Power that she presented at the American Sociological Association. “The fact that it appears to be a revolutionary movement is a dangerous lie that not only marketers sell to us but that we often happily sell to ourselves.”

Excerpted from 90s Bitch: Media, Culture, and the Failed Promise of Gender Equality by Allison Yarrow. With permission from Harper Perennial.

More like this
She Founded American Girl To “Bring History Alive.” Then She Made Over A Town.
By Amanda FitzSimons
15 Offensive AF Jokes In 'Friends' That Really Aren't OK
By Tolly Wright, Bustle Editors and Meguire Hennes
10 Must-Read New Books Out This Week
By K.W. Colyard
Read The First Pages Of Emma Rosenblum’s Highly Anticipated Debut, 'Bad Summer People'
By Samantha Leach
Get Even More From Bustle — Sign Up For The Newsletter