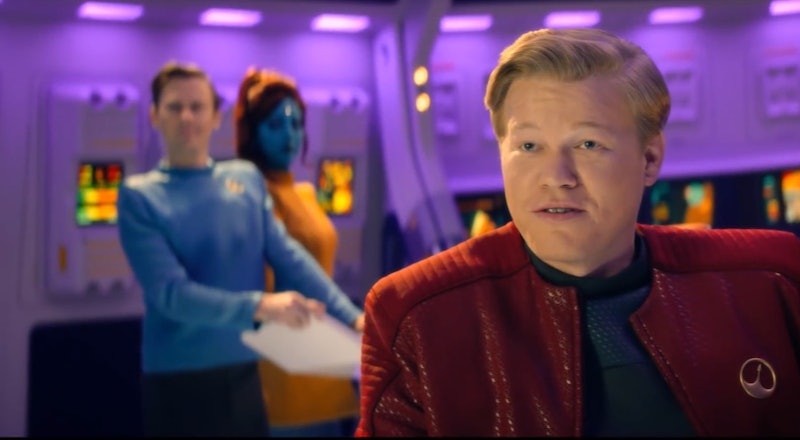 Who said technology has killed romance? A new anthology series from Black Mirror writer Will Bridges and comedic actor-writer Brett Goldstein on AMC will be a unique take on finding true love in the future. (And, no, it doesn't involve Tinder.) As The Hollywood Reporter revealed on May 16, the yet-untitled, six-episode sci-fi and romance hybrid is "set 15 years in the future, when science makes a discovery that changes the lives of everyone on the planet — a way for people to find their soulmate."

Similar to the Netflix sci-fi anthology series, Black Mirror, each episode will also feature a different story, tone, and an entirely new cast — though all will fall under the scope of various couples discovering "the cost of finding true love," as described by THR.

"The show explores how technological innovation can impact the most delicate matters of the heart, and each episode will turn personal life choices into high-stakes drama," AMC president of programming, David Madden, told THR. "It’s a fresh yet relatable idea, portrayed through wildly entertaining tales with unexpected twists, humor and meaningful emotion. Will and Brett are immensely talented creators, and we are thrilled to have these new and observant voices on AMC.”

Indeed, Bridges is certainly qualified to be at the helm. Aside from the fact that the show — AMC's first foray into this style of storytelling — will be based on his and Goldstein's 2013 short film, For Life, he's no stranger to the sci-fi genre. Not only was Bridges behind Black Mirror's Season 3 episode "Shut Up and Dance" and "USS Callister" from Season 4 (the latter for which he won an Emmy for Outstanding Writing For A Limited Series, Movie Or Dramatic Special), he also wrote an episode for the upcoming Stranger Things Season 3 called, “The Case of the Missing Lifeguard.”

For those who haven't seen his wildly popular, Emmy-winning Black Mirror installment from December 2017, "USS Callister" is a Star Trek-style parody, which starred Friday Night Lights and Breaking Bad's Jesse Plemons and Cristin Milioti of How I Met Your Mother fame — and even featured a voiceover cameo from Aaron Paul, Plemons' Breaking Bad co-star. The episode told the story of a digitally cloned spacecraft crew trapped in a virtual prison within a video game. In true Black Mirror style, said "prisoners" are also able to interact with the games players (one of whom happens to be voiced by Paul).

“I'm thrilled to be working on this show with AMC," Bridges said in a statement via THR. "To get the opportunity to expand on the short film Brett and I made and tell new stories about how messed up love can make a person is something we're both very grateful for and extremely excited about."

Added Goldstein with a touch of hilarity, "I am extremely excited and honored to make our show about soulmates with AMC, the network responsible for at least two of my favorite shows, one of which I definitely watched legally.”

And theirs is sure to be a new favorite show for sci-fi buffs — particularly fans of Black Mirror.

More like this
Stanley Tucci Is Next Level In The BBC's 'Inside Man' Trailer
By Sam Ramsden and Sophie McEvoy
How A Location Blunder Changed The Outcome Of 'The Capture' S2.
By Darshita Goyal
Wedding Season’s Omar Baroud Currently Stars On West End
By Darshita Goyal
The New 'National Treasure' Series Trailer Teases The Return Of A Popular Character
By Grace Wehniainen
Get Even More From Bustle — Sign Up For The Newsletter