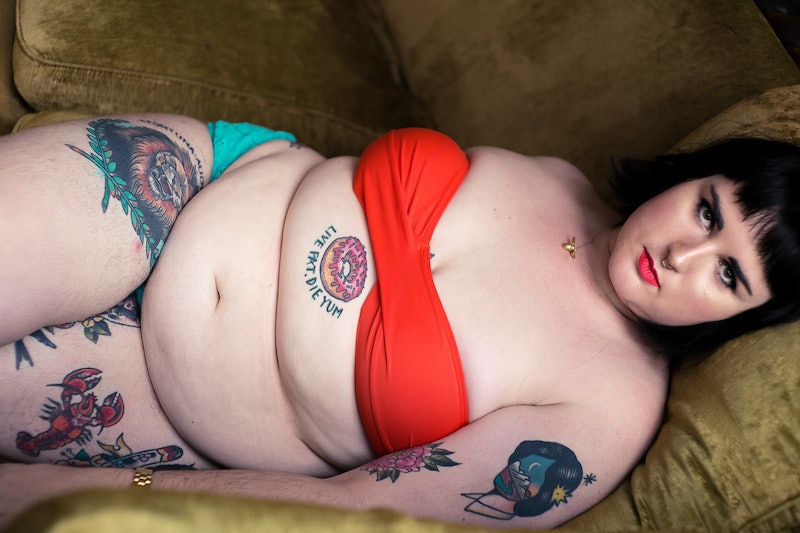 With award-winning photographer Substantia Jones of The Adipositivity Project and Manchester-based photographer Paddy McClave, Bustle is launching A Body Project. A Body Project aims to shed light on the reality that "body positivity" is not a button that, once pressed, will free an individual from being influenced or judged by toxic societal beauty standards. Even the most confident of humans has at least one body part that they struggle with. By bringing together self-identified body positive advocates, all of whom have experienced marginalization for their weight, race, gender identity, ability, sexuality, or otherwise, we hope to remind folks that it's OK to not feel confident 100 percent of the time, about 100 percent of your body. But that's no reason to stop trying.

The first time I meet Bethany Rutter face to face, she arrives in a glamorous, sparkly sweater from Zara with a very trendy black slip dress underneath it. The nature of our London encounter means that a few minutes later, she is confidently stripping down to a two-piece, low-rise bikini in front of a couple other bloggers, a photographer she's never met before, and myself. Her swim top is strapless and tangerine-colored; her bottoms are turquoise. But one of the first things I notice is the doughnut tattoo inked on her upper belly. I've been seeing it in online images for years. Seeing it IRL is a different experience entirely.

Beneath the glazed and sprinkled sweet treat reads the slogan, "LIVE FAT, DIE YUM." The illustration would be a bold statement in and of itself. Maybe as an Instagram snap or an Etsy print worthy of being framed atop the mantel. Etched on a queer, fat femme's stomach, however, it's made all the bolder.

Although she can’t really remember what prompted getting the tattoo, she thinks "it was maybe the end of the realization that I was probably going to be fat forever. Like in varying degrees for the rest of my life," she later tells Bustle. "I was never going to be thin. And it was just a way of saying, 'I’m comfortable with this and you don’t have to fight it.'"

As the style blogger and social media editor begins posing for her photo shoot, the combination of a piercing, no-effs-to-give stare and the effortlessness with which she seems to understand her body makes it incredibly difficult to believe that her belly has ever made it to the list of "problem areas" so many of us humans seem to keep internally.

In actuality, Rutter has never held that much disdain for her figure, belly included. "I was just really conscious of the fact that I was somehow deficient in a way that maybe other people around me weren’t, and that I should be embarrassed of something I didn’t have that they had," she tells Bustle. "So for me, I never had a problem with my body. I was just so aware that other people had a problem with fat bodies."

When she looks back at photos in which she was younger, Rutter doesn't even feel that she was all that different to her peers. "But I must’ve been because it was always such an important thing about me," she says. Her fatness was always something people seemed to clock.

Her belly in particular felt like the focal point of this thing that was supposed to breed shame within her, in part because of its fatness but also because of two scars that she's had on it since childhood. The first she received from Pyloric Stenosis as a baby. The second was from appendicitis at age four, "and it was like pre keyhole surgery, so I have a big scar," she tells Bustle. "Weirdly, [the scarring] was never really something I worried about. And maybe if I was thin that would be like a thing that I’d fixate on. But I’ve really never cared about them because the main mental thing for me was my fat."

While Rutter's greatest challenge has never been overcoming body hangups per se, "trying to position my world in a place and in spaces where I was not treated badly because of [my body]" was more of a journey. A crucial turning point in that department came via her dating life. "I think for a long time I always really felt like dating was going to be difficult for me because I was fat and that was like so undesirable and no one interesting and attractive would want to go out with me," she remembers. But the more time she spent actively participating in the dating world (rather than just letting things happen to her at random) the more she "realized that repeatedly going out with people who I found interesting and attractive was not some kind of cosmic accident. It was a regular feature of my life, and my weight wasn’t really holding me back in that way."

Rutter acknowledges that fat women are generally subject to an added layer of misogyny in this world. She also acknowledges that her privileges outside of size might factor into her generally positive experiences in this realm. But shedding light on the simple fact that your fat does not have to ruin any aspect of your life is still of utmost importance to her.

"For such a long time — for maybe the first two years that I was on OKCupid — I would view all of my potential partners or dates through the lens of 'Who will find me attractive? Who looks like the kind of person that will fancy me?'" she tells Bustle. "And then, after a while [...] I was just like, 'OK, well this isn’t working out for me because I’m just meeting people that I don’t fancy. And the fact that they fancy me does not add any value to my life.' Like, if I’m not interested, then where does this get me? So one day I was just like, 'OK, what have I got to lose? I’m just going to message a bunch of people that I think are attractive and see what happens.' And that really changed everything for me, because I discovered that people I found attractive also found me attractive. From then on, I had a constant flow of interesting, attractive people in my life. It made my life more fun and pleasant, being an active participant in my love life."

For fellow fat babes wanting to explore the world of online dating, but who might be reluctant because of potential fatphobia to be encountered, Rutter has a few tips. Rather than acknowledging her fatness in a way that might come across as hostile (like writing "I am fat and if you have a problem with that then fuck off" on her bio), Rutter goes for something like, "Cool fat babe with tattoos looking to meet blah blah blah,” she says. She totally understands the urge to be defensive, of course. From her experiences, it just doesn't translate into "quality dates."

She's also pro full-body pictures. "My worst nightmare would be getting on a date and realizing that they didn’t realize that I was fat because I had withheld that," she says. "That would be so much more embarrassing for me than someone rejecting me before we even met because I was fat. I’d rather not end up on a date with a fatphobe than put myself in a position where I have to spend like an hour and a half talking to someone who thinks I’m disgusting."

Rutter knows she cannot promise that nothing bad will happen to any other fat person who wears a low-rise bikini to the beach, or a crop top on the subway, or who posts full-bodied photos online. "The reason that we are afraid of fatphobia is because it exists," she notes. "Getting to a point where you don’t care about whether something happens," however, has the potential to be a life-changing decision.

One thing she keeps in mind is that her body is not the problem when it comes to fat antagonism; it's the people propagating said fat antagonism. "I’m just annoyed that these people exist in the world [...] that these people are out there trying to distress people," she adds. "I like to think that there’s basically nothing that could happen to me that would affect the way I feel about my body, but that doesn’t give people who are making people feel shit a free pass."

One way to reach this point of not caring might be "populating your eyes with pictures that reflect your reality," she advises. "Follow loads of people on Twitter, add people on Facebook that you know from other places around the internet, just follow loads of Instagram accounts, watch YouTube videos, read blogs, that’s like the best thing you can do for yourself. No one’s going to do it for you. Mainstream magazines are, at best, going to give you a token article every six issues. And at worst, they’re going to make you feel actively bad about yourself. So check out of that altogether, stop reading them." Personally, she's managed to completely eradicate diet content from her world. "I know that that’s a thing that really exists. But I just never see it, because I carefully curate what I read."

Above all, though, she just wants people to know that their bellies — their bodies — aren't all that important in the first place. "It’s a thing that you’re fixating on and no one who cares about you is going to care about it," she says. "It’s not a thing that you’re going to lie on your deathbed and wish you’d worked harder on. We devote so much negative brain labor to it and I know it’s hard to opt out, but the sooner you do, the better."

Having like-minded people both on your news feed and in your life is one surefire way to start the opting out process. Rutter's universe is full of "people who don’t talk about their bodies" in purely negative capacities; people who, she adds, are "far too interesting to talk about stuff like that." And yours can be, too. All you have to do is make the conscious decision to seek them out and spend your time with them — and not with anyone who's hellbent on making you feel inferior, deficient, or otherwise flawed.

More like this
Berriez Founder Emma Zack On Her Size Inclusive NYFW Show
By Dominique Norman
Androgynous Formal Wear That Will Make You Feel *So* Fancy
By Megan Lasher
The 12 Best Strapless Bras That Won’t Slip & Fall Down
By Audrey Williams and BDG Commerce
Help! I'm Not Getting Any Attention On Dating Apps. What Can I Do?
By Sophia Benoit
Get Even More From Bustle — Sign Up For The Newsletter