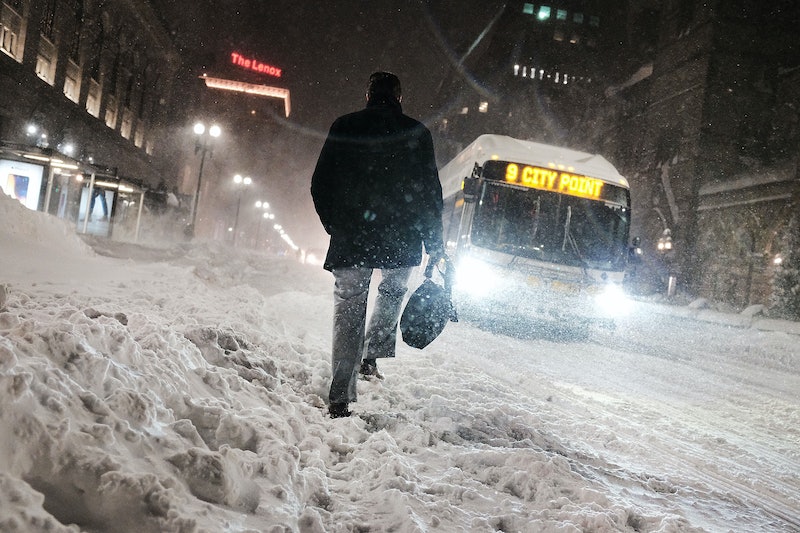 This week, much of the Midwest has been experiencing welcome spring-like weather after a long winter. However, mother nature has apparently decided that winter isn't quite over. A potential bomb cyclone could hit the Midwest and the Plains this week, and it's bringing frigid temperatures and possible snowstorms along with it.

As NPR explained, a bomb cyclone is essentially a quickly intensifying storm. Technically, as the outlet noted, it's characterized as a storm system in which the atmospheric pressure decreases by at least 24 millibars in one day. This rapid drop in pressure means that storm-like conditions can quickly arise after seemingly calm weather the day before, NPR described.

As CNN revealed, the current storm system is just on the cusp of meeting criteria to be classified as a bomb cyclone, so it's not yet clear if it'll officially receive this designation. However, either way, the storm looks like it'll be a big one.

As the outlet described, there are already winter storm watches in many states across the Plains region, including Minnesota, Wyoming, Nebraska, and South Dakota. CNN indicated that these states could endure significantly colder temperatures along with substantial snowfall by midweek. In fact, the Weather Channel reported that "at least six inches of snow now appears likely in a swath from Wyoming and northeastern Colorado to northern Michigan."

Moreover, snowfall is expected to be so heavy in some areas of the United States that the National Weather Service has issued blizzard warnings. As the Weather Channel reported, the storm will become "a major blizzard" in the Plains on Wednesday and Thursday, and it could create exceedingly dangerous travel conditions. Blizzard warnings are in effect for various parts of Colorado, South Dakota, Kansas, Minnesota, and Nebraska, the network noted.

This potential bomb cyclone comes on the heels of another one that hit the Midwest and the Plains in mid-March, CNN noted. The March storm produced heavy snow and rainfall that then resulted in devastating flooding across the Midwest, especially when the weather warmed, CBS said. The outlet added that forecasters are concerned that this week's storm could again produce similarly substantial levels of flooding.

NPR noted that it's not uncommon for the Midwest and the Plains region to experience dramatic temperature fluctuations during spring. However, fluctuations that are accompanied by such substantial precipitation are a bit rarer. "We usually get a winter storm sometime in April," Kari Fleegel of the National Weather Service said to host Gary Ellenbolt during a discussion aired on South Dakota Public Broadcasting radio. "However, amounts that we have forecast right now are pretty rare. Some of this might be record territory."

Overall, the Weather Channel emphasizes that this week's storm "is another reminder of how volatile and active April weather can be." As the storm approaches, those residing in affected areas — especially areas under blizzard warnings — are urged to take caution and engage in very limited travel, if possible. “We want people to understand that the impacts of the storm are going to be great,” Kari Bowen, a National Weather Service meteorologist, told the Denver Post. “You’re going to see near zero visibility during the blizzard.”