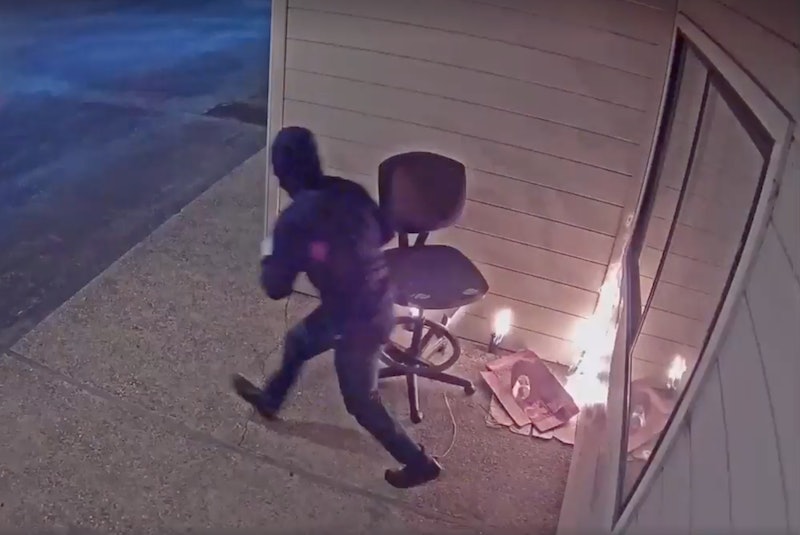 As the investigation continues into who started a fire at a Planned Parenthood clinic in Watsonville, California in July, the FBI is now offering a $10,000 reward for information leading to the arsonist's arrest. The local Watsonville Police Department announced the reward on Facebook and Twitter along with surveillance footage of the unidentified suspect deliberately starting the fire.

"At this point, we’re asking for the community’s help in identifying the person seen on surveillance footage," the police department's post read. "Although you cannot see the suspect’s face, we’re hoping someone will recognize this person based off of his/her physical description, clothing and mannerisms."

The suspect, who covered their face with a hoodie, started the fire around 4 a.m. on July 20, according to the post. The flames smoldered for roughly three hours before someone noticed smoke coming from the building and called 911, leaving the building with "moderate damage," per the police department's description.

Though the newly-released security footage has sparked headlines, the Watsonville fire wasn't an isolated incident. A report published by the National Abortion Federation (NAF) found an "escalation of hostility and targeted activity" toward abortion providers in 2017. Trespassing more than tripled at abortion clinics, death threats and threats of harm nearly doubled, and incidents of obstruction rose from 580 in 2016 to more than 1,700 in 2017, per the study.

"We know that hostile rhetoric, including rhetoric from anti-abortion elected officials, can incite some to take the law into their own hands by threatening abortion providers and committing acts of violence," NAF President and CEO Vicki Saporta said in a May statement. "We cannot be silent as others continue to publicly vilify doctors and clinic staff, thereby jeopardizing their personal safety, in order to advance their own personal and political agendas."

From 1977 to 2017, there were 11 murders, 26 attempted murders, 42 bombings, and 187 arsons directed at abortion providers, according to the NAF. The 2017 report attributes the recent rise in violence to "anti-abortion extremists feeling emboldened by the current political environment" — and the Watsonville fire proves that the violence hasn't stopped.

The abortion debate has been at the forefront of many Americans' minds recently as President Donald Trump's recent Supreme Court nominee moves through the confirmation process. Trump promised in 2016 to appoint Supreme Court justices willing to overturn Roe v. Wade, the landmark decision that guaranteed the right to an abortion in 1973. Though he later walked back that statement, he hasn't budged in his vocal opposition to abortion access. And his latest pick, Brett Kavanaugh, gave vague answers on the issue during his Senate Judiciary hearings last week.

"Given the political climate and the increase in hate incidents throughout the country, it is more important than ever that law enforcement and prosecutors appropriately respond to anti-abortion criminal activity," Saporta said in her May statement.

In that vein, the Watsonville police are working with CalFire arson investigators, the FBI, and the Bureau of Alcohol, Tobacco, Firearms and Explosives to identify the person who set a Planned Parenthood clinic ablaze earlier this summer. They ask that anyone with relevant information contact the police department.