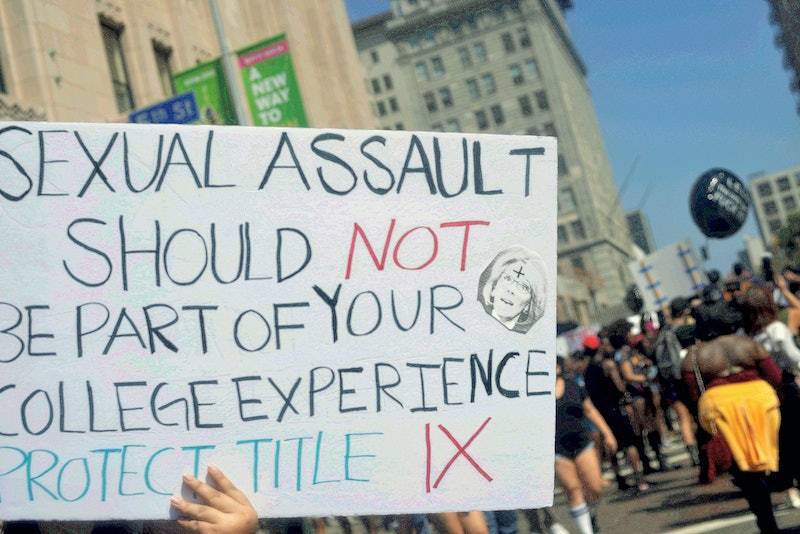 Over in California, a young woman is suing UCLA fraternities over sexual assault policies that she says do not do enough to protect potential and alleged victims. In addition to the three Greek-related groups on UCLA's campus, she is also suing a man she claims sexually assaulted her at a party in August of 2016.

The young woman is identified only as Jane Doe in the court filing, according to The Los Angeles Times. Doe says that a former UCLA student, whose lawyer is attempting to have his name removed from the lawsuit, sexually assaulted her when she was drunk after a night of partying; the alleged abuser's attorney says that Doe consented to the sexual encounter, according to the Times.

Doe is suing her alleged abuser for for assault, battery and intentional infliction of emotional distress, the Times reports. She's also suing Zeta Beta Tau, Sigma Alpha Epsilon, and the UCLA Interfraternity Council for negligence, arguing that the three organizations failed to protect her from sexual assault.

Specifically, Doe claims that members of Sigma Alpha Epsilon continued to give her alcohol at their party even after she was visibly intoxicated, and that when she ended up in bed with her alleged abuser at Zeta Beta Tau the next morning, members of that fraternity failed to intervene. She also says that Zeta Beta Tau didn't investigate the incident after she informed its president of what happened, and additionally, that a member of the fraternity's board attempted to convince her not to report the incident to the university, according to Haaretz.

The university conducted an investigation, interviewing Doe, her alleged abuser, and 16 additional witnesses; according to Haaretz, the university also looked into claims that the same alleged abuser had assaulted a different woman in 2015. Investigators concluded that Doe's alleged abuser overtook her "by use of force, and by intentionally taking advantage of her incapacitation." Her alleged abuser was expelled from the university, and although he later appealed his expulsion, his appeal was rejected.

Doe claims in the suit that she reported the incident to the president of Zeta Beta Tau, of which her alleged abuser was a member, but that the fraternity didn't investigate. She also says that a lawyer on the board of the fraternity attempted to dissuade her from reporting the incident to the school. After she filed a Title IX complaint with UCLA, however, her alleged abuser was expelled from Zeta Beta Tau, according to Haaretz.

The UCLA fraternity lawsuit comes as the Trump administration continually proposes altering its requirements for how colleges and universities respond to sexual assault reports. Just last week, The New York Times reported that Education Secretary Betsy DeVos is considering proposing policies that could shield those accused of sexual assault and harassment, and which could that could protect college staff from legal repercussions.