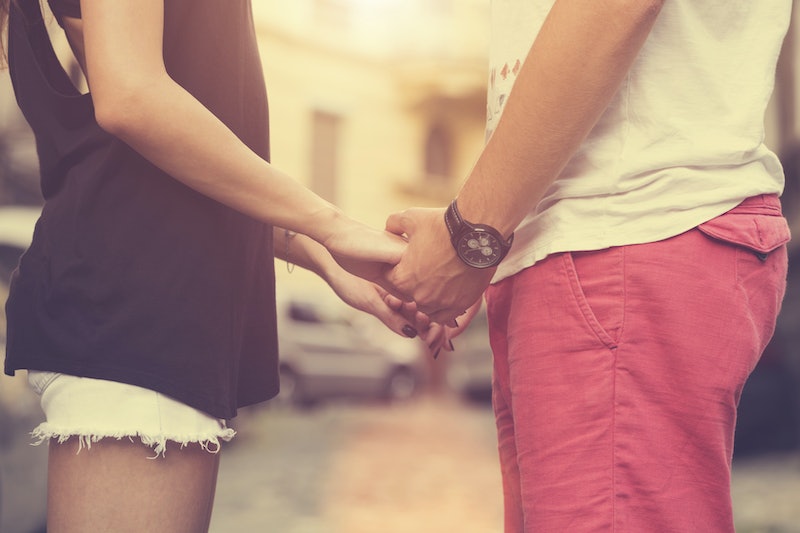 Meet Zoe and Rob, the couple who has taken Twitter by storm. Why? Well, you know how annoying some couples are on social media? The ones who share every little bit about their relationship and are so cute it makes you want to puke? Basically, this couple is that — but they nailed it. Like, they really nailed it. It makes even cynics like me have to pause for a second and bask in their cuteness.

Zoe has been updating her relationship on Twitter since it began. And I mean updating. It one continuous thread, she has traced their relationship by replying to ourself with "UPDATE" and then a little note about where the relationship is at. It's a lot of commitment and since last November, this thread has seen them go from zero to 100. It starts with that classic tale. Boy sells girl iPhone. Boy and iPhone girl go out for tacos at one am. Romance ensues. OK, it may not be a classic tale. But you can see the whole thing on Twitter. (SPOILER ALERT: They are married and on their honeymoon. And their thread is still being updated.)

Here's how it began — with an update about the cute guy she met who she ended up dating.

Seems simple, right? It's just an update. But then it continued.

And she kept updating everyone as the relationship went on — on pretty much every single detail of the sickeningly cute things he did— SERIOUSLY THEY ARE TOO CUTE AND IT'S ALMOST PAINFUL. There are updates of when he met the family, updates of all the little lovely things together, etc. It's one huge, adorable thread of relationship goals and smiles.

Oh, just casually getting flowers from the most smiley boy in the world. There are a lot of updates like this. But then it got serious. Then came the big update. The really big update.

Boom! They got engaged. But it didn't stop there. Not even close.

AND THEN CAME THE BIGGEST UPDATE OF THEM ALL:

Holy shiz. Basically, they've been tracing their relationship all the way through marriage and beyond. She's still updating — currently from Italy. As you might imagine, the internet has basically overloaded on cuteness. People all over twitter are freaking out.

This face is all of our faces:

You may normally find relationship updates on social media a little difficult to swallow, but damn, this couple did it right. If you're going to do it, at least really commit so we can see the whole story and become emotionally involved, which now the whole Internet is.

So have a great honeymoon, guys. You've earned it.

More like this
The Differences Between Kinks & Fetishes, Explained
By Lexi Inks
Are Quality Time & Gift-Receiving Love Languages Compatible?
By Lexi Inks
It's A Pleasure #53: Help! My Boyfriend Won't Tell Me Why He Stopped Going Down On Me
By Sophia Benoit
Breeding Kinks Have Been On The Rise Since Roe V. Wade Got Overturned
By Lexi Inks
Get Even More From Bustle — Sign Up For The Newsletter