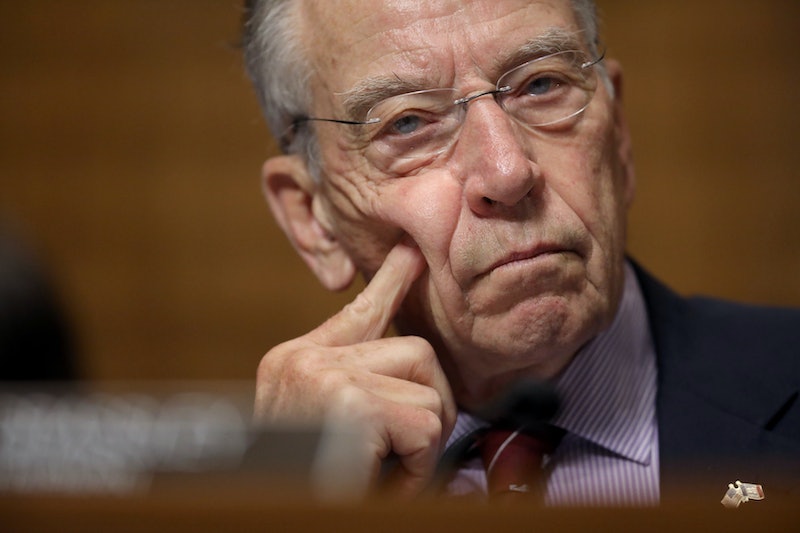 It took weeks of negotiating to get the Senate Republicans to ask for an FBI investigation into the allegations against Judge Brett Kavanaugh, including protests by Sen. Jeff Flake. But for one false Kavanaugh accusation, the Senate Judiciary Committee referred the issue to the FBI and Department of Justice for criminal investigation on Saturday.

Committee chairman Sen. Chuck Grassley wrote the letter requesting the investigation and said that making false accusations is "potentially illegal." Multiple studies show that while this case may be one of the few false accusations out there, they are proportionally minuscule compared to accurate accusations of sexual assault.

Kavanaugh has denied all the accusations against him and Bustle has reached out to the White House for additional comment.

Experts said that the false accusation would hurt the others made against Kavanaugh, and sending it openly for further investigation could have the aim of supporting that narrative. "It seems like an effort to emphasize that not all reports were accurate," Renato Mariotti, a defense lawyer and former federal prosecutor, told USA Today. "This is a way to suggest you can't trust all the allegations made to the committee and could cause some people to draw conclusions that more are false."

Of all accusations of rape (Kavanaugh has only been accused of attempted rape, which he denies), between just 2 and 10 percent have been shown to be false, according to one study in 2010. A 2017 study put the number at 5 percent. And that doesn't count the large number of sexual assaults that aren't reported at all.

That didn't stop Grassley from making a big deal out of his letter. "The Committee is grateful to citizens who come forward with relevant information in good faith, even if they are not one hundred percent sure about what they know," Grassley wrote. "But when individuals provide fabricated allegations to the Committee, diverting Committee resources during time-sensitive investigations, it materially impedes our work."

Then he explained what was illegal and pushed the FBI to investigate seriously. "It is illegal to make materially false, fictitious, or fraudulent statements to Congressional investigators. It is illegal to obstruct Committee investigations," Grassley wrote. "I hope you will give this referral the utmost consideration."

Also on Saturday, news broke that the investigation into the accusations against Kavanaugh, all of which he denies, are being limited in scope by the White House. There's also a one-week deadline on the FBI investigation, which is not criminal but just an expanded background check.

President Donald Trump has tried to push back against initial reports about the limited scope, saying the FBI has "free rein," but The New York Times reported that the investigation is limited to just four interviews. One of those to be interviewed is Kavanaugh's friend Mark Judge, who Ford alleges was in the room when she was sexually assaulted. Many Democrats wanted to question him during the hearing and suggested he be subpoenaed.

Senate Republicans decided who would make the cut, not Grassley or the Senate Judiciary Committee, as Kavanaugh has already advanced to the whole chamber. Senate Majority Leader Mitch McConnell shared who Senate Republicans wanted interviewed with the White House, which sent it on to the FBI.