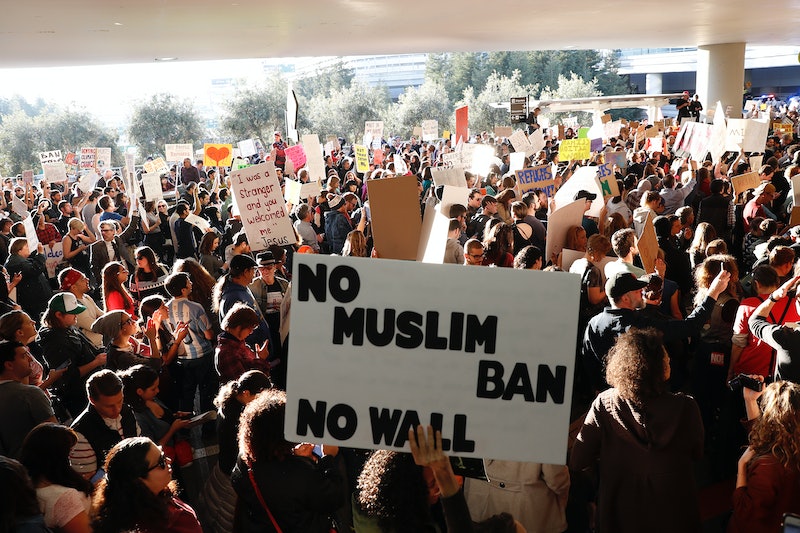 On Saturday night, a federal court in New York issued a temporary stay of Donald Trump's immigration order, which should theoretically stop the order from being put into effect across the country. The judge's ruling is a victory for human rights and for activists, many of whom had been protesting throughout Saturday. However, it is a temporary ruling, and it's anticipated that the White House will seek to have it overturned as soon as it can.

The stay would allow detainees in U.S. airports who have legal U.S. visas to stay in the country temporarily. It applies only to those who are already in the U.S. or in transit, but not those who would have traveled in the future.

The ruling came after a petition was filed on behalf of two immigrants who had been detained upon reaching the United States over the weekend: Hameed Khalid Darweesh and Sameer Abdulkhaleq Alshawi. Jackie Vimo, who according to Twitter is a policy analyst, was live-tweeting from the courthouse at the time. Large crowds gathered outside the courthouse on Saturday night.

Vimo described the hearing on Twitter: "Judge Donnelly "The stay is granted! ... Judge: "Class is pretty well defined as outline in the papers - otherwise would be reviewing stays for a hundred people" so stay is national ... 4 factors have been met: Irreparable harm established, likelihood of success on merits, no harm to govt. Likelihood of class cert ... Can you provide a list of who is detained. US: "We don't know, people are coming in all the time." Judge Donnelly: "Work it out.""

One of the plaintiffs in the petition, Darweesh, had worked beside the U.S. military in Iraq. "Our courageous plaintiff and countless others risked their lives helping US service members in Iraq. Trump's order puts those who have helped us in harm's way by denying them the safe harbor they have been promised in the United States," the direction of the NILC said in a statement.

Trump's executive order, issued on late Friday afternoon, sought to ban all refugees from entering the U.S. for at least three months, and potentially longer if the refugees are Syrian. The order had taken effect immediately.

The order also stopped citizens of seven Muslim-majority countries, even dual citizens and green card holders, from entering the country.

On Saturday night, thousands had gathered to protest the immigration order at a number of airports across the United States.