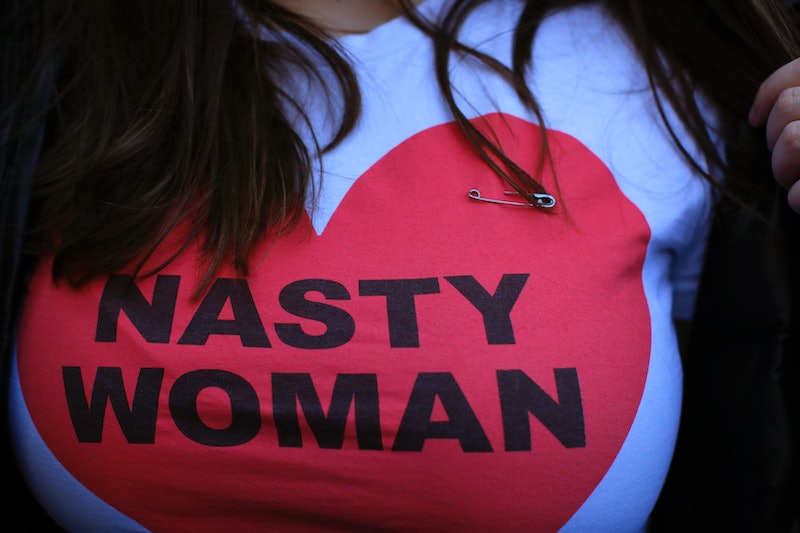 Not only was Friday Inauguration Day, it was also the day before the Women's March on Washington and therefore the day hundreds of thousands of women were traveling across the country to get to D.C. for the event. Among the many planes full of women preparing to march for their rights taking off, a Spirit Airlines flight attendant had a Women's March message for the Nasty Women on board.

A flight attendant came over the intercom after a flight touched down in Baltimore to ask how many of the passengers are planning to attend the March, and when the plane cheered, she offered some words of solidarity and advice:

You guys are going to the Women's March, right? Let's get a round of applause for all the nasty women on board. Stay safe, stay hydrated, have a good time, watch out for your fellow sisters. Just remember, we don't take no 'ish' from no man.

The announcement perfectly embodied the sentiment of the march as an event for women to ban together and tell not only President Donald Trump but also everyone involved in government that women's rights are human rights. It's so encouraging to see the women attending the event to be supported throughout their journey to Washington.

Throughout Friday, many marchers traveling to D.C. realized how many of their fellow Women's March participants were on their flights and began posting photos to show the large community of women coming together for the cause. On Thursday, a Southwest plane lit up the cabin in pink lights for all the Nasty Women on board.

The New York Times reported that the march organizers expect to see around 200,000 participants on Saturday, but law enforcement is preparing for a crowd of up to 400,000. The march will start at Independence Avenue and Third Street at 10 a.m. Besides marching, participants will gather for rallies where Gloria Steinem, Angela Davis, the mothers of Trayvon Martin and Eric Garner are expected to speak, according to NPR. Many celebrities are anticipated to be marching as well, including America Ferrera, Uzo Aduba, Patricia Arquette, Scarlett Johansson, Julianne Moore, Hari Nef, Katy Perry, Zendaya, and many more.

Hopefully the march itself will be met with the kind of support that women across the country are finding in their travels to it. It's an important symbol of resistance and refusal to accept the treatment that has been displayed during the election. At the very least, Washington will have to face the fact that women will not sit down and be quiet when their rights are being threatened. Not now, and not in the next four years.