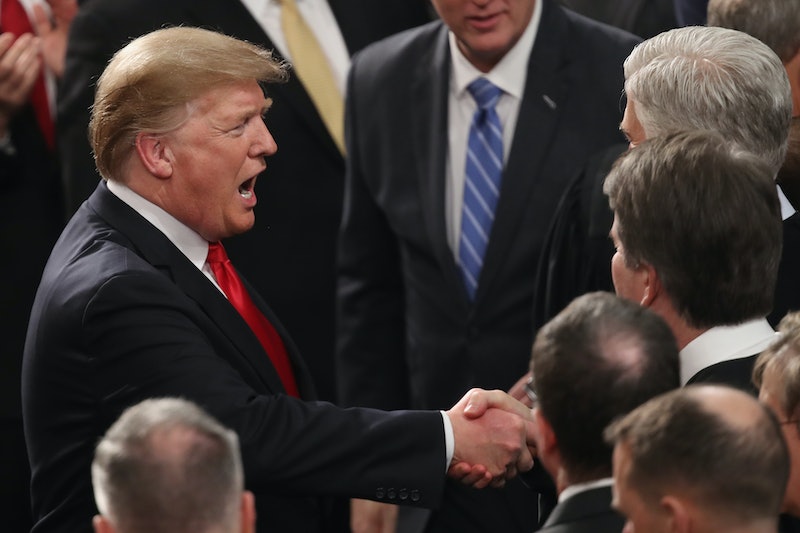 A study published in March revealed the gender breakdown of federal judges confirmed under Trump, the HuffPost reported on Tuesday. The stunning majority of Trump's confirmed appeals court and approved district court judges were male and white, according to a Congressional Research Service analysis.

Critics have long argued that Trump's picks for the American judiciary could ultimately shape the makeup of federal courts for years to come. In 2018, the former head of the Civil Rights Division at the Department of Justice, Vanita Gupta, lamented the lack of diversity in Trump's judicial picks. "Our nation's great diversity should be reflected in its government institutions, especially the federal judiciary, which serves as the guardian of our rights and liberties," Gupta told NPR.

The racial breakdown of Trump's judicial picks during his first two years in office indicates a lack of diversity on that front, too. The Congressional Research Analysis on the subject revealed that 90% of Trump's confirmed circuit court nominees were white. Only 10% were Asian American. None of the nominees in this specific category were African American or Hispanic.

It's not particularly diverse in the category of Trump's confirmed district court nominees, either. The research noted that 92% of his picks were white. Only 2% were African American, another 2% were Hispanic, and 4% were Asian American.

Advocates of racial and gender diversity in federal circuits argue that the American judiciary should equitably and impartially reflect the demographics of the country. In January, the president and chief executive of The National Association for the Advancement of Colored People (NAACP), Derrick Johnson, wrote in The Washington Post about the "paucity of diversity" in the federal bench under Trump.

In his op-ed for The Post, Johnson wrote that a diverse federal judiciary had the power to encourage people to place their faith in the court system for fairness and accountability. But with the dearth of racial and gender representation in Trump's federal judiciary, Johnson wrote of this equity: "It will take years, if not decades, to recover."