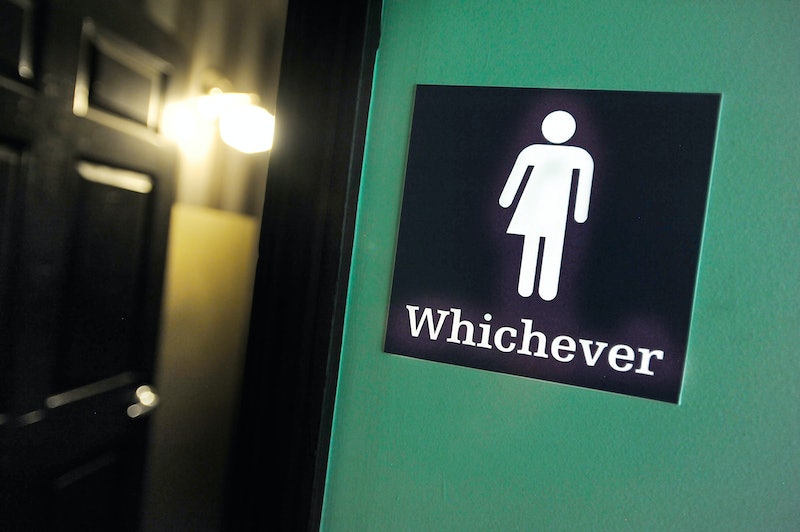 With an overwhelming vote Wednesday in favor of the bill, the New York City Council passed a change granting residents the option to identify as "x" on their birth certificates. For non-binary New Yorkers who do not identify as either male or female, or for those who identify as multiple genders, the legislation could help them navigate public life with more ease.

The bill would also allow non-binary New Yorkers to change their gender identification to "x" on their birth certificates without a doctor's approval. According to New York Daily News, Mayor Bill de Blasio is expected to sign the bill into law. Bustle has reached out to the mayor's office for comment.

NYC Council Speaker Corey Johnson delivered remarks on the bill at a conference at the council on Wednesday. "There are plenty of New Yorkers who don’t identify as either male or female," Johnson said. "Gender is a spectrum for many folks, and it’s not a fixed thing."

"So for New Yorkers who are transgender," he went on to say, "who are gender non-conforming, who are non-binary, to have an option to better self-identify on such an important document, their birth certificate, unlocks all sorts of things for them."

"To actually have a certificate that matches who you are, it’s not just the importance of unlocking the things you deserve," the speaker added. "It also gives that individual a level of internal comfort, a level of safety, that they’re going to be OK when they’re in average, everyday situations — to not be harassed and to not be questioned, 'Is that who you really are?'"

It's a significant bill that may remind some when transgender New Yorkers were required to prove — through documentation — that they were going through sex-change surgeries in order to officially change their gender. This was a requisite in the Big Apple until 2014. But local politicians, including Johnson, had been working to nix it. Four years ago, the New York City Council speaker sponsored a bill that nullified the requirement.

According to The New York Daily News, he said it was one of his proudest contributions as a speaker. Yet in spite of ending the requirement, New Yorkers are still required getting their doctor's signature for their birth certificates. It's possible this all could change thanks to the passed bill. On Wednesday, it received 41 yes-votes in the New York City Council. Only six voted no.

It's difficult to gauge how New Yorkers will respond to the bill if it indeed becomes law. Perhaps researchers and lawmakers will be able to assess the level of the public's openness through locally-conducted polls. But the city's top-ranking officials have, so far, shown signs that they might just give it the thumbs-up.

In June, de Blasio and Johnson proposed the bill. And it's expected that the mayor will sign it. Back then, he said, "This proposal will allow transgender and gender non-conforming New Yorkers to live with the dignity and respect they deserve." It's this bill, de Blasio noted, that could "make our city fairer."