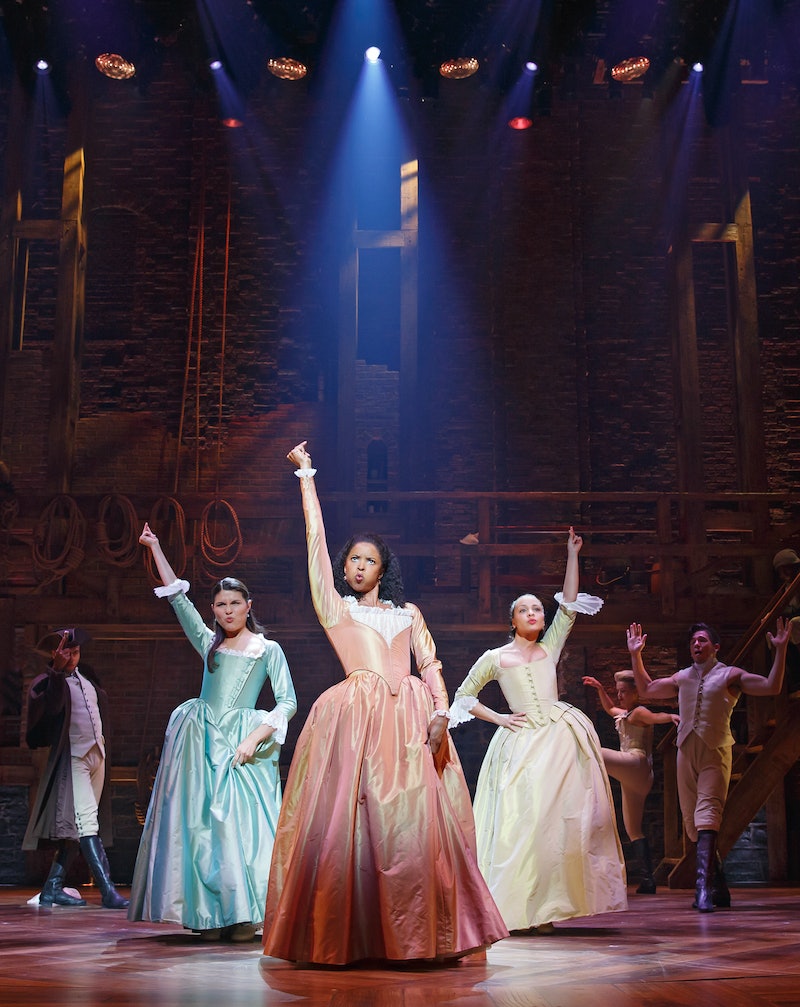 Soon, everyone will get to be in the room where it happened, just six years later. On Monday, Lin-Manuel Miranda announced that a Hamilton movie is coming to theaters in 2021. Technically, it's not a movie in the traditional sense, but it's actually something better — a recording of the original cast's performance that was filmed onstage at The Richard Rodgers Theatre and given a cinematic flare by director Tommy Kail. The movie is being released by Disney on Oct. 15, 2021, so go ahead and mark the day off in your calendars.

Miranda shared how the movie will bring the Broadway experience to viewers everywhere in a press release obtained by Bustle. "I'm so proud of what Tommy Kail has been able to capture in this filmed version of Hamilton — a live theatrical experience that feels just as immediate in your local movie theater," he said "We're excited to partner with Disney to bring the original Broadway company of Hamilton to the largest audience possible."

While some fans may have been holding out for a more traditional movie version of Hamilton, bringing the Broadway show to viewers worldwide at an affordable price is a way of allowing everyone the opportunity to enjoy musical theater. And that in and of itself is priceless to the countless Hamilton devotees who didn't get an opportunity to see the show live with the original cast.

As Miranda explained to Variety in January, this will remove the "brag" from the situation and put the focus back on the art, as well as increase the appreciation for live theater. "You all have that friend who brags, 'I saw that with the original cast,'" he told the outlet. "We're stealing that brag from everyone. You're all gonna see it with the original cast."

Even if you were one of the lucky few to see Hamilton with the original cast, the movie will still offer theater fans an entirely new perspective on the musical. Disney's theatrical release will combine "the best elements of live theater and film" and "the result is a cinematic stage performance that is a wholly new way to experience Hamilton," per the press release. Without a trailer, it's hard to know what that experience will look like in practice, but it's going to be fun to find out.

Hamilton made its Broadway debut on Jan. 20, 2015, and it went on to win 11 Tonys, as well as the Pulitzer Prize for drama. In addition to Miranda, the original cast also included Daveed Diggs, Renée Elise Goldsberry, Leslie Odom, Jr., Jonathan Groff, and Phillipa Soo. And now their award-winning work is going to be experienced on an unprecedented level.

"We are thrilled for fans of the show, and new audiences across the world, to experience what it was like on stage — and in the audience — when we shot this at the Richard Rodgers Theatre on Broadway in June of 2016," Kail said via the press release. "We wanted to give everyone the same seat, which is what this film can provide."

More like this
Everything You Need To Know About ‘Black Panther: Wakanda Forever’
By Bustle Editors
Christian Bale Sang With Taylor Swift & His Daughter Can't Believe It
By Radhika Menon
Lindsay Lohan & Jonathan Bennett Celebrated Mean Girls Day Very Differently
By Jake Viswanath
12 ’90s Movie References You Missed In 'Do Revenge'
By Radhika Menon
Get Even More From Bustle — Sign Up For The Newsletter