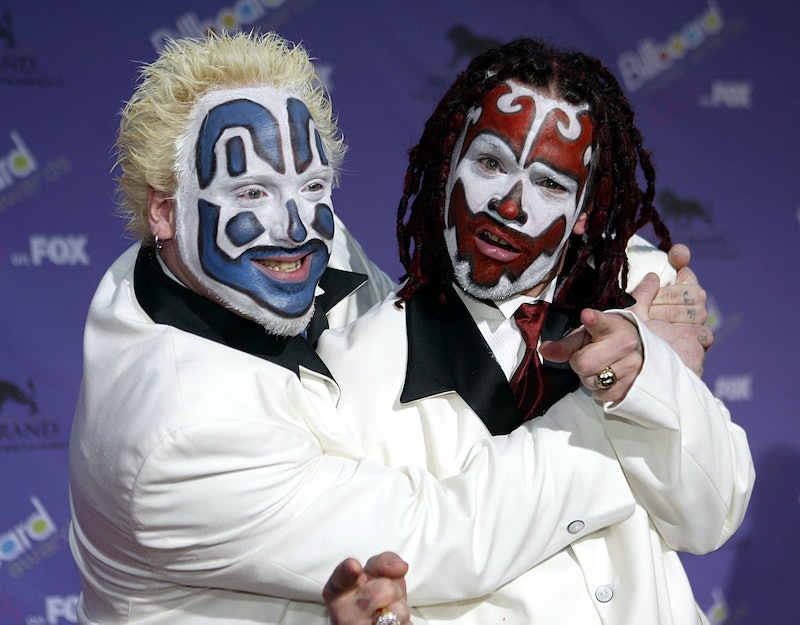 For those who aren't yet fully convinced that we are living in a new era of unpredictability, here's some extra proof: The rapping clowns from the Insane Clown Posse and the Juggalo community are planning a march on Washington. Following on the heels of the wildly successful Women's March on Washington, D.C., Juggalos, fans of the Insane Clown Posse hip hop group, will be taking to the nation's capital to claim their own space in the American landscape. While it may not have the historical significance of the Women's March, which brought hundreds of thousands to the nation's capital, the Juggalo March is certain to be its own landmark event, one that George Washington, John Adams, and Thomas Jefferson could only have dreamed of witnessing.

According to the details on the official Juggalo March website, the march is scheduled to take place on Sept. 16, so all Juggalo supporters have plenty of time to make their travel and lodging. It is scheduled to begin in front of the Lincoln Memorial and will be followed by a concert in Bristow, Virginia, where select bands invited and curated by Psychopathic Records will play a show.

While leading a march on Washington can be a powerful means of challenging a presidency or its policy, the specific focus of this march is not against Donald Trump or his flurry of controversial executive orders. Rather, it stems from the FBI's classification of Juggalos as a "loosely organized hybrid gang," according to the march's website. Yes, in case you haven't stayed up-to-date on Juggalo's critical relationship with the federal government, back in 2011, they were listed in the National Gang Threat Assessment. That prompted the Insane Clown Posse to file a lawsuit against the FBI for that very classification in 2012.

Originally, the case was filed through the American Civil Liberties Union of Michigan and ICP's lawsuit against the FBI was eventually dismissed by a federal judge in Detroit in 2014 on the grounds that Juggalos had no rights to sue the FBI for the gang classification.

However, the tides turned once again in ICP's favor and the Juggalo community at large when ICP won an appeal in the FBI gang lawsuit in September 2015, which then removed Juggalos from the list of government classified gangs.

The upcoming Juggalo March on Washington was organized with the express purpose of reclaiming the Juggalo identity:

That is the date that the Juggalo Family must truly shine and show America and the world that we are not a gang, public menace, cult, or any of the other untrue labels they have attempted to slap on us throughout the years. We must collectively show them that we truly are a family that is united by a shared love of music and fellowship.

While it may not be what the Founding Fathers would have envisioned for the country, the Juggalos are certainly expressing their First Amendment rights and pursuing their own happiness.