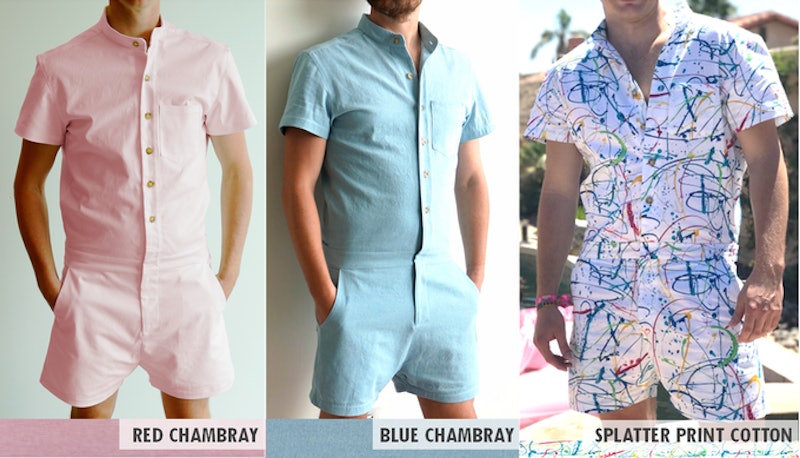 Oh, Internet. What fresh hell have you wrought now? Today's viral news story of the day is particularly creative: A Kickstarter for "RompHim" (AKA rompers for men) launched today, and it's got people talking — let's just say Twitter has a lot of shout-y feelings about the concept and execution of the idea.

Once you check out the actual RompHim campaign (and their British-accented voice over'd trailer), you'll understand why it's got the entire Internet in such a tizzy. Rompers for men aren't necessarily a bad idea (people should get to wear whatever they want), but the way they're presented? Well, it's kind of a different story. The campaign breezily throws around phrases like "super-garment," "revolutionizing men's fashion," and "most flattering contours possible." And since it was created by a bunch of guys who "all go to business school together," who came up for the idea whilst "sitting around drinking beers one evening," it's honestly kind of difficult not to find the whole situation a little bit hilarious.

Most of Twitter seems to be feeling the ridiculousness of it all, though some people definitely support the campaign. As of the writing of this article, it's already passed its $10,000 goal, and it's got a full 29 days left. Still, though: let's take a look at some of Twitter's funniest reactions to the RompHim.

Some were straight to the point.

Some used evocative photoshop to illustrate their feelings on the matter.

Some people went straight for the jugular...

Some used very colorful imagery to describe their feelings.

Some people questioned the marketing techniques.

(Because, LBR, the bro-centric marketing is kind of unfortunate).

Some teased the target demographic.

Some used it as an opportunity to poke fun at 2017's strangest viral trends.

Some pointed out that the RompHim is not exactly a new invention.

Any way you cut it, the RompHim is clearly providing plenty of food for thought for Twitter. And at the end of the day? People should be free to wear whatever they want... so if you love the RompHim, don't let the Tweets drag you down.