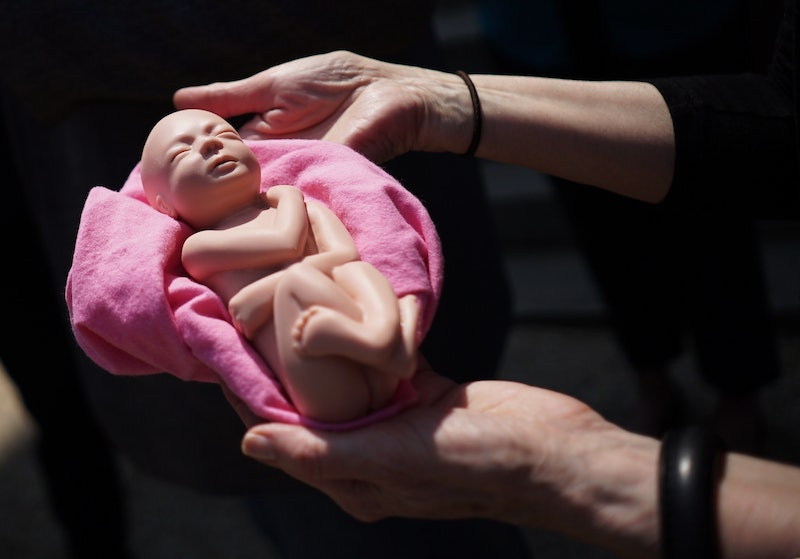 If Ohio lawmakers' efforts to pass a controversial "Heartbeat Bill" in December had you concerned conservative lawmakers would use the election of Donald Trump to launch an aggressive attack women's reproductive rights, an Iowa lawmaker may have totally just validated your fears. The door to attempting to overturn Roe v. Wade opened up just a crack Thursday when Republican Rep. Steven King introduced a national "Heartbeat Bill," which would effectively see abortion banned in the United States, into the House of Representatives.

In a statement released Thursday, King said his bill would "require all physicians, before conducting an abortion, to detect the heartbeat of the unborn child." If a fetal heartbeat can be detected the doctor would be prohibited from performing an abortion.

"Since Roe v. Wade was unconstitutionally decided in 1973, nearly 60 million innocent babies' lives have been ended by the abortion industry, all with a rubber stamp by the federal government," King said in a statement. "Human life, beginning at the moment of conception, is sacred in all of its forms and today, I introduced a bill that will protect the lives of voiceless innocents."

Given the Supreme Court's 1973 ruling in the case of Roe v. Wade, it's hard not to see King's bill as anything other than a blatant challenge to women's reproductive rights. In Roe v. Wade the Supreme Court established the legal standard for abortion to fall at roughly 24 weeks, a time considered to be the gestational point for fetal viability.

If all of this is starting to sound vaguely familiar, that's because it is. The bill King introduced in the House of Representatives on Thursday is a national version of the controversial "Heartbeat Bill" that Ohio state legislatures passed back in December. The bill, which was later vetoed by Ohio Gov. John Kasich, aimed to prohibit abortions as soon as a fetal heartbeat can be detected.

However, because fetal heartbeats can be detected as early as five or six weeks after conception, a time when many women are just discovering they're pregnant, the bill was widely viewed as a total ban on abortion. While concerns the "Heartbeat Bill" would be unable to withstand being challenged in court kept Kasich from signing it, he did sign a 20-week abortion ban into law.

Even if King's national "Heartbeat Bill" fails to pass through the House, it's a concerning sign of what the next four years might mean for abortion and reproductive rights.