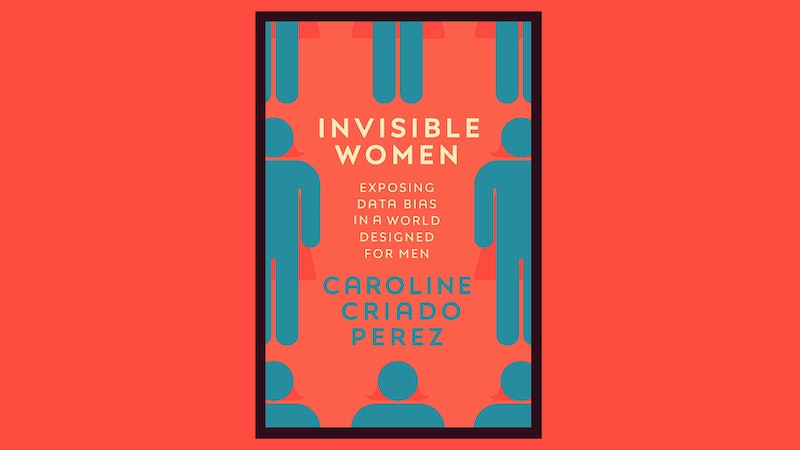 Although it seems like some sections of society are making attempts to tackle misogyny and close the gender pay gap, the way women and men experience life is still vastly different. A new book showing how the world has been designed for men reveals the level of sexism that has permeated everything human beings do. The scariest part is that elements of this ignorance could be life-threatening.

In Invisible Women: Exposing Data Bias in a World Designed For Men, Caroline Criado-Perez explains what she calls the "gender data gap." This is where female experiences have historically been ignored, leading to a lack of data on crucial factors like health and, as a result, inventions that are difficult — if not impossible — for a female-bodied person to use.

The Guardian recently published an excerpt from Invisible Women, which caused quite the reaction on Twitter. In it, Criado-Perez discusses everything from minor difficulties such as a woman struggling to reach a top shelf designed for a man's height to major issues including women dying in car accidents thanks to poorly designed safety features and female police officers having their lives put in danger due to ill-fitting stab vests. The author spent three years researching this topic, curating global case studies and statistics to back up her findings. Some of the examples will open your eyes to everyday struggles that you may never have known, while others will most definitely ring true for you.

Take smartphones, for example. The average size of modern phones is now 5.5 inches. As Criado-Perez states, a man is typically able to use any phone with ease. A woman, on the other hand, will struggle to hold the device. Why? Because her hand isn't much bigger than the phone itself.

Then there's driving. But did you know that a woman is 47 percent more likely to be seriously injured in a car accident? Or that she's 17 percent more likely to die than a man? Criado-Perez did a deep dive into the world of crash dummies. These mannequins are used by car manufacturers to ensure cars are safe enough for human use. The problem is that the vast majority of driver dummies are based on male bodies. This means that cars are potentially be dangerous for women, who typically sit closer to the steering wheel and are typically lighter in weight than the average man. Even the so-called "female" dummies are just a scaled-down version of the male design.

If that wasn't eye-opening enough, further research carried out by Criado-Perez revealed that medicine is biased in more ways than you may have realised. As the Times reports in its review of Invisible Women, heart-attack symptoms known to the wider public rarely relate to women. While men may experience chest pains, women tend to report stomach pains, nausea, and breathlessness. This means women are 60 percent more likely to be misdiagnosed, resulting in potentially preventable deaths.

Twitter in particular was enraged at another of Criado-Perez's findings, which stated that Viagra was found to give "total relief for serious period pain over four hours." But an all-male review panel dismissed this, saying that further funding wasn't necessary because cramps weren't a public health priority, states the Times.

The entire book is a testament to just how often women been kicked aside. If ever there was a truly vital read, this is it.

Invisible Women: Exposing Data Bias in a World Designed For Men by Caroline Criado-Perez will be published March 7.