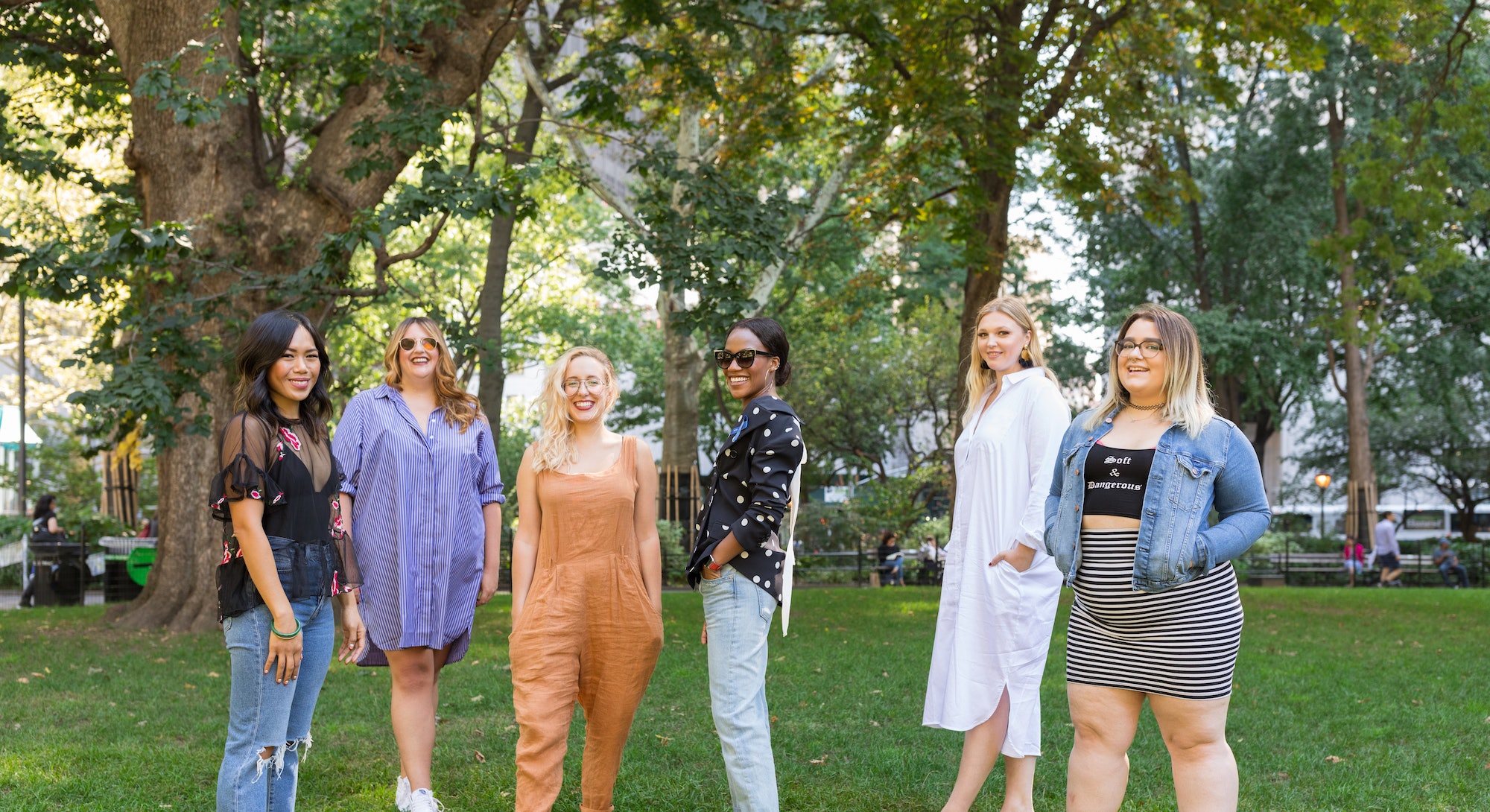 I have spent most of my fashion existence limiting myself to twin sets (in the '90s), V-neck long-sleeve tees (in the 2000s), and wrap dresses (present), simply because I was told by the media, by peers, and by fashion icons that other, more interesting items on the rack weren't for me. Because, why, they just didn't "flatter" my figure.

Certainly, this is a familiar experience for any person who spent their childhood paging through magazines that told them exactly what not to wear if they were "slim-figured," "pear-shaped," or "large-busted." (As if there are only three distinct body types.) But it's our goal to see this form of fashion exclusion go completely out of style. That's why, starting this year, Bustle will officially ban the word "flattering" from its editorial content as it relates to appearance.

It might surprise some to think of "flattering" as a dangerous word — after all, it's often used as a compliment, right? But the perceived positivity surrounding "flattering" is what can make the word all the more harmful. As outlined by Lesley Kinzel's 2012 book, Two Whole Cakes, "flattering" — which has been shunned by the fat and body pos communities for years — is "code for opinions that might be offensive or hurtful if stated in clearer terms."

When we say something is unflattering, we're often trying to deliver bad news in a polite way, by deflecting blame from the body to the garment, in spite of the fact that most of us are going to secretly blame the body anyway.

"Flattering" is a form of subtle body-shaming — it's used all too frequently on glossy covers, on the red carpet, and, yes, by your friends and relatives to imply an ultimate goal of thinness. Just look at the definition of the idiom "flatter one's figure": "Fig. To make one look thin or to make one's figure look better than it is." Better, in this case, does not equal cool, badass, or stunning — it equals thinner.

And if there's anything worse than a word that encourages us to shrink ourselves, it's a word that asks us to constantly evaluate ourselves. Picking clothes based on how "flattering" they are for our body has required us to inspect and criticize every inch of our beings. As Kinzel noted in 2012,

Women in particular are prone to directing their anger at themselves rather than at the pair of jeans that fails to fit both their hips and waist at the same time, as though the jeans' expectations must necessarily prevail over the actual dimensions of the body you've had for your entire life. If the jeans don't fit, it must be your fault. You should change to fit them, because the jeans are in charge here.

When shopping, the biggest questions hovering over our heads don't involve the price tag, whether we have enough closet space for a new wardrobe, or whether that piece we're coveting was produced in an ethical fashion. Instead, we find ourselves asking: Does this shirt flatter my neckline? Does this dress flatter my ankles? Does this ring flatter my finger? (I really wish I were joking about that last example, but I actually have asked myself this in the past.) Making "flattering" such a pervasive word in fashion forces women to not only limit themselves, but constantly question themselves.

So, that led us to ask a more productive question: Why not avoid "flattering" altogether? Since launching in 2013, we've championed women wearing whatever they want, wherever they want, societal norms be damned. That will never change. The one thing that will? We're following the very necessary and inspiring lead of the fat and body pos communities and vowing that you will never see "flattering" in the context of looks written on our pages (or on the pages of Bustle Digital Group's sister sites, Elite Daily and Romper).

Though we have certainly avoided using the word in years past (something that was quite easy to do), we're making it official: When you check out cool trends on our site, or get inspiration from our editors or fashion stars we love, you won't be subject to terminology that makes you feel lesser or left out. Instead, we'll only champion your style — and get inspired by it ourselves.