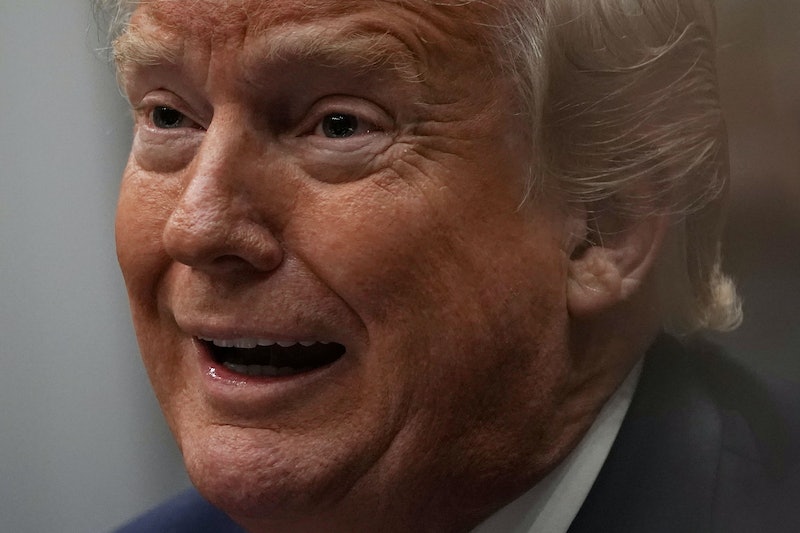 When the journalist famous for breaking open the Watergate scandal speaks, you listen. On Sept. 11, a new book about the Trump presidency by the one and only Bob Woodward is set to be published, and it contains some extraordinary claims about the sitting president. According to Woodward's account, President Trump reportedly called Obama a "weak dick" over Obama's conduct regarding Syria — and that's far from the only mind-bending story within the book's 448 pages.

CNN obtained a copy of the forthcoming book, Fear: Trump in the White House, and according to its account, Obama isn't the only recipient of Trump's frequent insults. Others — ranging from frequent Twitter target Jeff Sessions to Trump defender Rudy Giuliani — have also reportedly been the on the receiving end of the president's colorful insults. The reported insults weren't what aides found the most terrifying, though, according to CNN. Foreign policy — including policy on Syria — is one of the areas where Trump's conduct sparked the most fear among his aides, according to Woodward.

Bustle has reached out to the White House for comment on the book. According to the transcript of a phone call between Woodward and the president, Trump said, "So we’re going to have a very inaccurate book, and that’s too bad. "

The president has made some very rash statements on Syria that his aides had to covertly push back against, according to the Washington Post, which also obtained a copy of the book.

“Let’s f****** kill him! Let’s go in. Let’s kill the f****** lot of them,” the Post writes that Trump said after Syrian dictator Bashar al-Assad launched a chemical attack on his own citizens in April 2017. According to Woodward's account as reported by the Post, Defense Secretary Jim Mattis told Trump that he would move forward on assassinating Assad. Immediately after he got off the phone with the president, though, Mattis told an aide that “We’re not going to do any of that. We’re going to be much more measured.”

In another case, Trump complained to Mattis about the resources the U.S. government was spending to keep troops in South Korea, suggesting that it was unnecessary, the Post wrote.

“We’re doing this in order to prevent World War III,” Mattis told Trump. According to the Post's account of the book, Woodward then wrote that Mattis remarked that Trump "had the understanding of a fifth- or sixth-grader" on this matter.

For Trump's former lawyer, John Dowd, even the president's potential testimony to Mueller could be a matter of national security. According to the Post and CNN, the president's lawyers met with Mueller personally to act out the president's mock testimony and argue that he was not fit to testify before the special counsel.

“I’m not going to sit there and let him look like an idiot. And you publish that transcript, because everything leaks in Washington," Dowd said to Mueller, according to the Post. "And the guys overseas are going to say, ‘I told you he was an idiot. I told you he was a goddamn dumbbell. What are we dealing with this idiot for?’”

According to the Post's account, Mueller then said that he understood.