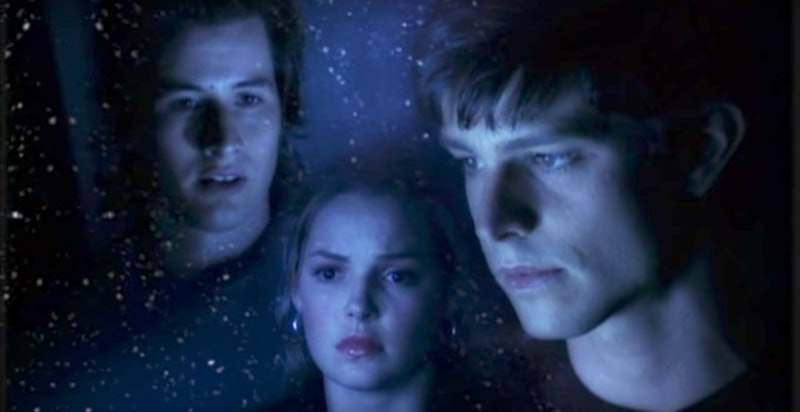 Well, folks, it looks like the revival trend won't be dying down any time soon. According to Variety, the early 2000s sci-fi Roswell is getting a reboot, this time from teen-focused powerhouse The CW. There will, however, be a modern twist: The main character will reportedly be the child of two undocumented immigrants, giving the project some timely real-world resonance. But updates (or lack thereof, depending on how you view it) aside, the reaction thus far has been mixed.

Like the original series — which aired three seasons from 1999 to 2002 — it will be based on Melinda Metz's Roswell High book series, and it keeps that story relatively intact. The CW take will follow a woman who reluctantly turns to her hometown of Roswell, New Mexico, only to discover that her teenage crush turned police officer has been quietly hiding a big secret: He’s an alien, who has kept his unearthly abilities hidden for his entire life. As they reconnect, they begin to investigate his origins, but, according to the logline from Variety, "When a violent attack and long-standing government cover-up point to a greater alien presence on Earth, the politics of fear and hatred threaten to expose him and destroy their deepening romance." The Originals' Carina MacKenzie will executive produce the one-hour drama.

Shiri Appleby (UnREAL) initially starred as Liz Parker, the human who fell in love with Jason Behr's (Sherman Oaks) extraterrestrial Max Evans, while Katherine Heigl (Grey's Anatomy) and Brendan Fehr (The Night Shift, Wyonna Earp) played alien/human hybrids. No casting information has been announced for the reboot, though it sounds like the characters will be older. In the original, they were all teenagers, but the fact that the star of the show will be "returning" home suggests she's at least gone away to college.

As news of the reboot spreads, some fans have expressed excitement, others have aired their outrage, and even more have conveyed mixed feelings.

This Fan Couldn't Contain Herself

All caps are the token sign of a stan.

This One Was Less Hopeful

Well, with that attitude...

And This One Was Just Confused

It's a lot to process.

There's a lot left to answer.

And Some Were Flat-Out Angry

This is a passionate fan base, y'all.

Many Wished It Was Truer To The Original

Anyone else may pale in comparison.

At least they know what they want?

Some Thought It Proved Hollywood Was Out Of Ideas

Also in the works this season are reboots of The Nice Guys, True Lies, The Jetsons, The Munsters, Starsky and Hutch, and Party of Five, not to mention the slew of others that have already hit screens.

But Mostly, People Are Praying The CW Doesn't Ruin It

Expectations are high, so the CW better come through.

As a producer for The Originals, MacKenzie certainly has experience in the supernatural/sci-fi realm, but reboots are a tricky business. Not only are they currently saturating the television landscape — thus tempering demand — but so far, they've been largely hit or miss. The Twin Peaks revival was widely well received, while others — like the critically derided Lethal Weapon and the woefully short-lived 24: Legacy — haven't fared as well. Even The CW's own Dynasty, a modern spin on the '80s soap of the same name that premiered Tuesday, has been met with a lukewarm response.

All of which isn't to say that MacKenzie can't pull it off, but the cards are certainly stacked against her, and the stakes are high. For now, fans will just have to keep their fingers crossed.

More like this
A New 'And Just Like That' Table Read Pic Confirms A Key Character's Return
By Jack Irvin and Grace Wehniainen
24 Years Ago, 'Friends' Dropped Its Most Underrated Ross & Rachel Episode
By Grace Wehniainen
The 'Skins' Cast Shared The Reunion We’ve Been Waiting For
By Sophie McEvoy
Netflix Reveals First Look At Wednesday In The 'Addams Family' Spinoff Series
By Bustle Editors
Get Even More From Bustle — Sign Up For The Newsletter